The China Nexus: Thirty Years in and around the Chinese Communist Party’s Tyranny

The China Nexus: Thirty Years in and around the Chinese Communist Party’s Tyranny
By Benedict Rogers
November 17, 2022

The challenges facing US industrial dynamism today extend beyond the unforced error of a failure to invest at home. They are also a product of the Chinese Communist Party’s market distortions, and effort to control the productive forces of a new industrial revolution: Rebuilding domestic industry will demand equal parts protection and promotion.

This reality – as the following book excerpt details – is increasingly realized, and across the political spectrum. US leadership has begun to acknowledge that the US is locked in an international competition that both raises the imperative of domestic investment and defines how that investment must be allocated.

The below is excerpted, with an introduction by the publisher, from Benedict Rogers’s forthcoming The China Nexus: Thirty Years in and around the Chinese Communist Party’s Tyranny, a story of decades spent pushing back against Beijing’s human rights atrocities, and, more recently, the dawn of a new domestic and international resolve to hold China accountable.  The China Nexus was released in the United States on November 5, 2022; more information is available here.

Benedict Rogers is a human rights activist, journalist and author. After the pro-democracy protests, he formed Hong Kong Watch with several colleagues in London in 2017, which led to the yellow umbrella movement. In October 2017, Mr. Rogers was denied entry to Hong Kong and immediately sent on a flight out of the country.

His work on exposing the CCP’s repression and violent takeover of Hong Kong led to the most blatant and egregious form of transnational repression. On March 10, he received a letter from the Hong Kong Authority threatening him with up to a 100,000 HKD fine and from three years to life imprisonment if he did not take down the Hong Kong Watch website and cease his activities highlighting repression and promoting freedom and democracy in Hong Kong. 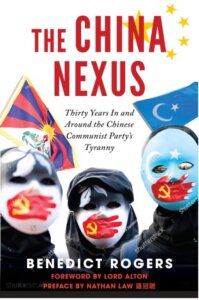 American policymakers need to understand that trading off cheap goods from China to placate a CCP under the leadership of Xi can not yield the desired long-term economic or security outcomes that address American and the free world’s needs. This book should be a wake-up call for all those that had any doubt that China’s nationalist ambitions are playing out against every minority diaspora group in China and that China’s hybrid warfare against America marches forward. Beijing’s goal to be the pre-dominant global hegemony by 2049 is well on track.

The China Nexus: Thirty Years in and around the Chinese Communist Party’s Tyranny

Of course, the China challenge has resulted in changes, of varying degrees, across capitals throughout the free world. Nowhere more so than in the United States.

Mary Kissel, who served as senior advisor to Mike Pompeo when he was Secretary of State, played a key role behind the scenes in bringing about changes in US-China policy. She believes that “the Trump administration did more to advance human rights in China than any other administration in recent history.” …

A starting point, said Kissel, was that they “spoke very honestly about the nature of the Chinese Communist Party regime.” Diplomatic niceties went out of the window. “We called it totalitarian and brutal. We called it for what it was. We did it repeatedly. And that had never really been done before,” she told me in an online call from New York. “That was very important, because one of the fundamentals, if you want to advance human rights, is you have to recognize what the situation is on the ground. And we did that. We changed not just Americans’ view of Communist China, but the world’s. We lifted the veil.”

The genocide designation was especially significant and entailed a big debate before the conclusion was reached. “Secretary Pompeo is a Harvard Law School-trained attorney, so he read all the legal opinions about whether or not this constituted genocide, and he concluded that it did,” Kissel said. “That was within his power, but it was a very courageous thing to do because it ran against the bureaucratic instinct of the State Department, large portions of which did not support that decision.”

…. Within hours of Pompeo’s decision, his Democrat successor, Antony Blinken, confirmed the genocide designation, a clear sign that China is the one issue that genuinely unites Republicans and Democrats in Washington, DC. “Politics in the US has turned determinably sour towards the Chinese Communist regime,” Brownback said. “The Biden administration could not back away from the genocide determination without being seen as soft on China. And this is a key point—when you turn from one party to the next in the administration and maintain policy continuity, this is golden. It is what we did for years against the Soviet Union. The Republicans and Democrats both agreed that we had to confront the Soviet Union.”

There may be differences in rhetoric and approach, but both parties are, according to Brownback, united in recognition of the need to “confront” Beijing. Derek Mitchell, former US ambassador to Myanmar under President Barack Obama’s administration and now president of the National Democratic Institute (NDI), agrees. “President Biden and Secretary Blinken believe that the defining challenge in the twenty-first century is between autocracy and democracy, and China is viewed as the most aggressive and best resourced of those challenges, and the one with the largest reach,” he said. “Xi Jinping has helped to unite people in the United States, and elsewhere, and helped us to wake up to what China really is and the challenge the Chinese Communist Party really poses. There is no mask anymore. The ‘wolf warrior’ diplomats are doing themselves no favours; they are exacerbating the problem.”

China, argues Mitchell, “has something for everybody” in terms of challenges. “It has something for the left, middle, and right. When it comes to human rights, security challenges, Taiwan, climate change—every part of the spectrum is affected by the Chinese regime’s arrogance, aggression, illiberal triumphalism, and expansionism. The more Xi Jinping becomes Maoist and repressive, and expands his Orwellian State, the more his regime’s actions unite the world against China.”

Carolyn Bartholomew, former chief of staff to the Speaker of the House of Representatives Nancy Pelosi and former chair of the US-China Economic and Security Review Commission (USCC), believes the debate has shifted so much that people previously regarded as “hawkish” outliers “are no longer outliers.” Despite being a lifelong Democrat, she credits the Trump administration with “raising the visibility of the challenge,” even if she did not always agree with their tactics. “The previous administration paved the way for President Biden to break away from the Clinton– and Obama–era terms of engagement with China,” she told me in a call from Washington, DC.

Perhaps one way in which the Biden administration’s approach might be perceived to differ is in terms of multilateral efforts. “The Biden administration is rebuilding alliances, especially with Japan, Australia, and India,” Bartholomew argues. Mitchell agrees. “The Chinese regime would love to make it about ‘great power’ competition between China and the United States. The more we can make it about the world versus the Chinese regime, the democratic world versus the autocratic world, and about values, the more we are able to ally ourselves with the billions of people who want a voice and want freedom. We actually care about others’ freedom and sovereignty, whereas China clearly does not. Beijing’s talking points mouth this ‘win-win’ narrative, but the world now sees China for what it is. China simply wants to get out of other countries whatever it can for its own interests.”

Kissel, however, disagrees with the perception that the Trump administration did not pursue a multilateral approach. “There were many multilateral actions we took, most importantly at the United Nations,” she said. “We organized a letter in Geneva with dozens of other nations to denounce the genocide of the Uyghurs, and we shared information with our partners all the time.”

Kelley Eckels Currie served as the US representative to the United Nations Economic and Social Council and, for four months, acting deputy ambassador to the United Nations, before she became ambassador-at-large for global women’s issues. A long-time Tibet advocate, she was familiar with China’s tactics, particularly how they operate within the UN, but she was surprised to find “the extent to which China had really infiltrated all of the permanent institutions of the UN,” particularly the human rights and development spaces. “China is working hard through various means to shape these institutions and the normative frameworks around them,” Currie told me. “From the UN Secretariat to the member state bodies like the General Assembly, the Security Council, and the Human Rights Council, to the funding bodies, programmes, and agencies, China is making inroads.” They have done this particularly by “hitching the Belt and Road Initiative to the sustainable development goals (SDGs), and claiming that it is just one giant SDG-empowering machine.”

The current UN Secretary-General Antonio Guterres has, Currie claims, “bought into this agenda.” Or perhaps it would be more accurate to say he “was bought” into it. In 2016, China announced it would donate a billion dollars to the UN, with a payment of 20 million USD per year, ostensibly for peace, security, and development. According to Currie, 10 million USD of this goes straight to the office of the secretary-general, “basically for his personal use to do whatever he wanted, with no oversight from anybody other than his office and the Chinese government.”

China “co-opted” Guterres, she adds, and he thought—as many do—that co-operation with China on climate change, development, and other key issues would be successful. “It did not help that the US administration was led by Donald Trump, who was the opposite of the ‘Davos man’ that Guterres wants to be,” said Currie. “The US was pulling out of the Paris Accord on climate change, pulling out of various UN agencies, demanding that the UN be financially accountable and more transparent, criticizing the waste and fraud in the system. The Chinese took total advantage of that, flattered Guterres’s ego, gave him prominent roles in these Belt and Road forums, and co-opted the UN’s buzzwords, claiming they were there to defend multilateralism and globalization.”

The UN’s Department of Economic and Social Affairs (DESA), in particular, is a “Chinese fiefdom,” run by a Chinese official for many years, according to Currie. The other half of China’s 20 million USD a year to the UN goes to this department, “for the explicit purpose of advancing the Belt and Road Initiative within the UN system.” The only people who decide how these funds are spent, she adds, are the secretary-general, his chief of staff, the Chinese permanent representative to the UN, China’s Ministry of Commerce and Foreign Ministry, and the auditors. “It is horrifying. It is a Chinese slush fund,” she said.

One of the biggest battles Currie fought at the UN was over the plight of the Uyghurs. That was when Guterres proved to her “in spectacular fashion” that he was “truly, truly awful” and that “the Chinese own him.”

Benedict Rogers is a human rights activist and writer specializing in Asian policy and geopolitics. He is the co-founder and Chief Executive Officer of Hong Kong Watch, Senior Analyst for East Asia at CSW, an advisor to the Inter-Parliamentary Alliance on China (IPAC), the Stop Uyghur Genocide Campaign and several other charities, and Deputy Chair of the UK Conservative Party Human Rights Commission.

Rogers is a regular contributor to national and international publications including The Wall Street Journal, The Daily Telegraph, The Spectator, The Diplomat, Foreign Policy and The Tablet. He has appeared regularly on the BBC, Al-Jazeera, CNBC, Sky News and other television and radio broadcasts, contributed to an Intelligence Squared podcast, and testified in the UK Parliament, the European Parliament, the Japanese Parliament and the US Congress. He regularly briefs and advises Parliamentarians and policymakers around the world. More information on and purchase options for The China Nexus are available here.