Recent events, such as Russia’s invasion of the Ukraine, the global pandemic, and domestic mass shootings have distracted many people. But the long term geopolitical reality has not changed. Nor has the dominant danger in it: The rise of China and the power of its inherently different form of capitalism.  China’s ability to manage its economy and undermine the American capitalist model is still strong.

What to do to improve the American model follows. 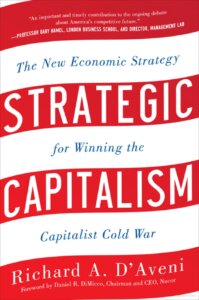 The below is excerpted, for Force Distance Times, from Richard d’Aveni’s 2012. “Strategic Capitalism: The New Economic Strategy for Winning the Capitalist Cold War,” a prescient call to arms even more relevant now than it was a decade ago, and that offers a competitive framework for how the United States can compete, and win. One of the country’s foremost economic strategists, Richard A. D’Aveni is the Emeritus Bakala Professor of Strategy at Dartmouth’s Tuck School of Business.

An Era of Hypercompetition

The core principle guiding today’s economic cold war is hypercompetition. No nation can establish a sustainable competitive position – a spot so strong that leaders can turn their attention to other things. Instead, nations must vie continuously for ways to shape the rules of capitalism and undermine rivals with incompatible capitalist systems. The way for countries to get ahead is the same as that for businesses: be the first to upend the economic apple cart, in this case the prevailing capitalist system. National leaders cannot sustain an advantage by practicing defense. They must go on the offense, disrupt the rival version of capitalism, and force other countries to play catch-up.

Witness how Korea seized the lead in the dynamic random access memory (DRAM) semiconductor business from Japan in the mid-1990s (after Japan seized it from the United States in the 1980s). Korea incorporated into its capitalist system a series of state-guided efforts to enter the chip industry. Witness how Japan, particularly Toyota, now relentlessly upgrades it manufacturing expertise. Japan, a heavy practitioner of managed capitalism, also encourages the innovative forces of laissez-faire capitalism, to help Toyota achieve success. And witness how Germany has won by reworking its mix of laissez-faire, managed, and social-market capitalism, in particular by reining in an over-indulgence in social-market benefits. Witness how China has wrested the solar-panel business from Germany and the United States, as China’s leaders specifically targeted national investment to support the building of emerging energy technologies and undermine the advantage of technological leaders, creating a larger domestic market with regulations and using subsidies to throw the advantage toward Chinese firms. 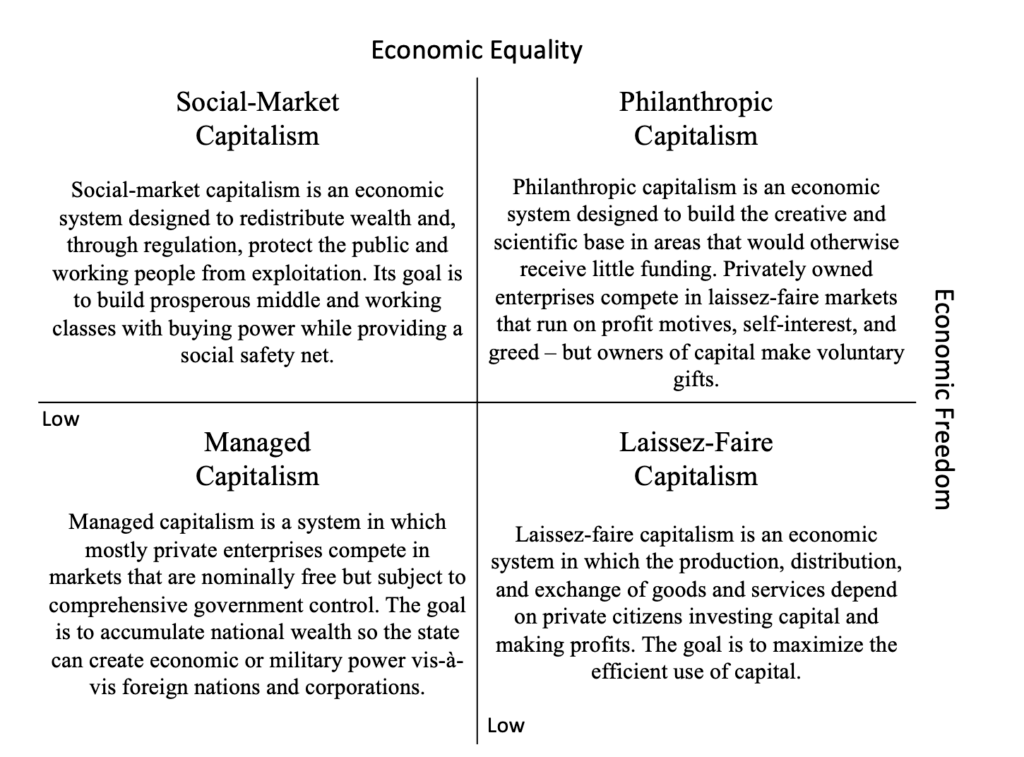 All these countries have been thinking through moves and countermoves among the capitalist systems, not just leaving strategy to their corporations. They have seized the initiative so that they land most of the punches, reducing their rivals to absorbing competitive blows. They have done all this through a methodological strategy to create a superior capitalist system and build superior economic power.

Successful national leaders benchmark and target the best practices in the capitalist systems of their rivals, change the way they think and work, and lead the work to ever-increasing levels of competition based on what they have learned about how capitalist systems compete. As in every other aspect of life today, national leaders must steadily improve their game if they want to stay in the game. They must grasp the imperative of hypercompetition between national capitalist systems, they must overcome fear and exercise imagination, and they must help their nations grow while others language.

Strategic Capitalism for the United States

Hypercompetition is a hardball competition. Going on the offensive with hypercompetition does not take a big economy, as Korea and Germany have shown. It just takes a smart strategy that recognizes – and acts on – the facts of capitalist systems in conflict. Let me highlight ten of the key counterintuitive or surprising strategic actions that US leaders might evaluate and undertake to strengthen the American capitalist system – and engage in today’s hypercompetition.

As this list makes clear, national leaders have to embrace economic realpolitik and dynamic strategic action if they are to succeed. The job is much bigger than many policy makers believe, as it encompasses economics politics, diplomacy, defense, and other policies. But by thinking big, the United States and other nations can retain and advance the competitive positions of their countries.

The above is excerpted for Force Distance Times from Richard D’Aveni’s 2012 “Strategic Capitalism: The New Economic Strategy for Winning the Capitalist Cold War,” a prescient call to arms even more relevant now than it was a decade ago, and that offers a competitive framework for how the United States can compete, and win. One of the country’s foremost economic strategists, Richard A. D’Aveni is the Emeritus Bakala Professor of Strategy at Dartmouth’s Tuck School of Business. He holds a Ph.D. from Columbia University and a bachelor’s degree from Cornell University, as well as a law degree and MBA. His 2018 The Pan-Industrial Revolution: How New Manufacturing Titans Will Transform the World, explains the strategic implications of recent advances in additive manufacturing.