Geopolitics goes back to basics: Zimbabwe bans lithium exports, just the latest example of mineral nationalism — while the EU imposes a(n easily evaded) gas price cap, China and India snap up cheap Russian fuels, and the US moves forward on a strategic uranium reserve. Plus Myanmar and Russia coordinate on nuclear energy, the Bank of Japan shocks investors, and the US promises that it’s paying attention to Africa.

Zimbabwe has banned the export of raw, unprocessed lithium. The government says it wants to capture more of the value of the mined mineral domestically – and further develop its domestic supply chain from mining to refining, processing, and battery production.

The move is the latest example of mineral nationalism as resource-rich countries seek to ride the clean energy transition wave to increase revenues and upgrade domestic industries. Indonesia is following a similar playbook: It banned the export of nickel ore earlier this year (and is now appealing a WTO ruling against the ban), and this week extended the ban to include bauxite, the world’s primary source of aluminum.

And if China is any guide, these countries’ mineral export bans and quotas could eventually encompass limits on the export of processed minerals as well, in turn giving domestic downstream users of those products a leg-up over foreign competitors.

That said, the soaring prices of minerals – which are at least part of the driving force behind recent export bans – may well temper somewhat. In its latest quarterly report, the Australia government projected lithium prices to face a sharp pullback in 2024. But given the spectacular rise in lithium prices since 2021, any softening will still leave prices far above where they were at the turn of the decade.

Plus, companies are still betting on surging demand and scrambling to secure supplies. Just this week, the Canada-headquartered Lithium Americas offered to acquire more shares in Arena Minerals, which owns lithium assets in Argentina. A subsidiary of China’s Ganfeng Lithium will sell its stake in Arena before Lithium Americas closes its deal. 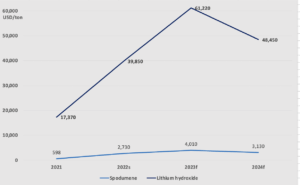 Source: Australian Department of Industry, Science and Resources Note: 2022 prices are estimates; 2023 and 2024 prices are forecasts

Europe’s gas price cap and how to evade it

After months of debate, the EU this week finally agreed on a gas price cap designed to help the bloc tackle an energy crisis. The cap is triggered if Europe’s benchmark gas price, the Dutch Title Transfer Facility (TTF) gas hub’s front-month contract, exceeds 180 euros per megawatt hour and is 35 euros/MWh higher than LNG prices for three days. Effectively, the provision means that the price at which gas can be traded is capped, but the capped level can fluctuate alongside global LNG prices so that EU countries can still bid at competitive prices on global markets.

Russia is unhappy with the cap. Hungary voted against it. And the Intercontinental Exchange, which hosts the Dutch Title Transfer Facility (TTF) gas hub, has warned it may relocate the hub outside of the EU as a result of the price cap.

Disagreements over the gas price cap aside, it may ultimately prove easy to dodge, undermining EU efforts to tame energy prices. Analysts say that traders can evade the cap by switching contracts. Another loophole: Traders can simply move their gas trading off energy exchanges and conduct private transactions instead.

Meanwhile, shipments of Russian seaborne crude oil have plunged in the first full week since the EU’s ban on such imports took effect on December 5, according to vessel tracking data monitored by Bloomberg.

Key beneficiaries of the EU import ban, and its associated price cap of 60 USD per barrel, are India and China. The former is buying barrels of Russian Urals below the cap, while refiners from the latter are bidding at lower prices as Moscow diverts West-bound crude to Asia. China is also snapping up record amounts of Russian LNG and coal.

Moscow is certainly keen to find an energy-hungry customer in China. This week, Russian president Vladimir Putin oversaw the launch of a major new Siberian gas field that will feed the existing Power of Siberia pipeline transporting Russian gas to China.

As we noted last week, the US government is now soliciting bids from domestic suppliers for 3 million barrels of oil. That purchase will go toward replenishing the nation’s Strategic Petroleum Reserve, sales from which are set to end this month.

So far, it appears Washington has successfully sold high and bought low: It sold 180 million barrels of crude at an average of $96.25 apiece, versus the recent market price of $74.29, netting the government a $4 billion gain.

…and the US strategic uranium reserve makes landfall?

Earlier this year, the US Department of Energy solicited bids for 1 million pounds of domestically-produced uranium to begin building a national reserve of the heavy metal that’s the most widely used fuel for nuclear power plants.

Now, the first contracts have been awarded to begin filling the strategic uranium reserve. Five US companies so far have been selected to supply uranium: Energy Fuels; Strata Energy, the US subsidiary of Australia-based Peninsula Energy; enCore Energy; Ur Energy; and Uranium Energy.

As we recently noted, US uranium production has fallen steeply since peaking in 1980, and the country is now 95% import dependent on uranium for nuclear plants. A uranium reserve is no panacea, but could provide some support for restarting domestic nuclear fuel production.

The Bank of Japan shocked investors this week with an unexpected policy move: It widened its tolerance band for yields on 10-year Japanese government bonds (JGBs) to half a percentage point above or below the 0% target, twice as much as before.

What to make of this move is a matter of debate. The official line is that bond market functioning had worsened, as evidenced by a kink that meant yields on 10-year government bonds were slightly lower than yields on 8-year and 9-year bonds. Meanwhile, many analysts and traders are skeptical of this explanation; they see it as a hawkish pivot as Japan – even Japan! – contends with the global forces of inflation. Others disagree, arguing that adjusting yield curve parameters while ramping up government bond purchases is nothing like monetary tightening. One thing that most seem to agree on: the Bank of Japan’s move this week has implications for monetary policy worldwide. 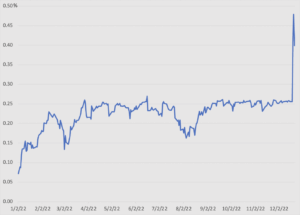 Last week’s US-Africa Leaders Summit in Washington, which brought together presidents from dozens of African nations, culminated in some $15 billion worth of deals and dozens of billions of dollars more in commitments by the US to invest in the continent over the next three years. Those deals covered areas including health, infrastructure, critical minerals, clean energy, governance, and food security.

A key message that emerged from the three-day gathering: Washington is, at least from a narrative perspective, back in the business of re-engaging in Africa. Or as US commerce secretary Gina Raimondo put it, the US-Africa commercial relationship is at a “tipping point.”

The undercurrent that can’t be ignored here is great power competition: The West needs to counter China’s political and economic influence in Africa. And it’s not just the US that’s increasing engagement. The week before the summit, Germany announced it would increase state investment guarantees for investments in Africa.

“The ice thaws but slowly,” Australian foreign minister Penny Wong told a reporter this week on her visit to Beijing to meet her Chinese counterpart Wang Yi. The two countries have been working for months to thaw diplomatic relations, which have been at their worst in decades after Beijing weaponized trade and took a series of coercive and punitive actions to retaliate against Canberra’s call for a probe into COVID-19 origins.

Both countries’ officials say they want to improve trade relations. That would require far more than China’s rollback of unwarranted trade restrictions. It demands, among other things, a full reckoning with Beijing’s continued campaign of interference in Australian politics and its increasing military intimidation of others in the Indo-Pacific and elsewhere. And with 63% of Australians seeing China as more of a security threat than an economic partner, the bottom line is obvious: Australia needs less, not more, economic tie with China. 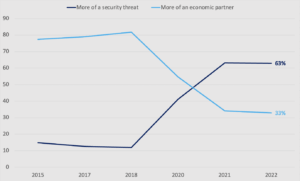 That crisis has been a long time in the making. For decades, the country sold off its energy resources abroad for scraps instead of developing infrastructure at home. Now, with the added pressures of COVID-19, the Russia-Ukraine war, and the country’s military coup in 2021, Myanmar’s fragile energy sector has been hit this year with months of daily, rolling blackouts.

Russia-Myanmar energy ties may grow closer yet – particularly as both countries have become international pariahs, shunned by government and private investors. Yangon is already in talks with Moscow on fuel imports. Further collaboration on nuclear reactors would grant Russia an even larger energy footprint in Myanmar.

2022-12-25T11:56:17-05:00#Bank of Japan #Energy #EU #lithium |
FacebookTwitterEmailPrint this page
Force Distance Times Dispatch
Subscribe to the Force Distance Times weekly newsletter to keep up to date on our latest commentary
We respect your privacy