Is US manufacturing in a recession? China’s re-opening pushes copper prices up, Europe rushes to Russian diesel as the oil product import ban nears, and Bolivia picks China’s CATL to develop its lithium salt flats, while the UK’s Britishvolt battery startup collapses. Plus: More bad news for food production and a new wrinkle in the China-Indonesia relationship.

The US industrial base wobbles

Industrial production in the US is sputtering. It fell 0.7% in December—the sharpest decline since September 2021, according to the latest data from the Federal Reserve. Manufacturing output dropped 1.3% last month, the second consecutive month of contraction following a 1.1% decrease in November.

Meanwhile, mining output also contracted, falling 0.9% in December following a 1.2% decrease the prior month. Only utilities production recorded growth, notching an increase of 3.8% as cold weather boosted demand for heating.

Weighing on production is the Fed’s continued monetary tightening campaign. Manufacturing’s weakness is also reflected in overall capacity utilization, which fell to 77.5 percent for manufacturing from 78.5 percent in November. Mining capacity utilization also contracted, falling to 87.7 from 88.6 percent. Another flashing alarm sign: The New York Fed’s Empire State manufacturing index plunged from -11.2 in December to -32.9 in January, the lowest level since May 2020.

It’s possible that US manufacturing has already entered into a recession, based on the Fed’s data and other indicators like container freight volumes at ports and on railroads, and new orders reported by manufacturers in the Institute of Supply Management’s survey.

These latest developments are worrying, to say the least, given the urgent need to revamp the US industrial base. That’s not to mention that fixing supply will help address inflation, while increased critical minerals output is crucial for America’s energy security. And, more urgently, American arms makers have struggled to keep pace with Ukraine’s demand for artillery, forcing the US to dip into ammunition stockpiles stored overseas.

Copper prices are on a tear, having risen this week to the highest levels since June as investors bet that China’s pandemic reopening will boost demand and drive up prices amid low inventories. On New York’s Comex market, copper for March delivery touched 4.35 USD per pound (9,581 per ton). Still, concerns over a global recession kept the metal trading within a tight range on Friday (January 20), even as it closed out the week with a gain.

Supply disruptions in Peru due to protests could further push up copper prices. Las Bambas – the country’s third-largest largest copper mine, operated by Chinese state-owned miner MMG – hasn’t sent out any copper concentrate since January 3 as anti-government protesters have blocked traffic to and from the mine. Glencore’s Antapaccay mine, which together with Las Bambas accounts for nearly 2% of global copper output, shares the same highway access to ports, and has been operating at “restricted” capacity this week due to the protests and blockades.

More broadly, copper’s climb this week underscores the impact that China’s reopening is poised to have on commodity prices, with it on international supply chain pressures and inflationary trends. Much of the relief in those over recent months has been a function of minimal economic activity in China. Will that country’s return to normal prompt a new round of supply chain strains and sharp price increases? Or will its revived industrial capacity make up the gap? 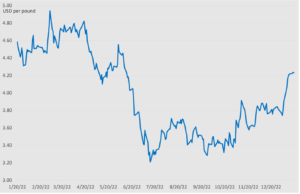 Bolivia has picked a consortium that includes Chinese battery giant CATL and Chinese miner CMOC to develop the country’s largely untapped Uyuni and Oruro salt flats. The deal will help CATL—which doesn’t currently produce lithium, having lost its bid in 2021 for the Canada-headquartered and Argentina-focused Millennial Lithium Corp.—stake out a key upstream node in the EV battery supply chain.

Europe rushes to Russian diesel, while it can

As the EU’s February 5 ban on Russian oil product imports inches closer, European traders are scrambling to stock up on Russian diesel, pushing flows for January toward a one-year high. The expanded embargo – compounded by looming sanctions that will put an additional price cap on Russian oil products – will rejig trade routes and heighten price volatility.

Europe, which has long relied on Russian diesel, will likely turn to China to meet its shortfall. And some of that Chinese diesel will itself be refined from Russian crude: Shipping data show at least four Chinese-owned supertankers carrying Urals crude headed for China. Meanwhile, soaring demand for oil storage tanks in Singapore suggests that Russian oil is getting mixed in the Southeast Asian country and re-exported globally.

Good for energy, bad for food

While Europe faces the prospect of a diesel shortfall of some half a million barrels, it can find some relief in the fact that it has made it through half of winter with natural gas inventories still at record highs. As of January 18, the bloc’s gas storage is still over 80% full, according to Gas Infrastructure Europe. In part this is thanks to mild weather, plus market-driven high prices that curbed demand from commercial and residential users. But there’s a downside to the mild weather: Lack of snowmelt, which is depleting water resources, and in turn curbing crop yields and pushing up food prices—another major driver of inflation.

As expected, China’s property crackdown and its ham-fisted zero-covid policies have dragged down the nation’s economy: 2022 was one of the country’s worst years of economic growth in nearly five decades. Official data published this week showed a 3% year-on-year growth in GDP in 2022—the lowest since 1976, excluding 2020’s 2.2% GDP growth. On a quarterly basis, the Chinese economy recorded 0% growth in the three months to December.

And while China stocks are on the cusp of a bull market in the run-up to the new Year of the Rabbit, that optimism belies the less rosy outlook the country faces as it stares down a chaotic and deadly unwinding of its pandemic policies, a fragile real estate sector, a worsening debt squeeze on local governments, and a population that shrank last year for the first time since the early 1960s. 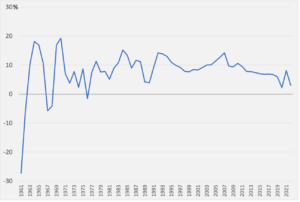 Britishvolt, the battery startup on which the UK had pinned its hopes to build a homegrown industry to support domestic EV makers, has gone belly up. The company failed to raise funds to build a major battery factory in northern England, and filed for administration this week.

The collapse of Britishvolt immediately halved Britain’s planned battery pipeline capacity set to come online by 2031, and deals a setback to the British auto industry that had been counting on UK-made batteries to avoid EU tariffs. It also leaves the UK’s battery capacity pipeline now entirely dependent on China’s energy company Envision, which is planning a 35 gigawatt hour plant in the city of Sunderland.

In other automotive news, French automaker Renault and China’s Geely Automobile are reportedly working on a joint venture deal with oil giant Saudi Aramco to develop low-emission and hybrid engines and transmissions. Another JV seems to be having less luck: General Motors and LG Energy Solution have scrapped plans to jointly develop a fourth US battery factory.

Japan’s core inflation, which excludes food and energy, hit a 41-year-high of 4% in December. That’s double Tokyo’s target of 2%. And while the Bank of Japan has insisted that the country still doesn’t have sustainable inflation to justify a rethink of its ultra-loose monetary policy, the fact that inflation has been above 2% for nine consecutive months is now piling pressure on the central bank to adjust its stance.

For now, the BOJ has continued to defend its yield curve control measures, including a surprise move last month to widen the trading band for the yield on its 10-year government bonds. But a growing chorus of commentators think that move has backfired, causing the yen to slump and forcing the central bank to make huge bond purchases.

Chinese mining companies have poured billions into nickel extraction, refining, and smelting operations in Indonesia. The Indonesian government is eager to attract more such investors to move up the critical minerals value chain.

But those investments, and the accompanying influx of Chinese workers, have also inflamed local tensions. Last week, violence broke out between Chinese and Indonesian workers at the facility of PT Gunbuster Nickel Industry, a subsidiary of China’s Jiangsu Delong Nickel Industry Co., leaving two dead. According to the local government of the Central Sulawesi region, tensions had begun rising in December after a fatal workplace accident. The incident points to the potential for further backlash against Chinese minerals investments in Indonesia and elsewhere, adding another source of volatility in the market for the lucrative metals.

Other global companies are also moving to set up nickel projects in Indonesia. This week, Indonesian officials said Germany’s chemicals giant BASF and French miner Eramet are finalizing a deal to jointly invest 2.6 billion USD to develop a facility to process battery-grade nickel and cobalt in the country. Meanwhile, Australia’s Nickel Industries—which has existing collaborations with China’s Tsingshan—said it’s raising 471 million USD to fund the purchase of nickel projects in Indonesia.