President Joe Biden this week announced the largest ever release of oil from the Strategic Petroleum Reserve, adding 180 million barrels to the market over the next six months. The unprecedented move comes amid surging oil prices, with Brent and WTI benchmarks up 38% and 34% respectively in the first quarter, driven by Russia’s invasion of Ukraine. But while US oil prices slumped 7% following Biden’s announcement, the SPR release does not directly address—and may even exacerbate—the structural supply deficit. It doesn’t create more oil. It risks also distorting the price signal that producers need actually to address that deficit; to increase investment and production capacity. And once the drawdown is complete, the SPR would be at its lowest level since 1984, giving the US less room to manoeuvre in the event of another supply shock. Domestic production—currently below the pre-pandemic peak—must therefore be ramped up. And, as some analysts note, it may be necessary to consider energy conservation measures. 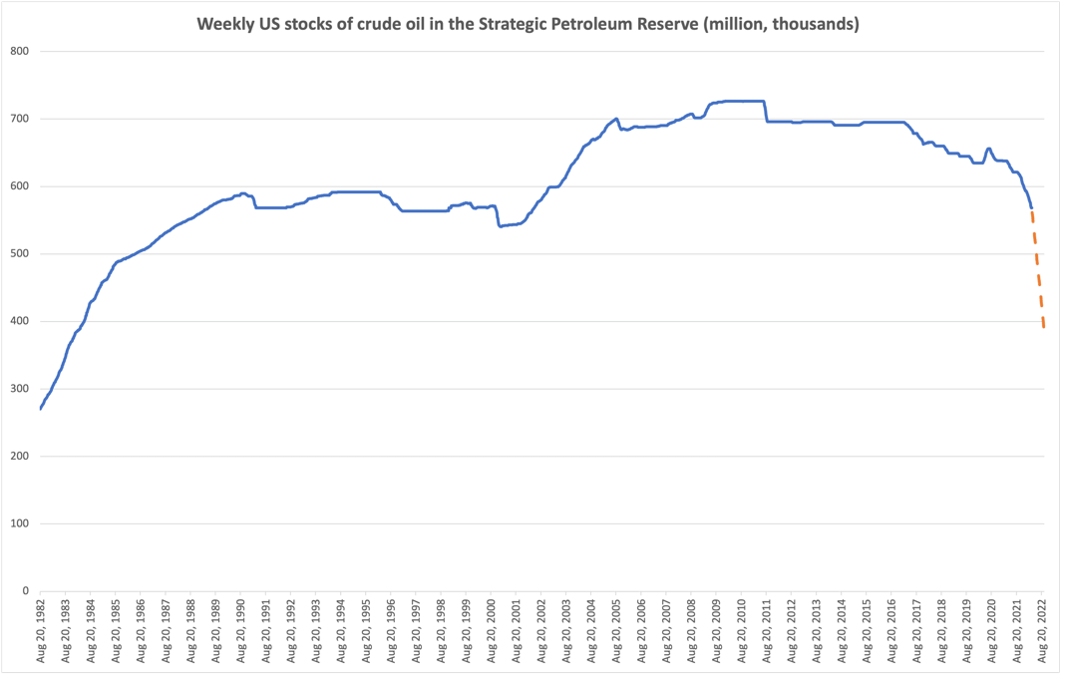 FACTORS: But on the other hand, the White House invokes the Defense Production Act for critical minerals

Biden has invoked the Defense Production Act to boost domestic production of strategic and critical minerals, authorizing tools like purchase commitments and financing for grants and loans to incentivize mining projects. This responds to a changing industrial landscape, as well as the dawning realization that supply chains matter — and those of the US are not secure. The transition to clean energy will drive exponential growth in demand for minerals like lithium, nickel, cobalt, graphite, and manganese, but the US is currently heavily dependent on what the White House calls “unreliable foreign sources” (read: China) for many of those raw materials.

Biden’s move indicates that Washington is willing to treat the question of US strategic industry capacity as a security, and defense, priority. And considering that the defense apparatus remains an enduring US strength, and a system that can get things done, this could augur a real change in Washington’s relationship with industry. The lingering question: How will the Biden administration internationalize this approach. US production on its own is insufficient. International resources and production are also critical; so is the security of allied value chains. Washington has to figure out how it is going to leverage strategic relationships with allies and partners like the EU, Australia, and Japan to coordinate production and supply chain resiliency – while blunting Chinese efforts to establish and cement dominance in key nodes of critical mineral supply chains.

FACTORS: Canada’s energy, food, and minerals put it on the big stage (for once)

Most days, it’s easy to forget that Canada exists. Not so right now, with a global resource squeeze emerging and Canada a rare source of supply. Canada was the world’s second largest producer of uranium in 2019, and the top producer of potash in 2020. With the Russia-Ukraine war disrupting supplies, countries are now looking to Canada to plug shortages and build up reserves. This development is another example of how the war is altering global trade flows of energy, minerals, and food. But Canada is not a silver bullet. Competition for its resources will be tight and the country faces supply challenges of its own. Take, for example, rapeseed oil: Canada is the world’s largest producer of rapeseed oil, accounting for 38% of global total, while Russia and Ukraine make up a combined 9%. But a drought in Canada last year significantly reduced rapeseed production; the US Department of Agriculture notes  that “increasing export volume prior to the 2022 harvest is a non-starter.” And that drought had effects beyond rapeseed oil, too: Canadian wheat was similarly impacted.

2022-09-26T12:43:14-04:00#Canada #critical minerals #Energy #Supply |
FacebookTwitterEmailPrint this page
Force Distance Times Dispatch
Subscribe to the Force Distance Times weekly newsletter to keep up to date on our latest commentary
We respect your privacy