A July 2022 poll sponsored by Force Distance Times found that the plurality of likely voters favor ending China’s Permanent Normal Trade Relations status (Most Favored Nation status), and 2-1 support among Republicans – all at the height of inflation. Addressing China’s PNTR status is a strategic opportunity in US-China competition. And American public will backs it. 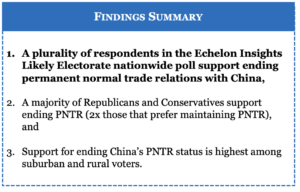 A more thorough summary of the poll results, methodology, and context can be found here.

Two decades ago, in 2000, the United States granted China Permanent Normal Trade Relations (PNTR) status, so that it could join the World Trade Organization. PNTR, previously called Most Favored Nation, status is a designation granted by the US as a part of free trade. The receiving nation is awarded all trade advantages that any other nation receives.

President Bill Clinton, who led the charge in China’s PNTR designation, promised that the move would make the United States richer, China freer, and the world more peaceful: “This deal is overwhelmingly in our favor.”

…The terms of the U.S.-PRC agreement will encourage reform in China. China will have to make its trade regime consistent with its WTO obligations. This will lead to a deepening of its market reforms; leaders who want their country to move further and faster toward economic freedom will be empowered…This process will also strengthen the rule of law in China.

– US Department of State: China WTO Accession and PNTR, May 2000

The opposite proved true. The PNTR designation facilitated outsourcing to and importing from China: Between 2000 and 2015, US manufacturing plummeted while China’s surged. China’s exports to the US more than tripled. 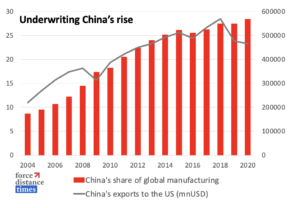 Meanwhile, Beijing consistently defied the obligations of not only its WTO membership but also PNTR status. Receiving governments must not restrict emigration of their people. But since 2000, the Chinese Communist Party has implemented a genocide within its borders, tightened control of its domestic economy, defied its obligations to the international market – and, at the same time, hollowed out US industry, growth, and opportunity. China’s authoritarian, non-market rise has been subsidized by free trade with the US. 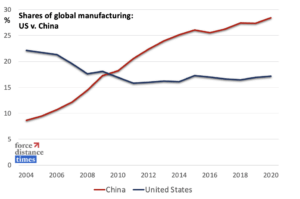 The US government has recognized the threat posed by the CCP – and the imperative of economic competition. But existing US tools of economic competition are inadequate to address the CCP threat: Constrained by unwieldy bureaucracies, political pathologies, and regulatory limitations, they permit, at best, a half-hearted “whack-a-mole” defense. Addressing China’s PNTR status could leapfrog these constraints, opening the door to  strategic action to reset the foundational structure of US-China economic relations. 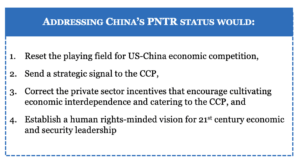 The precedent and bipartisan political will for such a move exist: After Russia’s invasion of Moscow, the US ended favorable trade status for Russia. This provides immediate precedent for addressing the PNTR status of China, Russia’s most powerful ally. Moreover, the past two years have seen bipartisan interest from Congress in revoking China’s PNTR status: The political will is there.

Anyone who takes an objective look at our trade policy with China must conclude that it is an absolute failure and needs to be fundamentally overhauled.

So is the public will: A July 2022 poll sponsored by Force Distance Times found that the plurality of likely voters favor ending China’s Most Favored Nations Status, and 2-1 support among Republicans – all at the height of inflation. American public will backs this strategic opportunity in US-China competition. 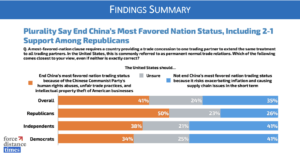 In short, addressing China’s PNTR status would open the door to effective, strategic competition with Beijing. Such action has political precedent and bipartisan support. It also has public support – even when its costs are made clear and at a time of economic upheaval.

A more thorough summary of the poll results, methodology, and context can be found here.

More information on Force Distance Times can be found here.

2022-10-17T08:35:03-04:00#China PNTR #Poll #public opinion |
FacebookTwitterEmailPrint this page
Force Distance Times Dispatch
Subscribe to the Force Distance Times weekly newsletter to keep up to date on our latest commentary
We respect your privacy