The US and China Are in a Space Race: Who Is Counting Laps?

The US and China Are in a Space Race: Who Is Counting Laps?
By Force Distance Times
November 3, 2022

On Monday October 31, the final module docked at China’s Tiangong space station, completing Beijing’s crewed orbital outpost. This development has intensified talk of a US-China space race – already well established in the zeitgeist since China’s lunar explorer landed on the “dark” side of the moon in 2019. The New York Times described the completion of the Tiangong space station as “the latest step in Beijing’s effort to surpass the United States in space exploration;” Chinese media echoed the point, trumpeting that “the Tiangong Space Station made China a major force in the space race.”

But what does the competitive balance in the US-China space race actually look like?

The two countries’ relative satellite capacity offers one piece of the story – and serves to illustrate their different approaches to the space race, as well as today’s larger industrial competition, and asymmetries that result.

As of August 2021, according to the UCS Satellite Database, the US owned or operated almost six times more satellites in orbit than China: 2,520 to 431. That quantitative advantage applies across types of orbit. The greatest advantages for the US lie in elliptical orbits as well as – thanks in part to SpaceX’s low earth orbit (LEO) satellites – LEO. 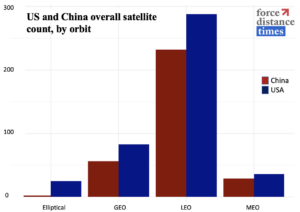 However, parsing that picture in more detail reveals asymmetries within the US and Chinese satellite ecosystems that could undermine the apparent US quantitative advantage – or at least the ability of the US to leverage it. US satellites predominately serve commercial uses and are largely owned, operated, and contracted by a fragmented collection of private sector actors. By contrast, not only do most of China’s satellites serve government or military purposes, but they are also owned, operated, and contracted by a far more consolidated set of players, largely part of or controlled by the Chinese government.

And many of those State-owned players have ties to the Chinese military apparatus. For example, almost 70 percent of China’s satellites are contracted to China Aerospace Science and Technology Corporation, a Chinese State-owned defense conglomerate that the US Department of Defense has identified as tied to the Chinese military. By contrast the three main contractors for US satellites account for less than 70 percent of the total. SpaceX tops the list with 57.22 percent, followed by Google-backed Planet Labs with about 7 percent. Both are private companies.

In other words, based on an overall count, the commercial space strength of the United States far exceeds China’s. However, the respective powers’ government and military arsenals sit at relative parity.

The centralization and government control that defines China’s satellite network likely grants Beijing outsized leverage over those. That in turn could allow Beijing to benefit more from its space network than can the US, despite quantitative American advantage. At the very least, China’s centralization constitutes a critical asymmetry in the US-China industrial competition – and one that US analysis, policy, and investment must acknowledge.