New strains hit Europe’s energy systems while the US fights to invest in next generation solutions, and struggles at the upstream. Plus, we have a breakthrough in nuclear fusion, hope that inflation might be easing (kind of), Japan’s new defense strategy, and a growing chip export curb alliance.

Falling temperatures and rising demand are adding strains to Europe’s energy systems. Earlier this week, France avoided outages by relying on a ramp up in supply from nuclear and hydro, as well as imports from nearby countries including Germany and Belgium. And while Europe has enough energy to make it through the year, the risk of shortfalls of as much as 30 billion cubic meters of natural gas will continue to loom over the continent into 2023, say the International Energy Agency and European Commission.

Complicating matters is the fact that Qatar, which Europe has turned to for LNG supplies to replace Russian gas, is now embroiled in a corruption probe rocking the European Parliament. The Parliament’s president, Roberta Metsola, has made it clear that the bloc would consider spurning Qatari energy as a result of the bribery scandal. “We are Europeans, we would rather be cold than bought,” she said this week. Germany, perhaps predictably, wants to maintain gas supplies from Qatar, saying energy and corruption are “two different things.”

Meanwhile, the EU this week again delayed a decision on a natural gas price cap. Member states are split: Those desperate for a cap say it would shield their economies from sky-high energy prices, while Germany, Austria, and the Netherlands fear that a cap could divert cargoes away from Europe, disrupting the bloc’s energy markets.

One piece of good news is that some countries have managed to curtail energy use. France, for example, cut its gas consumption by 10.5 percent year-on-year in the August to December period. But there’s a long way to go: According to the European Environmental Bureau, a network of citizens’ organizations, eight out of 27 EU member states haven’t introduced any measures to cut gas and electricity use in households, businesses, and public bodies.

Another incoming curveball: Switzerland’s cabinet is mulling curbs on electric vehicle usage in the event of energy crunches. Auto-schweiz, the country’s car importers lobby, this week warned that such a measure would only crimp EV sales and incentivize consumers to opt for internal combustion engine cars — further entrenching the country’s dependence on fossil fuels. 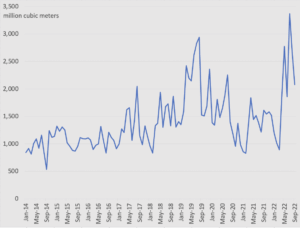 The US mining push struggles to break the tape…

The Biden administration is considering “around a dozen” mineral projects worldwide for potential federal financing, according to the US Under Secretary of State for Economic Growth, Energy, and the Environment. That would help build up the upstream segment of supply chains.

But the US needs mines at home, too — and right now, long permitting review processes are delaying investments. (Relatedly, the Senate this week rejected several proposed measures to speed up the permitting process for major energy projects.) Nor is this just a US problem. Canada is grappling with a similar issue, with the country’s mining minister pushing for less red tape so mines can become operational in less than a decade.

…But there’s progress at the midstream

Are oil prices about to surge?

Oil prices edged up about 2 USD a barrel earlier this week following a massive leak in the Keystone pipeline, where repair is ongoing and a restart date unclear. But prices slid again days later on a stronger dollar, and the hawkish notes struck by the US Fed, Bank of England, and the European Central Bank. The looming wildcard: Will China’s effective abandonment of its zero-Covid approach unleash pent up oil demand and send prices surging? And the International Energy Agency thinks 2023 could see an oil rally as Russia cuts output and demand beats expectations, leading to tightening global markets — and throwing a wrench in central banks’ attempts to tame inflation.

Meanwhile, the US Department of Energy announced on Friday that it will start buying back oil to refill the Strategic Petroleum Reserve in a pilot program that will see it purchasing 3 million barrels of domestically-produced oil. TBD if domestic producers take the bait.

Hope for a US inflation reprieve – by some measures

There is some good news on the inflation front this week: Consumer price gains continued to slow in November, with the CPI rising 7.1 percent year-on-year, down from 7.7 percent in October. Retail sales fell 0.6 percent, while manufacturing production also fell 0.6 percent.

But America’s inflation troubles aren’t quite over yet. For one, the labor market is still tight, with weekly jobless claims decreasing by 20,000 to 211,000. Another warning sign comes from the Cleveland Fed’s median CPI reading, which attempts to ignore volatile outliers without simply excluding food and energy. That figure has continued to rise, notching three consecutive months of 7 percent year-on-year increases through November. 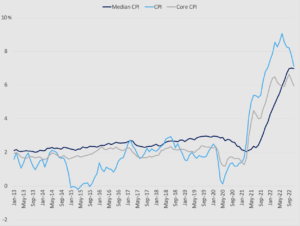 The Fed slows up, but keeps hiking

As widely expected, the US Fed raised interest rates by 0.5 percentage points on Wednesday, a step down from four consecutive 0.75 point increases. The central bank has left the door open to more increases next year: The latest statement anticipates that “ongoing increases…will be appropriate” to reduce inflation, while chairman Jerome Powell said there is still a “ways to go” in the inflation fight. Markets slumped on that hawkish note, with the S&P shaving off 2.5 percent, Nasdaq dropping 3.5 percent, and the Dow falling 2.2 percent on Thursday.

Over in the UK there are also tentative signs of inflationary pressures easing: The CPI dropped to 10.7 percent in November, the sharpest decline in 16 months. Still, prices of food and non-alcoholic drinks continued to climb, rising 16.5 percent year-on-year versus 16.4 percent in October. And service inflation has stubbornly held steady at an annual rate of 6.3 percent, while restaurant and hotels continued to see inflation climb – to 10.2 percent from 9.6 percent the previous month. The Bank of England raised rates by 0.5 percent and signaled the potential for “further forceful monetary policy response.”

Adding to the inflationary pressures is a series of nationwide strikes planned for every day through the end of the year involving health, energy, mail, railway, and civil service workers who are demanding better pay and conditions.

Japan, the Netherlands, and the US are teaming up to tighten controls of exports of advanced semiconductor machinery to China. The multilateral approach will make it harder for China to circumvent restrictions, though it will surely try.

Meanwhile, Beijing is busy lobbying South Korea to oppose the export curbs, and in the meantime has filed a formal complaint to the World Trade Organization challenging the Washington-led restrictions. And the Chinese government is reportedly readying a 1 trillion yuan (143 billion USD) support package for its domestic semiconductor sector. The money will not only go towards developing indigenous cutting-edge capabilities, but also ramping up production of older technology.

US scientists this week announced a breakthrough in fusion power: They got more energy out of the reaction than they put into it, achieving net energy gain for the first time — specifically, “about 2 megajoules in, about 3 megajoules out.” It’s a major scientific milestone in the pursuit of fusion energy, which smashes atoms together using lasers to produce energy.

But hold the wholesale excitement for now: Any practical, commercial possibility of using fusion to produce electricity for the power grid is still a long way off. According to Kim Budil, director of the Lawrence Livermore National Laboratory that achieved the breakthrough, a commercial reactor would require “many, many fusion ignition events per minute” to create a sustained energy source.

That said, while this week’s milestone doesn’t represent an immediate technological paradigm shift, it has already increased investors’ interest in the technology. Keep an eye on three US companies at the forefront of developing commercial fusion projects: Commonwealth Fusion Systems in Massachusetts, Helion Energy in Washington, and TAE Technologies in California.

Three new documents approved by the Japanese government this week sketch out the country’s revised approach to safeguarding its national security interests: No more self-defense only, and greater investment in offensive capabilities to counter threats.

The diagnosis in the documents is sobering: Japan is “in the midst of the most severe postwar security environment,” “some countries” are trying to increase their influence through economic coercion, and Tokyo must “prepare a firm foundation for the worst-case scenario.”

To that end, new policies laid out in the documents will see Japan raise defense spending to 2 percent of GDP (it has been capped at 1 percent since 1976), and acquire counterstrike capability on enemy missile launch sites. It will also deepen and expand its “multilayer network” of allies and partners, including the US, Australia, South Korea, India, and ASEAN nations.

2022-12-18T14:39:49-05:00#Energy #inflation #US-China competition |
FacebookTwitterEmailPrint this page
Force Distance Times Dispatch
Subscribe to the Force Distance Times weekly newsletter to keep up to date on our latest commentary
We respect your privacy