US inflation continues its run

US inflation figures climbed 1.3 percent in June to hit 9.1 percent year on year, driven in large part by energy and food prices – though core prices, which exclude food and fuel factors, climbed a whopping 5.6 percent as well. This, well exceeding expectations of 8.8 percent, is another record. It comes despite the Fed’s three successive rate hikes this year. It makes it all but certain that the Fed will raise rates by at least another 75, and perhaps even 100, basis points this month, stoking recession fears. All of this just days after the International Monetary Fund cut its growth projections for the US economy – projecting 2.3 not 2.9 percent growth for 2022 and 1 not 1.7 percent for 2023 – and raised its unemployment-rate estimates through 2025, warning of “systemic” inflation risks. 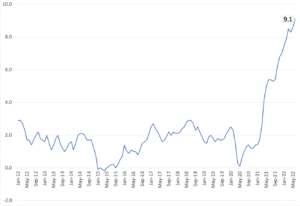 Optimists are still finding hope, pointing out that the recent drop in gasoline prices might dampen inflationary trends next month. But that’s a big if. It assumes that gasoline prices will continue to drop – despite, for example, OPEC’s just-released oil-market outlook for 2023, which suggests no relief for squeezed consumers. It also risks ignoring the non-trivial core prices jump. 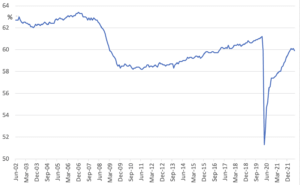 And, as we’ve noted before, those optimists, the larger conversation, and efforts to respond to soaring inflation, largely ignore the reality that today’s inflation is a supply-side problem: Supply disruptions, which rate hikes do not affect, are driving the bulk of inflation. The root causes of those disruptions (think: Russia’s invasion of Ukraine) have not been resolved – and alternatives have not been found. It doesn’t help that the employment-population ratio, which measures the share of working age people with a job in the US, is well below pre-Covid levels. That adds to supply-side constraints, limiting output and putting upward pressure on prices.

On a four-day Middle East trip this week, President Joe Biden’s stops were Israel, the West Bank, and Saudi Arabia; his agenda items Saudi-Israeli relations, Iran’s nuclear program, the war in Yemen, and, especially, oil supplies. The visit was not exactly a success: Biden failed to reach a deal with Saudi Arabia on oil production. Meanwhile, US narrative has broadly lambasted the president for even trying; for engaging, fist bumping, negotiating with Saudi Crown Prince Mohammed bin Salman (MBS), who approved the 2018 operation that killed Washington Post journalist Jamal Khashoggi – and whom Biden said while running for president he would make a “pariah” on the global stage.

The argument is that this visit was a mercenary abandon of moral responsibility, that Biden traded US values for (potential) oil production. The bigger takeaway is that morality in international affairs is only as strong as the autonomy, including resource autonomy, behind it. Just as Europe’s normative stance vis-à-vis Russia is caving to energy dependence, so too is Biden’s on Saudi Arabia. The process goes relative leverage then projection of values. A second takeaway: In an era of great power politics, morality is relative. The Biden administration framed the Middle East visit around maintaining a counter-presence to Russia and China (“We will not walk away and leave a vacuum to be filled by China, Russia, or Iran”). With a new contest for global leadership underway, the black and white morality of a unipolar world is an unaffordable luxury.

The US-based GlobalFoundries and Switzerland-based STMicroelectronics said this week that they will jointly build a 5.7 billion USD semiconductor factory in France, with significant state funding from Paris and possibly subsidies from the EU’s proposed Chips Act. The plant is expected to hit full capacity by 2026, and will focus on chips for automotive, communications, and industrial uses. The joint announcement follows Intel’s decision in March to invest 36 USD billion into building two chip factories in Germany, plus R&D and manufacturing facilities across Europe.

This is all part of the EU’s bid to ramp up its semiconductor sector and strengthen “digital sovereignty” by better insulating its industries from geopolitical risks. It comes in marked contrast to faltering US efforts on the same subject: With the major US semiconductor bill stalled in Congress, Intel has delayed next steps on its 20 billion USD facility in Ohio. That said, remember that semiconductor factories are energy intensive. If Europe is going to make good on its chip ambitions, it will need not only fabs but also a whole new energy infrastructure independent of Russian fuels.

Peloton is out on manufacturing…

Peloton announced this week that it will outsource all its own manufacturing and work primarily with Taiwan’s Rexon Industrial to produce bikes and treadmills. This comes some two years after the company announced it would build a 400 million USD factory in Ohio. Now, Peloton is abandoning its manufacturing ambitions and squarely positioning itself as a subscription business. The argument: Subscriptions bring in recurring revenue, manufacturing is expensive, and exercise equipment doesn’t demand hard-to-access raw materials that would make vertical integration key to controlling costs. The market seems to agree: It sent Peloton shares up 3.7 percent on the day of the announcement – though shares are still down over 90 percent over the past year.

At a time when ambitious narrative about re-investment in manufacturing is everywhere, this is a timely, and poignant, reminder that talk only means so much and old habits (in this case offshoring, and the market’s incentive to reward it) die hard.

…and apparently California is in

California governor Gavin Newsom announced last week that the state will invest 100 million USD into manufacturing its own insulin, under the generic label CalRx, to fight the drug’s high prices. The aim is for the state eventually to manufacture other generic drugs too, in order to slash costs and ensure stable supplies. How exactly California’s ambitious plan to get into the drug prescription business, and produce insulin at lower prices, will work remains to be seen. Manufacturing insulin requires specific expertise, and right now three multinationals control 96 percent of global supplies. Beyond technical know-how, California will also need to navigate a complex pharmaceutical distribution system of drug makers, middleman companies, and insurers.

France, and Europe, brace for the gas taps to be turned off

On July 10, French finance minister Bruno Le Maire warned that Europe must prepare for Russia to shut off gas deliveries to the region entirely in retaliation for sanctions on the Kremlin. Le Maire called this the “most likely scenario.” He also promised that the French government is “trying to do everything that is required to avoid” energy shortages, including building up stockpiles, reducing red tape, curtailing usage, and switching fuel sources – for example, the country’s most energy-intensive companies are taking steps to switch to oil. Le Maire also promised that France was accelerating its investment in new nuclear reactors, a positive spin on the reality that, in a country that relies on nuclear power for 37 percent of its energy needs, half of the debt-laden utility EDF’s 56 nuclear reactors are currently shut for inspections and repairs. The French state, which already owns 84 percent of EDF, now plans to fully nationalize the utility.

As that nuclear case drives home, no matter what measures are being taken, neither France nor the rest of the EU is ready. The region remains dependent on Russian gas, a reality of which Moscow is well aware. This dependence will only be more extreme when winter hits. If Le Maire is right that this Russia is about to shut off gas deliveries, Europe may be on the verge of shut down.

The Chinese lithium rush is such that there are some unusual characters in the mix. In recent months, a Chinese cement maker, real estate company, latex gloves manufacturer, and a medical services firm have all separately made investments in lithium firms and projects. They may not all be poised to benefit from these investments – the state-run Securities Daily has warned against companies “flocking blindly to follow the herd” – but China’s control over global lithium supply likely will.

…and could go back to buying Australian coal

Bloomberg reports this week that China is considering lifting its unofficial, nearly two-year ban on imports of Australian coal. The proposal comes amid concerns China will face increased competition in procuring coal from its main suppliers, including Indonesia, as Europe turns away from Russian fuels. Beijing is mum about the ban’s possible lifting, saying only that it “hopes Australia will grasp the opportunity” for better relations between the two countries. 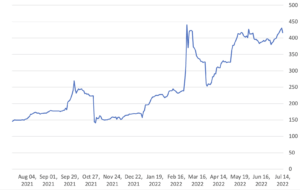 With the global economy in flux, politics are rapidly following suit, in turn, of course, compounding the economic situation in a dangerously reinforcing cycle. Chaos across emerging economies – driven by soaring inflation and rising default risks – continues. Last week saw protestors in Sri Lanka unseat their president; this week, nationwide anti-government protests in Panama escalated, blocking highways and ports despite government commitments to freeze the price of gasoline and basic goods. Albania, Argentina, Kenya, and Ghana are all seeing similar movements, and cash-strapped governments struggling to respond. (Argentina is bracing for 90 percent inflation after the Economy Minister unexpectedly quit.)

But this problem is not confined to emerging economies. The political systems of the developed world are beginning to falter under the weight of today’s economic turmoil, as well. In Rome, this week, the Italian prime minister tendered his resignation after losing a critical coalition partner – which accused him of not doing enough to tackle the cost-of-living crisis. The president has refused the resignation, the prime minister has less than a week to reach a compromise, and ripple effects are all but assured across the Eurozone should things go south.

Is the Texas power grid doomed to fail?

Searing heat in Texas this week threatened to overload the state’s power grid, with an overall demand strain compounded by low winds in the weather system, which left wind turbines operating at just 8 percent of their potential output. Pleas from the grid operator for households and businesses to conserve energy helped to avert rolling blackouts. (Though not for industrial scale Bitcoin miners in the state, which had to shut off their machines to conserve energy.) This case itself was hardly a game changer. But the trend it’s part of might be. Texas is an energy island: Its power grid is mostly disconnected from the rest of the country. This makes the grid less resilient because Texas can’t borrow energy from other states when its infrastructure fails – remember Winter Storm Uri, which knocked power out across the state in Winter 2021. And with weather trends increasingly volatile, resilience is key. What happens when the next heat wave lasts a few days longer? Or as demand from industry moving to the state grows? And what happens to that industry if there is a large-scale failure?

2022-07-17T20:04:39-04:00#coal #Europe #inflation #lithium |
FacebookTwitterEmailPrint this page
Force Distance Times Dispatch
Subscribe to the Force Distance Times weekly newsletter to keep up to date on our latest commentary
We respect your privacy