Europe scrambles to keep ahead of energy crisis

Europe is facing down what could be the greatest energy crisis in its history. The EU has not imposed an embargo on Russian gas, as it has on oil, because it is simply too dependent to impose an embargo (to the tune of 40 percent of consumption). However, Russia is weaponizing this dependence. For months before its invasion of Ukraine, Moscow kept gas supply intentionally low to drain reserves. Over recent weeks, Russia has cut gas flows to Germany via the Nord Stream 1 pipeline by 60 percent, citing what appears to be a fictitious maintenance issue – and is more likely retaliation for western sanctions. Now, Nord Stream flows have been restored. But only partially, and European leaders are warning that longer supply curbs or a total shut-off are still very much possible. After all, Russia has  has a trump card in its conflict with the West: Why not play it? Moreover, even an operating Nord Stream does little to address the reality that winter is coming, and Europe’s gas reserves are depleted.

The EU and member states are desperately trying to patch together a more diversified portfolio of gas sources: Italy has signed a major energy deal with Algeria for another four billion cubic meters of natural gas exports, on top of an additional nine billion cubic meters agreed upon in April; the EU just notched a deal with Azerbaijan to double imports of the fuel by 2027. However, 2027 is years away. Europe faces an immediate energy shortage. Developing new supply is a long-term project. The only short-term answer is to reduce demand. The EU executive branch said on Wednesday that member states would have to cut natural gas use by 15 percent from now until next spring. That will be a squeeze for European production and European consumers. It will shrink an already contracting economy – and impose political costs as Ukraine fatigue and cold weather kick in.

And it’s not exactly smooth sailing until winter: Record temperatures across the continent this week have intensified the disruption of the energy crunch. Reliance on ACs is exacerbating the energy shortage. Businesses and schools have shut, trains and flights have been canceled, and wildfires and droughts are destroying crops and crimping yields. Then there’s the shear human cost: At least 1,700 have died from the heat in Spain and Portugal alone. Plus, the River Rhine is drying up. The water level could drop so much that it becomes too shallow for barges carrying commodities like coal and oil to sail through — which is exactly what supply chains need.

More trouble in the Euro zone

Energy is just one half of the crisis facing Europe. The EU is also grappling with rising inflation – compounded by and compounding the energy challenge – that threatens to expose the bloc’s fault lines. Struggling to tamp record inflation, the European Central Bank raised its benchmark deposit rate by 50 basis points on Thursday, ending an era of negative interest rates.

This move poses particular challenges for the economically diverse, to put it politely, bloc: Higher interest rates mean higher borrowing costs, which will hit the eurozone’s big debtor nations. For example, Italy, the EU’s second most indebted country after Greece, now faces a bond selloff just as its coalition government has collapsed. Plus: New data on Friday suggested that Europe might be on the brink of recession. Weary of pushing its weakest member states over the edge, the ECB has unveiled a bond purchase program designed to prevent borrowing costs across countries from diverging too much. Whether this intervention will work, or backfire by distorting markets, is just another uncertainty hanging over Europe as it deals with political turmoil, higher borrowing costs, an energy crisis, and a war on its doorstep. 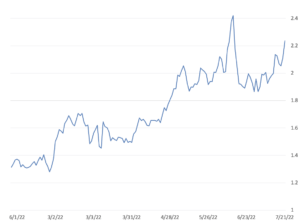 A movement to boycott mortgage payments has spread to nearly 100 cities across China in recent days, as angry buyers protest construction delays in already-purchased homes. Estimates vary on the total amount of at-risk mortgages, but most analysts put the figure between 150 billion and 370 billion USD, out of 5.7 trillion USD of total mortgages on Chinese financial institutions’ balance sheets as of March.

This risk here is that the mortgage debacle could have cascading effects. Chinese banks may have more nonperforming loans than they realize. Developers may quickly encounter cash flow problems if mortgage payments and pre-sale revenues dry up, in turn forcing them to default on loans, bonds, and other obligations. But the Chinese government is also adept at stabilizing situations, and authorities are in damage control mode: Regulators have urged banks to meet the financing needs of developers, and are reportedly considering giving homeowners a grace period on mortgage payments.

On a trip to Asia this week, US Treasury secretary Janet Yellen made her pitch for closer US-South Korea trade to counter China’s unfair trade practices. This comes on the heels of South Korean firms announcing a string of major investments in the US: Battery maker LG Energy Solutions intends to invest in a 1.4 billion USD battery factory in Arizona (though inflation may upend those plans), while LG Chem will invest over 11 billion USD through 2025 in its EV and battery materials business in the US.  The big question underlying these agreements is how much they actually provide counterweights to China’s trade clout – considering Korean manufacturers’ heavy exposure to China.

Stellantis pulls back on its China JVs…

Stellantis has called it quits on its loss-making joint venture with China’s state-owned Guangzhou Automobile Group (GAC), after the Amsterdam-headquartered automaker’s attempts increase its share in the partnership were stymied by its Chinese counterparts. With the JV’s termination, Stellantis is shutting down the only Jeep plant in China, opting instead for an “asset-light” strategy of importing the vehicles for sale. The decision comes just days after Stellantis announced it would be parting ways with a separate Chinese JV partner, Dongfeng Motor: On Monday, the two companies agreed on a share repurchase framework that will allow Dongfeng Motor to fully exit the JV.

These back-to-back reversals reflect some of the difficulties that foreign carmakers are facing in China, especially as the country’s domestic, government-supported players become more competitive internationally. But for all the hazards ahead, it doesn’t seem as if other incumbent international auto players expect to pull off the road for real any time soon: For example, at the end of June, BMW opened a new electric car plant in China; this year it also increased its stake in its Chinese joint-venture to 75 percent.

…While Ford’s EV supply chain brings it closer to China

And the dawn of the EV revolution seems likely to bolster China’s place in the international automotive sector. Ford this week announced a flurry of supply deals as it accelerates its EV push – including a major one with Chinese battery maker CATL for lithium-iron phosphate (LFP) battery packs. The two firms will explore further cooperation on battery supplies for Ford’s markets China, Europe, and North America.

Ford has also announced a series of battery raw materials sourcing deals, including non-binding agreements with Rio Tinto for lithium, and BHP and Huayou for nickel. Ford is developing EV battery chain partnerships in the US: too On July 21, it announced a binding offtake deal for lithium from a mine in Nevada. All told, Ford says it has secured 70 percent of the battery capacity necessary for its planned production capacity of two million EVs by 2026.

Russian fertilizer gets a pass, with a little help from inflation

In a surprise decision, the US International Trade Commission ruled this week that it wouldn’t impose tariffs on Russian and Trinidadian imports of urea ammonium nitrate. The panel concluded that imports of the liquid solution, used to make fertilizer, did not hurt American producers. This despite the Department of Commerce finding last month that Russian and Trinidadian imports of the fertilizer inputs were being subsidized and dumped. Inflation might have had something to do with the decision: Fertilizer prices more than doubled last year, and rose further still following Russia’s invasion of Ukraine. Farm groups, including the National Corn Growers Association, cheered the USITC’s decision. Domestic fertilizer companies aren’t celebrating. 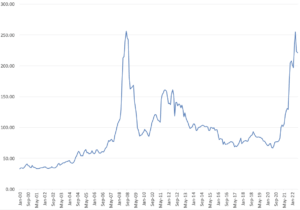 This offers a neat complement to rumors that the Biden administration will relax tariffs on China in an effort to tamp down inflation; taken together, the two suggest that normative US economic and geopolitical stances are faltering in the face of a tumultuous economic environment. Do spoilers like Russia and China recognize the opportunity that this period of crisis lends them? Will they seize on it to rewrite the geo-economic architecture – more than they already have?

There’s a new kid on the block: China Mineral Resources Group (CMRG). Beijing has established the new state-owned iron ore company to consolidate China’s foreign mine investments and oversee raw materials procurement; CMRG will include within its scope major Chinese companies like China Baowu Steel Group, Ansteel, China Minmetals, and Shougang Group. This constitutes the latest step in Beijing’s bid not only for greater self-reliance in primary inputs and energy supplies but also to consolidate its position, and therefore influence, in them. Beijing hopes that this new, centralized entity will grant it more pricing power in international markets and help it better control the costs of steelmaking inputs, for which it is highly import dependent. This could strengthen Beijing’s hand, and shore up its weaknesses, as it invests in massive infrastructure spending to drive economic growth.

As inflation, rising central bank rates, and supply shortages continue to wreak havoc across the developing world, Tunisia teeters on the democratic brink. The President, Kais Saied, has just released a new draft constitution that assigns him sweeping powers – and undermines those of the Parliament and judiciary. The draft will go to national referendum on July 25. his is just the latest in, and could cement, an ongoing democratic crisis in Tunisia, the only democracy that made it through the 2011 Arab Spring protests intact: About a year ago, Mr. Saied suspended Parliament and fired the prime minister; since, in a claimed bid to eradicate corruption and reform the government, he has consolidated power – all while the country’s economy teeters under the one-two punch of pandemic and rising food prices, and seeks a bailout package from the IMF.

Monkeypox is a global health emergency

The World Health Organization has declared Monkeypox a global emergency. The virus has spread to over 70 countries; there are nearly 3,000 cases in the United States and 16,000 outside Africa, roughly five times the number a month ago. The WHO’s designation will open the door to greater investment in understanding and treating the disease – about which information remains scarce. It could also exacerbate the vaccine shortage.  With this decision, Monkeypox becomes the second non-Ebola disease that the WHO has declared a global health emergency in as many years, after COVID-19.

Stay tuned for US gross domestic figures, scheduled to be released on Thursday. These could show a second consecutive quarter of contraction, which would meet the textbook definition of recession.

2022-09-26T12:27:54-04:00#Energy #EU #EVs #Monkeypox #Tunisia |
FacebookTwitterEmailPrint this page
Force Distance Times Dispatch
Subscribe to the Force Distance Times weekly newsletter to keep up to date on our latest commentary
We respect your privacy