With the energy crisis here to stay, the White House is throwing Econ 100 to the winds; Europe on a quest for new supply; and China sitting pretty atop cheap Russian imports that promise new energy influence, and leverage over the West. Meanwhile we round out the week with economic collapse in Sri Lanka, a COVID pill in China, and a looming critical mineral shortage.

THE BIG SCREW UP

US president Joe Biden made a desperate plea to Congress this week for a three-month federal gas tax holiday, while also calling on state governments to follow suit. Biden promises that the effort will provide “immediate relief” from soaring fuel prices. But in reality, a tax holiday risks only exacerbating today’s energy squeeze – and without offering any real reprieve at the pump (a mere 18 and 24 cents per gallon of gasoline and diesel, respectively, with prices for both at some two times their 2020 figures).

Today’s record-breaking gas prices are a function of a supply shortage. A tax suspension does nothing to address that shortage. On the contrary: Any price relief this offers will only fuel demand, thus further straining already-limited supply. An effective policy would have to dampen demand, not encourage it – and more importantly, increase supply. Adding insult to injury, remember that federal gas tax dollars go to critically needed infrastructure investment. This is Econ 101. Washington, in its desperation, is getting it wrong. 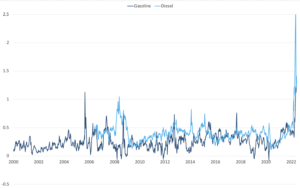 Europe prepares for a harsh winter

Meanwhile, Europe’s energy quandary puts that of the US to shame. Germany has declared a gas emergency in response Russian supply cuts. Other European countries including Italy, Austria, and the Netherlands are facing a gas crunch, too. That’s forcing them to turn to coal – and sparking worries of backsliding on dirty fossil fuels. It’s also prompting European players to launch a new generation of non-Russian, gas supply deals. Germany this week signed its first ever binding long-term deals with US LNG supplier Venture Global. And Qatar, currently the world’s top LNG exporter, is suddenly on everyone’s A-list: Last week, it signed up Italian energy company Eni as its second international joint venture partner, after France’s TotalEnergies, to join its 30 billion dollar program to develop the giant North Field East gas project.

But European companies aren’t the only ones betting on Qatar: Reuters reported last week that CNPC and Sinopec, both State-owned Chinese companies, are in advanced talks to invest in the North Field East project and to secure long-term supply deals.

And China sits pretty on an energy bonanza

Speaking of China: While the West struggles to face down the energy squeeze imposed by Russia’s invasion of Ukraine – and  US crude processing goes full throttle trying to keep pace – China is enjoying the exact opposite dynamic, and building up international leverage as a result. China and India are continuing to buy Russian crude, and at rock bottom prices. Amid this relative energy bonanza, China is letting roughly one-third of its oil refining capacity sit idle.

The result? In the immediate term, Beijing enjoys energy security, with it greater economic security, at a time of chaos in the West. Beijing is also exacerbating that chaos. In serving as a financier for Russia, China is enabling Moscow’s offensive in Ukraine, and therefore risks prolonging the West’s energy squeeze. And China is doing all of this without lubricating international markets with its own energy production. Looking forward, Beijing may be positioning itself to serve as the arbiter of the future international energy economy and to claim all the influence that might result.

It seems that supply shortages will characterize the next generation energy transition, too. It’s not only US oil companies that are adhering to a strict regimen of capital discipline at a time of soaring prices. Metals companies are showing similar restraint. Though prices of key metals like nickel, iron ore, copper, and zinc have climbed, mining companies aren’t spending extra to dig up more ores. Like the oil firms, big miners are instead opting to for dividends and share buybacks amid investor pressure. This will exacerbate the projected global shortfall as the energy transition drives up demand for the metals.

There are also wildcards at play here, with ramifications for immediate supply: Gecamines and China Molybdenum are currently locked in a 7.6 billion USD dispute over overdue payments on the Tenke Fungurume mine, one of the largest copper and cobalt mines in the world. This could disrupt exports of essential battery materials – and the mine’s future operations.

The US economy has too few tools – and too much hope

Testifying before the Senate Banking Committee, the US Federal Reserve chair confirmed what many already knew: the Fed’s blunt instrument of interest rate adjustments won’t bring down food and gas prices – and rate hikes intended to tamp down inflation mean a recession is “certainly a possibility.” Put another way, the Fed has limited tools to fight inflation and none quite suited to today’s dynamic, yet the Fed has been tasked with tackling the problem all but single-handedly.

That’s not ideal. It’s even less so because economic reports have of late followed a worrying trend of falling short of expectations, suggesting that the challenges facing the US economic system might be worse than any are acknowledging. Last Friday’s report on industrial production showed factory output declining 0.1 percent in May, despite a forecast of 0.4 percent growth. Figures released the day before put housing starts down 14.4 percent in May vice an expected 0.2 percent decline. Then, of course, there were the overall inflation figures for May, with rates up 9.6 percent year-over-year, compared to an expected 8.2 percent.

This news has flown under the radar in English-language press. But it could be a game-changer. It could allow China to chart an exit from its current COVID zero limbo, while averting the massive outbreaks, deaths, and an epidemic of long COVID that many other countries are experiencing. This would constitute both a strategic and a PR win for Beijing. It also constitutes an unforced error for the US: VV116 is actually built on US pharma giant Gilead’s GS-441524 antiviral drug, just slightly modified to evade Gilead’s patent. Yet Gilead refused to push GS-441524 to clinical trials, opting instead for Remdesivir, which has proven less effective and accessible. Now Gilead is scrambling to make its own oral covid antiviral, but has lost its head start to a much smaller Chinese competitor armed with Gilead’s own technology.

One in four European firms are considering quitting China. But will they?

An April survey by the Europe Chamber of Commerce in China shows that 23 percent of business respondents are considering shifting investments out of China, more than double the 11 percent recorded in a February survey conducted just before Shanghai’s massive weeks-long lockdown. But movements in the automotive industry suggest that the odds of such a significant exit from China actually materializing remain slim. BMW this year increased its stake in its Chinese joint-venture to 75 percent; Stellantis says it plans to do the same. BMW and Volkswagen are both investing in new EV production facilities in China. And the latter is sticking to its China guns despite accusations that its presence in the Xinjiang region is abetting the Chinese government’s campaign of human rights atrocities there.

All of which is to say that yes, some European firms may well leave China. But where big bucks are at stake – like the auto sector – don’t expect firms to be at the vanguard of decoupling. 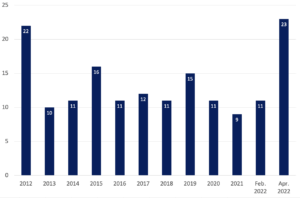 The war in Ukraine crushed Sri Lanka’s economic fortunes. The island nation’s prime minister said this week that its economy faced complete collapse amid double-digit inflation, fuel and food shortages, and power blackouts. Sri Lanka defaulted for the first time since 1948 last month, has depleted its foreign exchange reserves, and is in desperate negotiations with the International Monetary Fund to secure financial assistance. The turmoil in Sri Lanka hints at the potential of economic crisis bubbling over in the rest of the developing world as the US raises interest rates, global growth slows, and supply of critical resources dwindles.