FACTORS: Global helium shortage points to the cascade of chaos to come

A compounding set of disruptions to global helium production is creating a major shortage – with ripple effects across industries. First, there was the mid-January shutdown at a major US helium enrichment plant, responsible for producing some 14.2 million cubic meters per year, or about 20 percent of the US total. To that add the one-two punch of fire followed by explosion at a new Russian helium plant, just put on line this year, that was expected to produce some 49 million cubic meters annually. On top of that, Qatar has closed two of its helium-producing LNG plants for scheduled maintenance. And then, of course, Russia invaded Ukraine. At a first order, Russia is a major helium producer; war could threaten that production, and sanctions imposed by the West could threaten international access to it. But there are second order implications for the helium industry, too: Most helium is produced as a byproduct of natural gas liquification. And as natural gas producers, namely in Algeria, re-route their supplies to Europe, they are doing so via pipeline rather than by ship, a process that makes the separating out of helium impractical. In other words, supply shifts in natural gas are creating supply shortage in LNG. Or, in a different set of other words, the helium industry can’t seem to catch a break.

Already, four of the five major helium suppliers have declared force majeure. They are rationing their customers to 45-60 percent of contracted amounts. And those are the lucky ones: Players who don’t have major contracts and buy helium on the spot market risk being plain out of luck. All of this matters. Helium is critical for everything from weather balloons to MRI machines, production of semiconductors to nuclear magnetic resonance. This shortage could therefore undermine weather forecasts at a time of unpredictable weather events; production of semiconductors at a time when those are already in short supply. This shortage could also be resolved, ASAP, as facilities go back online. But regardless, the helium debacle underlines the extent of second, third, nth degree effects that come of supply disruptions: Consider this a bellwether of chaos. 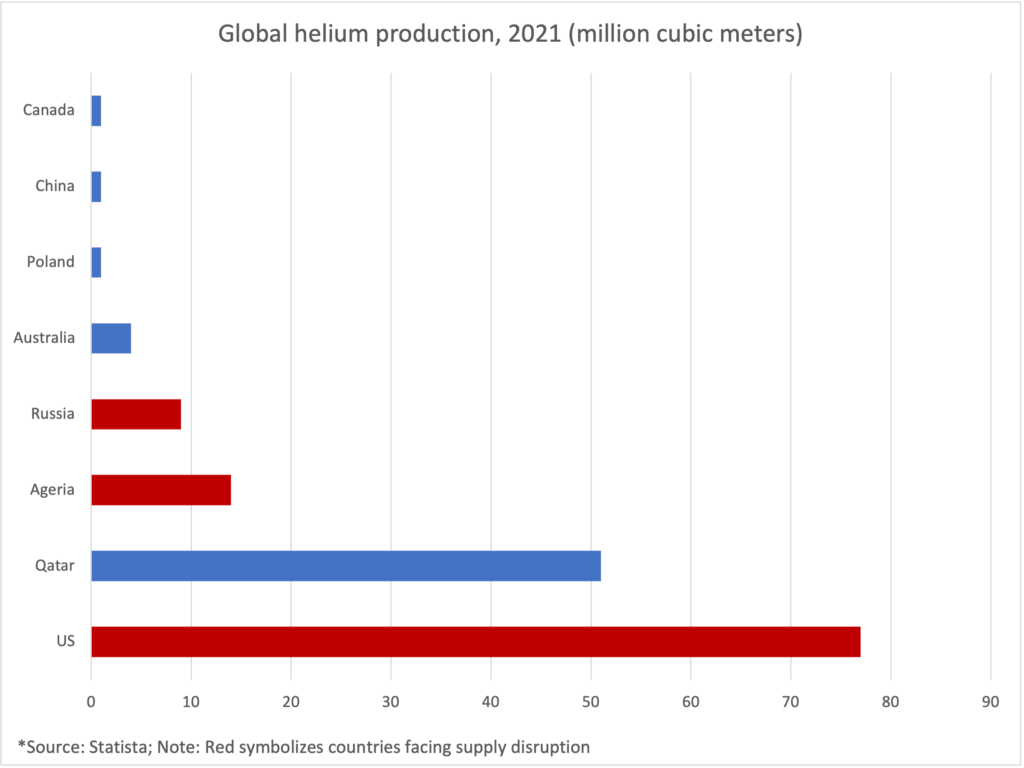 The European Union this week agreed to ban Russian coal as part of its latest round of sanctions against Moscow. The ban is expected to take effect in mid-August, after Germany pushed to delay it by a month. Though EU expenditure on Russian coal is a fraction of what the bloc spends on Russian oil and gas—just €8 billion per year for coal out of €99 billion spent on total energy imports from Russia —Russia-Europe coal trade is still the fifth-largest bilateral coal flow globally, according to BP data. That means there will be a significant reshuffling of trade flows, not unlike what happened when China banned Australian coal in late 2020. Europe will seek alternatives to Russian coal from Colombia, South Africa, Indonesia, and Australia. That in turn will create tighter competition for Asian buyers in those markets, who may find themselves scrambling for new sources. And it remains to be seen whether China and India will snap up Russian coal.

Overall: Prices will likely rise as coal supplies are re-routed on much longer journeys. This will affect poorer countries in particular – the same ones also hit hardest by higher food prices. Already in Peru, this is sparking protects and unrest. And the real squeeze hasn’t even hit yet.

FACTORS: China regains control of a major cobalt mine in the DRC

A roadblock in China’s global race for cobalt seems, for now, to have been cleared. It was reported this week that China Molybdenum (CMOC) has regained control of its 80 percent-owned Tenke Fungurume copper and cobalt mine in the Democratic Republic of Congo, which last year produced 18,500 tons of cobalt—more than 10% of the 170,000 tons produced worldwide. CMOC had been suspended from managing the mine in late February for refusing to divulge information on the size of the mine’s reserves. But now, Congolese state owned Gecamines has dropped its case against CMOC as the two sides try to settle a dispute over royalty payments.

This development puts China now back in control of an important source of cobalt, a key input for most EVs’ cobalt-based lithium-ion batteries. The case also serves to refute arguments that China’s corruption and opacity threaten, in any real way, its efforts to buy up global critical resource supplies.