Markets Briefing: Week of May 2

Prices, everywhere, are skyrocketing and Washington is struggling to respond. On Wednesday, the Federal Reserve increased its benchmark interest rate by half a percentage point. Though absolutely in line with expectations, this move defied recent trends: It constituted the Fed’s largest interest rate hike in two decades – an aggressive step to fight inflation rates not seen in four decades. And the Fed is signaling that it will continue to raise rates over the coming months.

Meanwhile, as the Fed tries to calm the problem, the Biden Administration is trying to weather it. With “I did that” Biden decals cropping up on gas pumps across the country, the Administration is wising up to the reality that sticker shock at the grocery store risks translating to frustration in the voting booth: A CNN poll last week found that 8 out of 10 Americans think Washington is not doing enough to address inflation, and that Biden’s policies are making it worse. Now, the Administration is trying to figure out what it can do. And the answer appears to be a heavy dose of speeches – dotted with discussion of easing tariffs on goods from China. The latter seems decidedly ill-advised; the former decidedly insufficient to save cratering approval ratings.

As the Stock Market Crumbles, the Real Economy Proves Its Value

One day after the Federal Reserve’s move, the market balked: On Thursday, the Dow and Nasdaq logged their worst single-day drops since 2020 and the start of the COVID pandemic. Tech – and, especially, e-commerce – were hit particularly hard, with Amazon and Shopify ending the week down 7.7 and 11.6 percent, respectively. Overall, some 40 percent of companies in the Nasdaq Composite Index closed the week with their values cut in half from their 52-week highs. The reasons for the plummet are relatively straightforward, or as much so as reasons can be a time of undiluted chaos: The Federal Reserve is tightening its policy in an effort to slow the over-heated economy, and markets do not know how to respond. On top of that are the inflation to which the Fed is responding, continuing lockdowns in China, and spiking resource shortages compounded by Russia’s invasion of Ukraine.

But there is a less obvious, and perhaps less well recognized, wrinkle: The companies seeing the greatest hits are those that are most virtualized; tech companies, for example, and, within that set, those like Netflix, Roku, and Spotify whose business models are most divorced from actual production. By contrast, tech companies like Microsoft, IBM, and Apple that make and sell physical products are faring better, relatively at least. And the US Commodity Index Fund (USCI), just about broke even for the week, and sits up more than 3 percent for the month. This may simply be a function of the current resource crisis and who bears it most. But it could also signal that the market is adjusting for its tendency to over-value the virtual at the expense of the physical.

The US is reportedly considering imposing sanctions on Hikvision, the Chinese surveillance camera company whose technology has been linked to Beijing’s brutal and repressive campaign against Uyghurs in Xinjiang. Hikvision is already under multiple US restrictions, including: The Department of Commerce’s entity list, which bars Hikvision from importing US products without a license; the Section 889 blacklist, which bars the federal government and government contractors from using Hikvision products; and the Non-Specially Designated Nationals Chinese Military-Industrial Complex List (Non-SDN CMIC), which bars American investment in Hikvision.

The sanctions currently being debate would go far beyond existing restrictions. If Hikvision were placed on the Treasury’s SDN list, it would ban US companies and individuals from transacting with Hikvision and freeze the company’s assets in the US. The threat of secondary sanctions is such that non-US companies and banks would likely be loath to transact with Hikvision, too. Effectively, Hikvision would be unable meaningfully to operate in the international market.

Amid an ongoing, now long-term industrial tit-for-tat between the US and China, this would be a marked escalation. Should the US follow through, Beijing is unlikely to take it lightly: Hikvision could be the straw that shuts down US tech companies’ manufacturing facilities in China (a move that could easily be obfuscated with the Covid Zero justification). Or this could bring to the so-called tech war the sort of mutually exclusive regulatory regimes that increasingly define the two countries’ approaches to human rights abuses in Xinjiang, and that are forcing companies to pick sides.

The US Doubles Down on Its Battery Supply Chain…

The US Department of Energy this week announced an additional 3.16 billion USD of investment to boost domestic EV battery manufacturing, as part of President Biden’s Bipartisan Infrastructure Law – which directs more than $7 billion to strengthen the U.S. battery supply chain. Of the 3.16 billion USD (see pp. 44-45), 1.5 billion will go to material processing, 1.45 billion will be allocated to manufacturing battery cells and their components, and 150 million will be devoted to recycling and end-of-life infrastructure.

The emphasis on material processing over the more downstream segments of the value chain is a promising indicator of attention to core inputs into the EV batteries – one of the key vulnerabilities in extant US capabilities. At the same time, there remains an upstream step not being acknowledged in this allocation: Where is the funding for investment in the unprocessed materials themselves?

…And So Does Porsche

The German sportscar maker is pushing further into EVs, investing 100 million USD into US lithium-silicon battery developer Group14 Technologies as part of a 400 million USD funding round. Group14’s flagship product is a silicon-carbon powder that can be added to, or replace, graphite anodes, which the company says will boost energy density. The investment will fund a third production facility (Group14 opened a factory in Washington last April, and a joint venture facility, expected to come online this year, in South Korea in partnership with SK Materials). Together with the 100 million USD dedicated to silicon anode materials as part of the Department of Energy’s 3 billion USD funding announcement this week (discussed above), this has been quite the week for the US silicon anode sector. But much more remains to be done: as of 2019, the US accounts for only 10 percent of global anode manufacturing capacity compared to China’s 65 percent, according to BloombergNEF (p.112). And don’t think too hard about where the materials for those anodes come from. 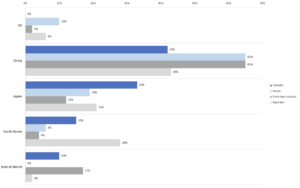