Markets Briefing: Week of May 9

Inflation Storms Ahead – and Where It Hurts the Most

US inflation figures for April are in, and they’re not great: The overall price index has risen 8.3 percent since last year. And while this is a slight drop from the 8.5 percent in March, it is still a) astronomical b) higher than the projected 8.1 percent and c) at a decades-high with few signs of easing. The energy index is up 30.3 percent over the last year, and that for food 9.4 percent. The biggest increases were in shelter, food, airline fares, and new vehicles. In other words, the areas feeling the greatest squeeze are a combination of basic necessities — which are, well, basic necessities — and precisely the more recreational items (e.g., air travel, gas, cars) likely to see spikes in demand over the summer. Not brilliant.

Meanwhile, as inflation soars the stock market is continuing its slide: These latest inflation numbers confirmed investors’ sense that the Fed will continue to raise rates; don’t look at your 401k.

US CPI, Change from Previous Year 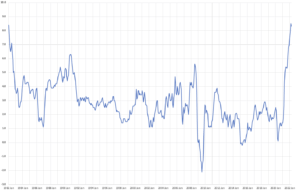 Source: US Department of Commerce

The US Department of Commerce is conducting an investigation into solar panel makers from four Asian countries suspected of serving as a conduit for, and hence helping dodge tariffs on, Chinese suppliers. Top climate officials, numerous utility and solar firms, and environmental groups alike are pushing back, saying the prospect of retroactive tariffs on panel imports will devastate the US solar industry.

Certainly, the tariffs will be disruptive – and, in fact, already are. Projects nationwide have been halted. Two-thirds of planned capacity additions this year could be at risk. But far more threatening is America’s continued reliance for clean energy sources on foreign imports, especially when that reliance is on China, whose government uses predatory practices to hollow out other countries’ solar industries, and sees supply chain dominance as a point of geopolitical leverage. And that’s not even to mention the forced labor risks throughout China’s solar industry, or its reliance on highly polluting coal-fired electricity.

Potential tariffs may well cause temporary pain in the US solar industry. Some existing solar firms may go under. But the answer is not to lift tariffs or to stop calling foul on China. It is to pair tariffs with investment in domestic manufacturing capacity.

This week, the city’s de facto central bank intervened twice in three days to defend the local currency’s US dollar peg, selling a combined 1.08 billion USD to ensure that the Hong Kong dollar remain within the trading band of HK$7.75 and HK$7.85 to the greenback. Even before this week’s intervention, the Hong Kong Monetary Authority had been drawing down its foreign currency reserves. The war chest, though still at a sizable 465 billion USD at the end of April, may shrink more as the US Fed continues to tighten monetary policy. Meanwhile, capital outflows have picked up pace, to the tune of 104 billion USD in 2021, as the Hong Kong stock market has taken a beating.

All of this said, betting against the Hong Kong dollar is no easy task; it foiled George Soros in 1998 and has tripped up many a hedge fund since. And the peg is useful to China, so one can expect Beijing to serve as its ultimate backstop. At the same time, the current squeeze is sufficient to create market jitters; could catalyze some creative monetary policy from both Hong Kong and Beijing; and may also reflect similar pressures on the mainland. 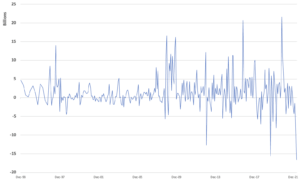 …And Crypto More than Waivers

Speaking of currencies, this week has seen a massive crypto crash. Bitcoin hit a ten-month low; hundreds of billions of dollars in stock-market wealth have been destroyed over the past days by crypto alone; observers are likening the debacle to the dot-com bubble of the 1990s. Nowhere is the fall more evident than in the case of Terra (UST), a stablecoin that was pegged to the US dollar, which proved not to be so stable this week. UST is essentially backed by a sister cryptocurrency, Luna, issued by the same firm (in a logic that we will not attempt to explain – because, for all the elaborate acrobatics in which it is framed, it makes no sense). Luna’s value started to slide this week. It dragged Terra with it; both quickly entered a “death spiral,” losing some 99 percent of their value. The big question: Is this the moment when everyone discovers that the emperor has no clothes – or is this emperor too big to fail? And if this really is a dot-com bubble redux, will there be an Amazon that rises from the ashes?

The Department of Defense Reconsiders the Definition of a “Domestic” Source

The US Defense Production Act (DPA) currently defines “domestic source” as business activities performed in, and that procure from, the US and Canada. There is now a push to extend that definition to include the UK and Australia, according to drafts of recommendations that the Department of Defense (DoD) is making to Congress. The existing definition, the DoD notes, “unnecessarily constrains DPA authorities and limits their abilities to ensure a robust industrial base.” The expanded definition would not be unprecedented: the 2017 National Defense Authorization Act broadened the definition of national technology industrial base to include the UK and Australia in addition to the US and Canada. The DoD argues that just as this earlier definitional widening allows the US to “leverage the resources of its closest allies to enrich US manufacturing and industrial base capabilities and increase the nation’s advantage in an environment of great competition,” so too would the proposed change to the DPA. It would certainly be in line with US efforts to work closely with allies and take coordinated multilateral strategic actions to secure critical supply chains.