As the Chinese government lets COVID-19 rip within its borders, it has also ceased publishing daily case figures and appears to have stopped uploading genomic sequencing to the international GISAID database.

“Given the reported surge in infections in mainland China, it is of particular interest what the circulating variants are. However, there is a total lack of recent sequences from community circulation in mainland China,” researchers from the University of Basel’s pandemic surveillance program wrote in their latest weekly variant report.

Beijing’s gigantic black box poses an urgent problem for the rest of the world. Most directly, it hinders scientists’ ability to track the evolution of virus strains and monitor the potential development of new variants.

Critics say these China-targeted travel restrictions are useless: COVID-19 cases are spreading worldwide anyway, and testing arrivals from China won’t change that. But that critique misses an important point, the need for acquiring information that China would rather hide. Since Beijing is characteristically obfuscating facts and censoring important data, other countries must gather what information they can. That means testing travelers from China and performing genomic sequencing on positive cases. From this, countries can extrapolate the scale of the outbreak in China, based on the percentage of positive cases on flights. The pace at which new strains emerge among arrivals from China can also be clues to how quickly cases are spreading in the country.

Meanwhile, as COVID-19 ravages China, production in the country is suffering. At the Volkswagen plant in Changchun city, the company has had to halve its work shifts as employees call in sick; in India, drug-makers are positioning to hoard supplies, concerned that a drop in China’s output will wreak havoc on global supply chains. A Reuters poll on Friday showed that China’s factory activity is expected to decline in December.

While Beijing appears to stall on a homegrown antiviral drug

Meanwhile, as Covid runs rampant through China, Pfizer’s antiviral pill, Paxlovid, has become a unit of political and commercial capital. The Financial Times reported this week on how “the limited supply has turned Paxlovid into a popular gift among China’s well-connected,” with one official at a distributing hospital in Beijing noting that the drug has become “more coveted than Moutai.”

But even as China runs short on Paxlovid, there’s no public sign that the country’s drug regulators are moving with any urgency to grant emergency use approval for VV116. Junshi company filings suggest that the process has been stalled since at least June. In the meantime, Chinese regulators earlier approved azvudine, another homegrown Covid antiviral, for emergency use — despite the lack of publicly available trial data on its efficacy.

The US jobs market holds on tight

The number of Americans filing applications for unemployment benefits rose last week. That could be a good, if tentative, sign that the Fed’s campaign to cool demand is working. But unemployment claims remain near historic lows, indicating the labor market continues to stay tight. Nevertheless, US markets edged higher on the latest jobless data, while 10-year Treasury notes ticked down slightly. 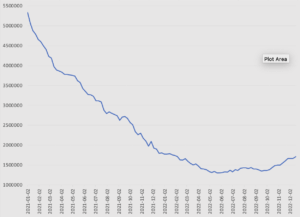 Source: Department of Labor via FRED

Signs of cooling in Japan and Spain?

Over in Japan, another indicator points to cooling demand: Factory output shrank for a third straight month in November, edging down 0.1% from October, as orders from overseas decline. The data point supports the Bank of Japan’s stance that the country is not ready to pivot from ultra-loose monetary policy just yet — even though some analysts pointed to last week’s yield curve control move as a sign that Tokyo will raise rates imminently to rein in inflation.

Meanwhile, inflation in Spain came in at 5.8% in December, lower than what economists had forecast and the slowest annual pace this year. Could this be a sign of easing price pressures across the eurozone? More December inflation data from member states will follow, with Germany’s due on Tuesday (January 3). A broader deceleration across the bloc could convince the European Central Bank to slow the pace of rate hikes.

Russia hit back this week on oil price cap imposed by the G7, EU, and Australia: For five months from February 1, it will ban the sale of crude oil and oil products to any country abiding by the 60 USD per barrel cap. As designed, the price cap is aimed at hitting the Kremlin’s coffers without causing major disruptions to the flow of Russian oil on global markets.

Given that the current price of Urals is well below the cap, some analysts have pointed out that the cap will have limited immediate impact on Russia’s current oil revenues. The low price also casts doubt on whether Russia would really want to cut production, as it has threatened to do by 5% to 7% early next year. Plus, production cuts could push the breakeven oil price still higher, posing a further threat to Russia’s fiscal system. 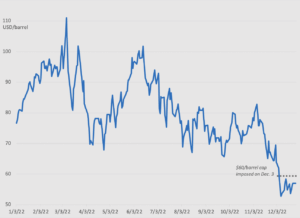 Japan is on an LNG buying spree. This week, the country’s top gas explorer Inpex inked a deal with Venture Global for a million tons of US LNG per year for 20 years. Separately, Japanese trading groups Mitsui & Co., Itochu, and energy firm JERA are set to close deals for some 2 million tons of LNG from Oman for a decade starting from 2025. Locking in these long-term deals will secure supplies at attractive rates for Japan, which is heavily reliant on imported energy and has had to deal with the double whammy of surging energy prices and a weakening yen.

Meanwhile, Bloomberg ship tracking data shows that Japan is set to import its first shipment of crude oil since May from Russia’s Sakhalin-2 facility. Quick recap: the Sakhalin-2 is a joint venture with Russia that accounts for around 10% of Japan’s LNG imports. In July, Russia seized full control of the project; the Japanese JV partners Mitsui and Mitsubishi were eventually allowed to keep their stakes, but the UK-based Shell had to walk away empty handed. Tokyo says the import of oil from Sakhalin-2 is key to the project’s stable operations.

An added wrinkle Japan has to iron out: Marine insurance for LNG shippers in Russian waters. Three major Japanese insurance companies have said they will stop providing cover for marine hull war risks in Russian, Ukrainian and Belarusian territorial waters from Jan. 1, because international reinsurers are withdrawing coverage of Russia-related risks. That has Tokyo worried. The government this week intervened with a rare request urging domestic insurers to take on additional risks and keep providing marine war insurance to ensure continued LNG imports from Sakhalin-2. In the meantime, Japanese insurers are scrambling to secure enough reinsurance, an effort complicated by the fact that many of their Western counterparts are out of office for the holidays.

Prices of plastics are crashing. One major downward pressure is coming from China, where plunging domestic demand has meant producers there are diverting excess supply to export markets like India. The same goes for steel: Chinese customs data show steel exports rising 28% year-on-year in November, while domestic demand for the key construction material is projected to fall 4% in 2022. And the effects are rippling beyond Asia: Demand and prices for US recycled polymers are expected to fall next year, in part pushed down by virgin polymer prices.

Exxon Mobil is suing the EU over the bloc’s imposition of a windfall profits levy. The energy giant argues that the levy amounts to a direct income tax, which would require unanimous approval by member states in the European Parliament — something the bloc did not seek because it imposed the windfall levy using a special emergency tool. Besides challenging the EU’s legal authority for imposing such a levy, Exxon has maintained that the measure is counterproductive, deterring investments in European energy projects that would boost supply and smooth prices.