With China moving on from COVID zero, the energy market looks to tighten – even more. Plus, US LNG exports ramp up, offshore wind energy hits headwinds, the US job market stays tight, and manufacturing contracts, globally. And will Taiwan develop its own Starlink satellite system?

Earlier this week, Germany received its first tanker of LNG from the US. The shipment docked at the newly built floating terminal in the port of Wilhelmshaven—a facility that typically takes five years to construct, but was completed in five months and inaugurated last month.

The development marks a milestone in Germany’s pivot away from Russian gas and toward more diverse sources, and the US’s role as a key supplier of the fuel to Europe. Uniper, Germany’s de facto nationalized gas giant and the terminal’s operator, is expected to bring more LNG to Germany this year, both at Wilhelmshaven and the Brunsbuettel terminal scheduled to open early this year.

Japan is eager for American LNG, too. The country sources about 10% of its LNG from the US, and this week a unit of Tokyo Gas—the largest natural gas utility in Japan—neared a 4.6 billion USD deal to buy US natural gas producer Rockliff Energy, which produces over 1 billion cubic feet of natural gas a day.

Meanwhile, China’s appetite for LNG is set to grow this year, too, though it will likely take several months for demand to ramp up as the country grapples with its massive COVID-19 outbreak. The country has already sealed several long-term LNG import deals, including a 27-year contract with QatarEnergy and a 23-year deal with Cheniere Energy.

And the US ramps up LNG exports

To meet the heightened global demand for LNG, the US has massively stepped up its exports. Last year, the US tied Qatar as the world’s top LNG exporter, with both countries hitting 81.2 million tons for 2022. The US is set to edge out Qatar for the top spot this year, once the Freeport export facility in Texas is fully repaired and back in operation.

While US energy giants look abroad for customers, however, they are beginning to focus on more projects closer to domestic shores. Chevron says 70% of its annual budget will be spent on production in oil fields in the US, Argentina, and Canada. Exxon Mobil says it will spend a similar share in LNG projects at home, and in Guyana and Brazil.

Partly, this retrenchment is driven by pressure from investors for the companies to cut costs and increase profits by culling non-core businesses overseas. The next-order question: As Exxon and Chevron pull back from projects across southeast Asia, West Africa, Russia and parts of Latin America, will a foreign player swoop in to plant footholds in those places? 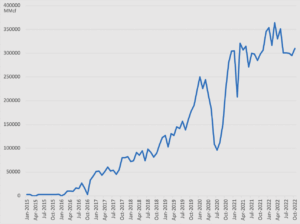 China wants to lift the boycott that it imposed in 2020 on Australian coal. This development follows the incremental thawing in Beijing-Canberra relations, evident in Australian foreign minister Penny Wong’s visit to the Chinese capital last month. But more substantively, China’s new openness to coal trade stems from rising energy demand as the country emerges—albeit chaotically—from three years of zero-Covid and after cold weather in China’s north hampered domestic production.

Still, Chinese buyers will have to contend with paying higher prices for Australian coal: Australian producers have reoriented trade flows of the commodity to existing and new customers.

In the meantime, Beijing’s bans on Australian barley and wine remain in place. The message is clear: China will use economic coercion as it sees fit, and selectively ease off when it suits its needs.

Offshore wind projects in the US look to be running into some headwinds—what Danish firm Ørsted A/S, which is developing about five gigwatts of offshore wind capacity along the East Coast, described as “unexpected and unprecedented macroeconomic challenges.” Those challenges include supply chain disruptions that have hampered the availability of vessels to transport massive turbines; inflationary pressures that have driven material costs higher; and increased financing costs thanks to rising interest rates. As a result, several developers including Avangrid and Mayflower Wind Energy are trying to renegotiate financing agreements for ongoing projects.

Those same macroeconomic challenges could deal a setback to offshore wind projects in Vietnam, too. Japanese and European firms have been eager to develop projects there, attracted by the strong winds off the country’s southern coast and the government’s renewable power push. Japan’s Sumitomo Corp. announced an offshore wind project in Vietnam in September, and Orsted is pursuing several potential prospects in the country.

A gauge tracking manufacturing activity is flashing red in countries across the world. The Institute of Supply Management’s Producer Manufacturing Index (PMI) for the US contracted for a second consecutive month in December, falling to 48.4 last month from 49.0 in November.

China’s official PMI tracked by the National Bureau of Statistics also fell sharply, hitting 47.0 from 48.0 in November. Singapore is down, too: 49.7 versus 49.8 the previous month. And Japan saw its factory activity post the sharpest drop in over two years.

Is there a silver lining to all this? Hardly. But worth noting: Slowing manufacturing activity could drive a fall in consumption of diesel and other distillate fuel oils, helping replenish depleted distillate inventories.

The US job market stays tight

The December US jobs report, out Friday, shows a still-strong labor market, albeit also signs of slowing wage growth. Overall, employers added 223,000 jobs in December, the smallest gain in two years (though above the 200,000 predicted by economists). Unemployment inched down to 3.5% from 3.6%, matching its lowest rate in decades. And labor force participation ticked up to 62.3%, from 62.2% the previous month, adding to hopes that a sustained increase back to pre-pandemic levels can help ease labor shortages.

Meanwhile, wage growth is slowing. Average hourly earnings for private-sector employers rose 4.6% in December year-on-year, less than the 5% forecast by economists, and down from the 4.8% in November (which itself was revised down from 5.1%). Wage growth has been on a downward trend since June; the latest data further assuaged fears of a wage-price spiral.

Markets seem to think these are the ingredients needed for the much-hoped-for soft landing: the Dow rallied about 700 points on Friday (January 6) following the data release, while the S&P climbed 2.3% and the Nasdaq rose 2.6%. But that enthusiasm doesn’t address the question of how a still-tight labor market might resolve inflationary pressures – or responsive interest rate hikes. 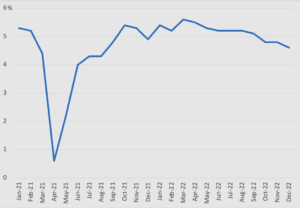 New and existing venture funds raised a record 162.6 billion USD across 769 funds in 2022, according to Pitchbook data. But a lot of that money is sitting undeployed: Funding for US startups fell by 31% from its peak in 2021, to 238.3 billion USD compared to a record 344.7 billion USD the previous year. That means the volume of unused funds is at a record high, as investors have held back amid rising interest rates, geopolitical uncertainty, and market volatility and pessimism.

Taiwan is looking to develop its own satellite communications provider, per the Financial Times, in order to better prepare against a potential attack from China that could target its communications infrastructure and sever its connections to the outside world. Taiwan is taking inspiration from the way Elon Musk’s Starlink satellites have helped ensure Ukraine’s communication abilities despite attacks from Russia. The country will reportedly spin off its low-Earth orbit (LEO) satellite communications unit of its space agency into a company, and is seeking investors to fund the initiative.

Contrast that with China, which independently owns and operates 426 LEO satellites alone, in addition to 78 GEO satellites, 29 medium-Earth orbit satellites, and three elliptical orbit satellites. And, as we’ve previously noted, China has an additional source of asymmetric advantage relative to other players: The bulk of its satellite network is government controlled, with deep ties to the state military apparatus.

2023-01-08T09:23:19-05:00#LNG #offshore wind #Taiwan #US manufacturing PMI |
FacebookTwitterEmailPrint this page
Force Distance Times Dispatch
Subscribe to the Force Distance Times weekly newsletter to keep up to date on our latest commentary
We respect your privacy