A week of wildcards

The two major types of geopolitical upheaval: Perforations in personality politics and swells of social unrest. This week has both, in spades. First, a wave of attacks – some literal some figurative – on lynchpin political figures. On Wednesday, the OPEC secretary-general Mohammad Barkindo died unexpectedly, at a time of volatile energy markets. On Thursday, Boris Johnson resigned after a historic Tory revolt in which nearly 60 members of his government stepped down, leaving the UK with a lame duck government (though Johnson maintains that he will stay on as a caretaker leader while the Conservative Party identifies a successor). And on Friday, former Japanese Prime Minister Shinzo Abe was assassinated. Though Abe retired in 2020, he had remained a critical player in Japan’s domestic, and international, affairs.

Meanwhile, surging energy and commodity prices, as well as interest rates, compounded by and compounding a quarter-trillion-dollar pile of distressed debt, threaten to push the developing world into a cascade of defaults and social upheaval. In Sri Lanka, unrest and political chaos driven by impossible fuel and food prices have already led to default. Now, protests have broken out in Libya over rising prices and chronic power cuts – and El Salvador, Ghana, Egypt, Tunisia, and Pakistan are all teetering on the edge of default. This is the type of economic and social disruption that promises cascade effects. The added twist: Potential restructuring deals for countries in need of debt relief hinge in large part on China.

Crude prices are down just over 3 percent for the week, and 13 percent for the month; US national average gas prices are back well below 4 dollars per gallon. But as with the metals meltdown in recent weeks, the drop in crude seems to be more blip than trend. Fundamentals of the energy market have not changed: The Russia-Ukraine war is dragging on, continuing to wreak havoc; supply growth from the US is slow thanks to years of underinvestment; and Europe may have to rely more on oil as natural gas supplies remain short.

And don’t underestimate the significance of this natural gas squeeze. Thanks to Russia’s invasion of Ukraine – and black swans like the recent fire at a Texas LNG facility – prices of the fuel are up by some 700 percent in Europe since January 2021. In Germany, these surging gas prices are already wreaking acute economic havoc: Chemical giants have cut output, a utility firm may get bailed out, and a recession is looming. Asia isn’t spared, either: Surging gas costs have caused blackouts in Pakistan and energy curbs in Thailand (no small strain on social stability). And this all before Europe enters winter with gas reserves well below the mandated 80 percent minimum.

Australia’s commodity exports have surged to record levels, buoyed by supply disruptions from the Russia-Ukraine war. Export earnings from goods including iron ore, thermal and coking coal, LNG, and lithium hit 405 billion AUD (275.4 billion USD) in the year ended June 30 and are forecast to grow further in the coming year. In an era defined by supply shortage, don’t sleep on Australia. But also, don’t sleep on the domestic economic contradictions that bely Australia’s rosy export picture. For example, while the country’s LNG earnings have soared this year – and it sits as one of the world’s top gas exporters – a failure to preserve supply for consumption has sparked shortage at home.

By contrast, China’s companies are doubling down. Zijin Mining recently acquired a 71 percent stake in a company that’s mining lithium in Hunan province. The mine is a low-grade one, with only 0.29 percent lithium oxide content. But no matter: The market is red-hot and Zijin says it wants to “seize the opportunity” of high lithium prices via “rapid construction” at the new mine. Zijin’s purchase comes after its acquisition of Canadian company Neo Lithium last year, and a new joint venture exploration project in the Democratic Republic of Congo. Meanwhile, China is expanding its critical mineral investments in the Xinjiang region. This adds a new twist: Remember that last week, the US Uyghur Force Labor Protection Act which went into enforcement, banning imports of goods made in Xinjiang, unless those can be proven not to be made with forced labor.

While US stocks continue to slide amid Fed tightening and recession fears, China stocks rallied to notch their best month in a year and a half. Two China ETFs of largely tech and services stocks jumped in June while the S&P 500 slumped over 8 percent. Citigroup strategies are feeling bullish on China, upgrading the country’s stocks to overweight. There are indeed some reasons for optimism. On the Covid front, a Chinese homegrown monoclonal antibody treatment just launched commercially this week, and a domestic Covid antiviral pill may get approved soon. But don’t get too optimistic: Beijing rolled out a vaccine mandate for the city on Wednesday, only to rescind it late the next day. Meanwhile, any talk of China’s tech crackdown “ending” is probably premature; Beijing has only just begun its project to exert control over emerging tech champions. China bulls will be China bulls, but the country’s politics-driven volatility isn’t going away, either. 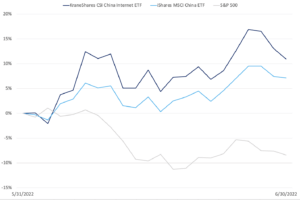 …while the euro keeps sliding 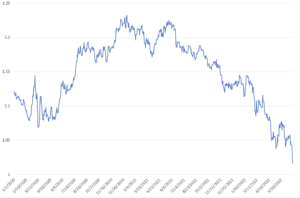 As of Friday’s market close, 1 euro will now buy you 1.0167 USD — just a hair away from euro-US dollar parity. The euro has been sliding since last summer. It has only accelerated its tumble following Russia’s invasion of Ukraine. For years, Germany’s economy, which makes up 21 percent of the EU’s GDP, has been predicated on unfettered access to cheap Russian fuel. Now, that bargain has now been shattered: The engine for the EU bloc risks running out of fuel. Europe’s economic growth looks like it may be hamstrung, until the country can build the infrastructure to completely reorient away from dependence on Russian fuel. That will take time. And until then, the euro, and Euro bloc, look likely to continue taking a bad beating.

The US-China tariffs debate drags on

Will or won’t the Biden administration roll back Trump-era China tariffs? That question has dragged on for months. As inflation continues to soar and the midterms continue to approach, the Biden administration seems keener and keener on the idea; it was discussed during a call this week between US Treasury Secretary Janet Yellen and Chinese vice premier Liu He. But here’s the thing: Scrapping the tariffs won’t meaningfully reduce inflation in the US. Nor have the tariffs fixed US-China trade imbalances. Rolling them back won’t change calculus. Reducing Beijing’s trade surplus with the US – on track for another record this year – will require a surge in domestic investment or domestic consumption in China, and more fundamentally, a rebalancing of China’s entire economy. Which is to say, while the tariffs might be useful leverage over China, they distract from the real question: How the US can rebuild its industrial base.