This week, average gasoline prices in the United States crossed an unprecedented threshold: Five dollars a gallon. And there is no end in sight. The supply shortage has not been resolved; wholesale futures markets prices continue to surge. Nor is demand likely miraculously to dwindle as the country enters not only summer, but a first summer of relatively unhindered mobility since COVID-19 struck. And gas is just one part of still-galloping inflation:  Consumer Price Index figures released on Friday show that, driven in large part by food and energy costs, inflation reached 8.6 percent in May, up from 8.3 percent in April and well above most expectations. This might not be a surprise for anyone who has stepped foot in a grocery store this month. Still, it comes despite hopes of a “soft landing” and assurances that one was near. And it makes it all but assured that the Fed will hike rates up ASAP, further exacerbating fears of a recession on the horizon.

Russia makes hay out of Ukrainian wheat; the US settles with making noise

Russia is reportedly selling wheat plundered from Ukraine on the international market. The US has responded with warnings to around a dozen countries, mostly in Africa, that the wheat shipments headed their way constitute stolen goods. These warnings are unlikely to have much effect. They don’t provide any alternative – and amid soaring global food costs, rising hunger, and the risks of widespread famine, calories trump values. Responses like this from Washington are one the worst of all worlds. 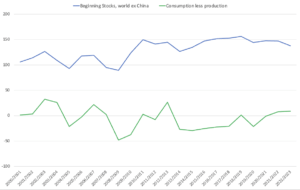 They telegraph that the US cares about Russia’s moves and wants to push back. But, ineffective, they also telegraph that the US is all bark and no bite. What could Washington and its partners do instead? There is the possibility of distributing existing global wheat inventories to countries in need: At the beginning of this year, there were 138 million metric tons of weight in inventories worldwide, excluding China. But wheat consumption is predicted to exceed production this year and a band-aid only goes so far. More consequential would be to intervene from the point of supply – for example, by helping Ukraine to transport its grain out of the country, and to protect its territory, rather than letting Russia run roughshod over the global food supply.

In the meantime, the challenge to global food supply looks only to be growing. Bad weather continues to threaten crop harvests – with Pakistan’s mangoes among the latest victims. And major agricultural producers are responding by restricting exports, thus further tightening global supply: In May, India wheat exports; on Wednesday it announced that sugar exports would require specific licenses. Malaysia has followed suit with limitations on chicken exports.

The Toronto Stock Exchange this week launched a battery metals index that tracks Canadian-listed firms working in the production or exploration of metals used in battery manufacturing. The index could help drive more capital towards the sector – certainly a welcome development as the lithium industry alone is projected to require 42 billion USD of investment to meet 2030 demand. One thing to note: among the index’s top 10 constituents is a Chinese state-owned firm, China Gold International Resources, the overseas listing vehicle of China National Gold Group.

Australia has a gas export problem

Australia is one of the world’s top exporters of LNG. Yet right now, it faces a gas shortage. How? As research from the Australia Institute’s climate and energy program puts it, Australia doesn’t have a gas supply problem—it has a gas export problem. Currently, about 75 percent of Australia’s natural gas production is exported, and in many cases according to long-term contracts with Asian buyers that tie it up. This leaves very little for domestic consumption, and winter is hitting down under. Compare this to the US: In 2020, the United States exported around 15 percent of its natural gas production via pipelines and as LNG, and 52 percent of its petroleum production. Gas analysts in Australia are now calling for the country’s eastern states to put in place a gas reservation policy, similar to that which Western Australia implemented in 2006, that would require all new gas export projects to reserve a certain percentage for domestic use.

More broadly, Australia’s travails constitute a dangerous barometer what winter has in store elsewhere in the world – especially among less well-LNG-endowed countries. And black swans are not helping: On Wednesday, an explosion hit a Texas liquefied LNG plant. The Freeport LNG export facility – responsible for about 20 percent of US LNG exports – is expected to remain closed for at least three weeks; it has issued a force majeure to buyers with shipments scheduled until at least June 30.

The Italian government this week stepped in to block the transfer of technology and software from Robox, an Italian maker of electronic components for robotics and motion control systems, to the Chinese industrial robot maker Efort Intelligent Equipment. Efort’s move to raise its stake in Robox to 49 from 40 percent was approved. This is the seventh time Italy has applied its anti-takeover legislation, introduced in 2012 to protect strategic industries from unwanted foreign bids. Six of those uses have rebuffed targeted bids from Chinese firms. This trend could suggest a real turning point for Italy, and Europe more broadly: For years, China has, as a matter of state policy, taken advantage of weak investment-screening rules in Europe to acquire sensitive technology.

The Biden administration eases up on solar tariffs

On June 6, the Biden administration announced a two year suspension of tariffs on solar products from four Southeast Asian nations, re-igniting hope in the industry, which has been stalled by tariffs on imports from China and that China channels through third parties in Southeast Asia. This move is a clear concession to inflation and the solar lobby – at the expense of the administration’s stance on trade. But it is no panacea for the solar industry: On June 21, the Uyghur Forced Labor prevention Act will go into effect, banning the import into the US of any goods produced, mined, or manufactured, in part of in whole, in Xinjiang into the United States. And Xinjiang accounts for approximately 60 percent of all global production of polysilicon, a fundamental input into solar products.

The bigger picture: This solar tariff suspension risks suggesting that the administration might be prepared to respond to out-of-control inflation by relaxing tariffs on Chinese goods, rather than investing in alternative supply. Of course, there are plenty of voices pushing against such a move: US trade chief Katherine Tai, for example, has said that fighting inflation is “a more complicated issue than just tariffs” on Chinese goods. But clearly such voices did not win in the solar fight.

The Chinese stock market inches up, but can investor confidence?

In response to signs this week that Beijing may be wrapping up its tech crackdown and that the worst of China’s COVID-19 lockdowns might be over, China stocks staged a rally. For example, the CSI 300 — which has shed 15 percent this year — is up about 4 percent since a week ago when Shanghai said it would begin loosening COVID restrictions. But China stocks are still a long way from a full recovery: The slight uptick in MSCI China barely makes a dent in the yawning gap in the index’s performance relative to its US counterpart. Of course, that could change overnight. But it could also signal that regulatory crackdown plus COVID-19 lockdowns have done lasting damage to global investor confidence in and appetite for Chinese markets. It has long been clear that Chinese markets are beholden to the whims of political leaders not market fundamentals. Now the costs of that are clear, too. 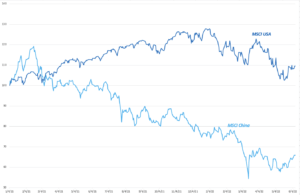 Lawsuits are coming for the London Metal Exchange

The proprietary trading firm Jane Street and hedge fund Elliot Associates have separately filed suits against the LME for losses caused by the exchange’s chaotic cancellation of trades in March following a short-squeeze induced 250 percent rise in nickel prices. Both complainants argue that LME’s actions were illegal; the exchange says their complaints are “without merit.” Regardless, discontent among traders and hedge funds runs deep, and more lawsuits could be on their way. How the courts rule will have ramifications for London’s financial sector. Investors will demand answers on whether the city can manage risks and foster a level playing field. And there’s much uncertainty for LME, too. In the event that compensation claims bankrupt it, its parent Hong Kong Exchanges and Clearing – behind which stands the Chinese government — could be forced to bail it out.

BYD is making moves – do its customers recognize the risks?

The Chinese EV giant BYD said this week that it will be supplying Tesla with lithium-iron-phosphate (LFP) batteries “very soon.” The deal means Tesla will no longer need to solely rely on Chinese State-owned CATL for LPF batteries. It could also help transform BYD into a major supplier for the broader EV industry, possibly paving the way for a separate battery unit spinoff. But there are risks here, too: In December 2021, Washington banned federal transit funding for manufacturers like BYD, citing ties to the Chinese government and military systems. Those concerns are unlikely to have disappeared. Could they create problems for EV companies reliant on BYD inputs?

The SEC wants to rein in meme stocks

Democratised and “free” retail trading, popularised by r/WallStreetBets and apps like Robinhood, has a dark side: frenzied market speculation like the GameStop mania, which in turn drives more frequent financial booms and busts. The US Securities and Exchange Commission now wants to fix things. Its chairman Gary Gensler this week unveiled a plan to overhaul rules on payment for order flow, a practice in which retail brokerages like Robinhood sell their clients’ orders to wholesale market makers like Citadel. Closer SEC scrutiny of retail trading could include mandating that market makers disclose more data on the fees that retail brokerages can earn, as well as the timing of trades. All that will add friction to armchair investors’ stock-trading, making retail investing a little less fun. Is that such a bad thing?

2022-09-26T12:38:22-04:00#China #EVs #inflation #oil and gas #Russia-Ukraine |
FacebookTwitterEmailPrint this page
Force Distance Times Dispatch
Subscribe to the Force Distance Times weekly newsletter to keep up to date on our latest commentary
We respect your privacy