With aluminum tariffs in the works, the international market is increasingly bifurcated and in the West, the dominant theme is shortage: Aluminum crunch, refining crunch, wheat crunch, freight crunch, LNG crunch narrowly avoided – for now. Plus, in markets, inflation persists; debt risks brew among emerging economies; and Germany, as its trade surplus shrinks, reconsiders dependence on not only Russia and China, but also the US.

The US mulls a ban on Russian aluminum

Bloomberg and Reuters reported this week that the White House is mulling a full ban on Russian aluminum in response to Russia’s intensified attacks on Ukrainian cities. The metal has long been spared from sanctions given its crucial and ubiquitous use in manufactured products. Now, three options are reportedly being considered: A full ban, an effective ban by way of punitive tariffs, or sanctioning Russia’s aluminum producer Rusal.

Any restriction would likely increase global aluminum prices and disrupt the metals market as consumers scramble to secure alternate sources. And the US deliberations over banning Russian aluminum come as London Metal Exchange is discussing whether to ban all Russian metals from the bourse. Considering the wide-ranging role of aluminum in modern industry, the implications would be enormous – across everything from consumer inflation to defense industries that depend on aluminum inputs.

Or at least, they will be in the West. Russian metal companies are likely to continue to find a warm reception not only in China but also in Hong Kong, where Rusal is listed on the city’s exchange, a sanctioned Russian steel tycoon’s superyacht is currently docked, and local authorities say they won’t enforce the US’s “so-called sanctions.”

Zooming out, it’s not just geopolitical tension with Russia that threatens the international aluminum market. There’s a separate, wildcard risk coming out of China, too. China produces 60 percent of the world’s primary aluminum; research published last spring identified indicators of forced labor associated with that aluminum production. With the Uyghur Forced Labor Prevention Act now in enforcement in the US – and US allies internationally increasingly taking similarly serious action on the subject – aluminum exports from China could soon find themselves facing greater scrutiny and, even, restrictions.

These twin pressures make the aluminum case a prime example of today’s bifurcated global market – and the challenge the West faces as it seeks to shore up supply in this new reality. China and Russia are the world’s first and second largest aluminum producers, respectively. Amid growing geopolitical tension, the West is poised to restrict aluminum imports from at least one if not both, in a bid for leverage. But Russia and China will continue to trade with each other. In metals as in energy, the market seems to be splitting into two – one with the resources and one with the legacy architectures of influence. For how long can the latter outweigh the former? And at what point will the West have to start competing with supply?

Diesel and gasoline prices are rising again. The OPEC+ cuts last week are part of the story, but not the full picture. A refining crunch is also to blame. In the US, there have been multiple unplanned refinery outages due to fires and infrastructure problems. In the Netherlands, Shell’s Pernis plant—the largest oil refinery in Europe—suffered a malfunction. Meanwhile, in France, worker strikes have taken 60 percent of national refining capacity offline and left a third of the country’s fuel stations facing supply difficulties. All this comes as the EU is set to impose a full ban on imports of Russian refined petroleum beginning in February.

France is taking things seriously. The French government has ordered staff to return to work at an ExxonMobil refinery or risk facing either a 10,000 euro (9,700 USD) fine or six months imprisonment. Authorities have also warned that workers at a TotalEnergies refinery could be next to face a similar return-to-work order. But a) unions have vowed to challenge that order in court and b) the labor problem is just one of many challenges facing refining capacity; the others will prove even more difficult to address.

More turbulence is coming for wheat globally. The escalating Russia-Ukraine war sent wheat futures up as much as 7.9 percent in Chicago earlier this week, as Moscow launched a barrage of missile attacks across Ukraine following last weekend’s massive blast on the Kerch strait bridge. The intensified military attacks are raising doubts about the UN-brokered Black Sea grain export deal that is set to expire next month.

The uncertainty isn’t helped by the fact that the US, a major grain producer, is forecast to export the smallest amount of wheat for 2022/23 in five decades due to slow sales and uncompetitive prices of American wheat. Plus, in Argentina, a top-seven global wheat supplier, the government is reportedly considering tightening export controls as the country deals with drought-withered crops and spiraling domestic food inflation. 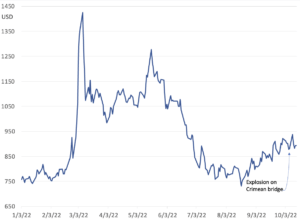 Last month’s White House-brokered eleventh-hour deal to stave off a crippling nationwide rail strike is at risk of crumbling. A large union representing over 22,000 rail workers this week voted down the tentative five-year contract agreement 56 percent to 43 percent, citing the lack of paid sick time off as the top concern among members. The rejection by the Brotherhood of Maintenance of Way Employees (BMWED) again raises prospects of a work stoppage that could coincide with peak holiday shipping season and wreak havoc on supply chains. It’s not a done deal yet, however: Five of 12 rail unions have ratified agreements as of this Tuesday; the remaining six are scheduled to hold votes before November 20.

Natural gas inventories in the EU and the UK (EU28) have climbed above 1030 terawatt-hours (TWh) as of October 12, according to data Gas Infrastructure Europe. Storage levels in the EU are above 91 percent and the UK has maxed out storage capacity. As a result, natural gas futures prices are easing somewhat.

All this is good news: It means Europe is definitely entering the winter season with enough energy. But the latter part of the winter is still an open question, especially if it’s unseasonably cold or if Russia throttles supplies. Therein lies the structural weakness of Europe’s gas storage system. As Reuters notes, “the system is designed to cope with seasonal variations in gas consumption, not the strategic loss of gas imports as a result of an embargo, boycott or sabotage disrupting imports or halting them altogether.”

Ouch. US consumer prices continue to defy the Fed and gravity, with core inflation—which excludes food and energy—up 6.6 percent year-on-year in September, the fastest pace in 40 years. Overall inflation came in at 8.2 percent, a smidge down from August’s 8.3 percent but above economists’ expectations (yet again). All of this in spite of the Fed’s aggressive tightening campaign, which increasingly threatens to throttle the domestic and global economy without, it seems, actually bringing prices down.

Markets are in a tizzy: Stocks first plunged, then staged a sharp rally. For the first time, the Dow Jones Industrial Average notched a 500-point fall and an 800-point climb within a single trading day. Mortgage rates hit a 20-year high. The market whipsaw could suggest that investors think the latest inflation data aren’t so bad after all; it could also simply be a function of traders betting on short-term bear market plays. Regardless the IMF thinks that there are troubles ahead: It warned in its World Economic Outlook released this week that “the worst is yet to come and, for many people, 2023 will feel like a recession.” 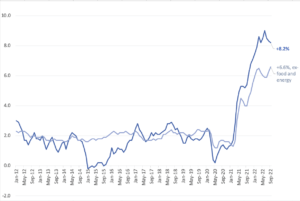 Germany’s massive trade surplus—a source of much national pride but also criticism—is disappearing as a result of soaring energy costs and weak demand among its main trade partners for its exports. This reconfiguration will reshape the German economy. It also reflects the general sea changes facing the global economy as long-held assumptions about dependence on geopolitical foes (read: China, Russia) falter. One big question is whether this leads Europe closer to the US, or farther away.

The EU’s top diplomat, Josep Borrell expanded on these themes in a provocative speech this week. Europe’s prosperity “was based on China and Russia – energy and market,” he said, but “Russia and China are no longer the ones that [they] were for our economic development.” Borell continued, adding that fundamental geopolitical relationships – including that with the US – that have defined the global macroeconomy over the past few decades have now been upended: “You – the United States – take care of our security. You – China and Russia – provided the basis of our prosperity. This is a world that is no longer there.”

TikTok enters the US logistics space

Name an e-commerce giant with a logistics arm attached to it. Amazon likely comes immediately to mind. China’s Alibaba too, with its Cainiao logistics unit. Now add TikTok, the short-video social media platform and the first Chinese-developed app to really go global.

Douyin, as TikTok’s Chinese version is called, already sells billions of dollars of goods on its online marketplace. The natural next step is to export that model to TikTok and replicate it worldwide. And TikTok is taking that step now. Since last year, it has partnered with Shopify to offer a pilot shopping feature in the US, Canada, and UK. It’s now going a step further, developing its own logistic solution: In the US, TikTok is planning to build its own fulfillment centers and provide warehousing, delivery, and product return services, Axios reported this week.

Given TikTok’s popularity, it may well have the scale to directly challenge Amazon and to weave itself more deeply into not just US popular culture, but also the actual economy. But if Washington’s concerns about TikTok’s data practices and their national security implications are any guide, the app will likely face regulatory hurdles and restrictions as it moves to expand its physical footprint in the US.

Another brewing risk to the global economy is the growing debt burdens of low-income countries. This week, the United Nations’ Development Programme called for immediate debt relief for fifty-four developing economies to avoid crippling defaults. It’s urging rich countries and financial institutions to restructure and write off debts for poorer and emerging economies so as not to jeopardize climate change, development, and poverty alleviation programs.

One cause for optimism is that so far, the strengthening USD has not precipitated the kind of full-blown, domino-effect debt crisis that engulfed Latin American nations in the 1980s, when the US hiked interest rates to tame inflation. But recall the IMF’s warning this week: The worst is yet to come. For one, the US Fed looks almost certain to continue hiking rates, and the pain that causes for emerging markets won’t necessarily scale linearly. As JPMorgan CEO Jamie Dimon put it this week: “Rates going up another 100 basis points are a lot more painful than the first 100 because people aren’t used to it.”

2022-10-16T13:33:11-04:00#aluminum #freight #Germany #inflation #TikTok |
FacebookTwitterEmailPrint this page
Force Distance Times Dispatch
Subscribe to the Force Distance Times weekly newsletter to keep up to date on our latest commentary
We respect your privacy