Inflation is up and FedEx is down: US economic indicators have alarm bells ringing. But that’s nothing next to Latin America, now facing triple digit inflation, and Europe, where energy crisis is stoking full-on intervention. Plus: Tesla walks the US-China tightrope, but shifts its balance; coal prices soar while oil production drops; and is Beijing launching a metal-buying spree? Speaking of, a new round of metal contract negotiations is about to start – how will Russia figure?

US economic indicators: Not brilliant

The tea leaves are not looking good for the US economy. Labor Department figures released on Tuesday revealed that US inflation remains stubbornly sticky, across the board, and well ahead of expectations. The latest CPI release showed consumer prices rose 8.3 percent year on year in August (compared to expectations of 8.1 percent) and 0.1 percent month on month. This inflation news was not the relief that government and markets had been expecting: It sent shares, Treasuries, gold, and oil plummeting and government bond yields soaring. Overall, amid troubling US economic indicators, this was the worst week for the S&P 500 (down 5 percent) and Nasdaq (down 5.8 percent) since June. Last month’s zero percent month on month inflation now seems like it was an illusory blip, prematurely celebrated as a sign of cooling prices.

The specifics of August’s inflation news are particularly concerning. The uptick in inflation comes despite a major, 10.6 percent drop in gasoline prices since July. Core CPI rose 0.6 percent month on month and 6.3 percent from a year ago, its first increase in six months on an annual basis, with shelter, food, and medical care the biggest contributors. In short, August data show that prices are rising, and rising quickly, across sectors. Today’s inflationary moment is not just a gas or an energy problem and it’s certainly not a passing trend. US inflation expectations fell in September; this data suggests that is foolish optimism.

The immediate question is what this means for the Fed. The likely answer is another 75 bps hike, and soon. The bigger question is what happens as it becomes clear that July was the calm before the storm; that cheaper gas or not, economic fault lines are not going away. 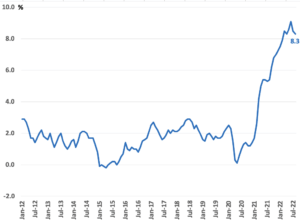 Source: US Bureau of Labor Statistics

And the week ended with another potential canary in the economic indicator coal mine to suggest that the answer is, well, not brilliant: FedEx withdrew its earnings forecast on Friday, citing astonishingly bad results relative to expectations, and projections that they’ll remain that way. The company promptly lost some 11 billion USD in market value. This isn’t just bad news for FedEx. It’s bad news for the global economy: FedEx delivers a broad spectrum of goods across the world. Its performance tends to be a leading indicator for that of the international economy. Speaking to CNBC’s Jim Cramer amid chaos on Friday, FedEx CEO Raj Subramaniam said he believes the world is headed toward recession.

Venezuela also released its August inflation figures this week: 8.2 percent. Except that these are month on month numbers. On a yearly basis, consumer prices in Venezuela are up an eye-popping 114.1 percent, according to Reuters calculations. Argentina is faring only marginally better, with annual inflation now at 78.5 percent and expected to hit 95 percent by year-end. The strengthening US dollar is making matters worse as local currencies depreciate. The result: Region-wide cost-of-living crisis, intensifying income inequalities, and bubbling discontent, with the risk of it all boiling over into widespread unrest and political instability. Ecuador, Peru, and Panama have already seen anti-government protests over soaring prices this summer. Now, warning signs are popping up that the discontent might be spreading to regional neighbors, including Colombia and Mexico.

The EU’s plan to tackle the energy crisis: Full on intervention

Over in Europe, the situation isn’t much brighter – and governments are desperate to stay one step ahead of popular discontent sparked by increasingly unaffordable energy. The result: A new era of bold government intervention in energy markets. This week, the European Commission outlined plans to collect over 140 billion USD from energy firms to shield households and businesses from eye-watering power bills through the winter. To come up with the funding, the EU proposes to cap excess revenues of non-gas electricity producers and levy a windfall tax on fossil fuel companies’ “extraordinary” profits. The EU is also proposing demand-side curbs, with a target of cutting electricity consumption at peak hours by 5 percent, and overall electricity demand by at least 10 percent through next spring. And there’s more extreme intervention underway at the nation-state level: The German government is reportedly in advanced talks to nationalize three gas firms to forestall a collapse of the country’s energy market.

Plus, as the EU reels from Russia’s weaponization of energy control, Moscow is launching cruise missiles at Ukraine’s electric grid, knocking out power and water to much of the Kharkiv region in what Kyiv describes as retaliation against its recent battlefield successes. Ukraine last weekend also had to shut down its Zaporizhzhia nuclear power station—the largest in Europe, providing about 20 percent of the country’s electricity—and won’t restart it until Russian forces leave the facility. Right when you thought the tides of the war were turning.

Tesla shifts its weight as it walks the US-China tightrope

A pair of Tesla stories this week highlights the fundamental tensions to the EV maker’s presence in China – and its apparent conviction that those are just minor road bumps. China is a key source of material inputs, production, and revenue for Tesla. There, business is booming: Tesla sales in China hit an all-time record in June. But Tesla has also seen Beijing’s COVID-19 lockdowns crimp its sales and supply chains. And the company’s reliance on China could disqualify it from Inflation Reduction Act tax credits. Can Tesla square the circle? It certainly seems to think it can; that marginal tweaks are all it needs to have its cake and sell it too.

According to Reuters, Tesla is adjusting its China-based retail strategy for COVID-19 lockdowns, not by moving out of the country but by moving showrooms away from fancy malls in major cities, where COVID-19 restrictions have decimated traffic, to cheaper suburban locations where the firm can also offer more repair services. Meanwhile, further up the supply chain, Tesla is reportedly considering shifting battery-production capacity from Germany to the US to ensure it can qualify for US tax credits. But no signs that it will cut reliance on Chinese suppliers for those batteries.

This is the reality check that narratives about US-China decoupling need: Even amid geopolitical tension and COVID-19 ripple effects, priors about the value of China’s market are deeply engrained. Companies are used to playing both sides. They are also adept at finding loopholes. None of that will change overnight.

Russian aluminum, nickel, copper, and palladium have largely continued trading globally thanks to contracts inked before the war in Ukraine. But this month brings the start of a new round of contract negotiations. And so far, it’s unclear if customers in the West will be buying Russia’s metals. On the one hand, Western sanctions have largely spared Russia’s industrial metals sector. On the other, some firms are aggressively self-sanctioning. Norway’s Norsk Hydro has said it will not buy from Russia in 2023. America’s Novelis has excluded Russia from a key tender.

Russia is a major metals exporter. Its exclusion from new deals could upend trade flows. One immediate concern: As Europe spurns Russian aluminum, its smelters are cutting output due to high energy costs. Can it fill the shortfall with alternative supplies? Plus: Will Russia dump large amounts of excess, unsold aluminum onto the London Metals Exchange, potentially distorting the global benchmark market?

A coal resurgence and a coal shortage

Humble, dirty coal is very these days pricey. Newcastle coal futures, the Asian benchmark, hit a record 450 USD per metric ton last week. Europe’s Rotterdam coal futures are also up significantly, though not as high as earlier this year. The spike in coal prices is in large part driven by heightened demand as countries scramble for alternatives to exorbitant natural gas prices: The Netherlands, Germany, and Austria have all revived coal production in an effort to respond to Russia’s weaponization of energy control. Ironically, heatwaves and droughts intensified by global climate change have also increased demand for emissions-heavy coal, as reservoirs have dried up and hindered hydroelectric plants. The bottom line: Good luck enforcing climate policy without also addressing energy security. 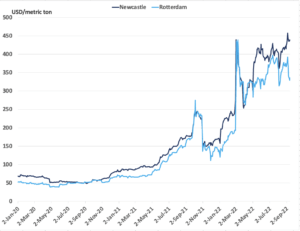 More iron-ore from Down Under, and China’s behind it

China’s state-owned Baowu Steel Group has teamed up with Australia-listed Rio Tinto to develop an iron ore project in Western Australia, with Rio chipping in 1.3 billion USD for a 54 percent stake and Baowu investing 700 million USD for the rest. The deal comes at a fraught time for China-Australia relations. But Rio Tinto has long-standing China partnerships: Baowu Steel is its biggest customer; State-owned Chinalco its largest shareholder. This week, Rio Tinto announced it had set up a strategic partnership with China Mineral Resources Group, the new state-owned conglomerate designed to give Beijing more bargaining power by centralizing iron ore purchases.

This agreement could indicate a new wave of Chinese projects: Historically, when resource prices slump, Beijing goes on a buying and development spree. And right now, China’s COVID-19 economy and property slump have depressed global iron ore demand. Nor is it just iron-ore: With nickel prices also down from their spring highs, Chinese miner Zhejiang Huayou Cobalt Co., Ltd just signed a deal with Brazilian mining giant Vale S.A. to build a plant in Indonesia. 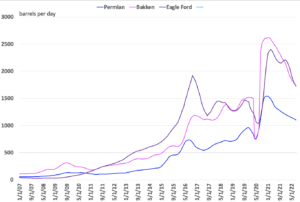 Even amid energy squeeze, oil production is ramping down. In the US Permian basin, the driver of America’s oil industry, the number of rigs drilling horizontal oil has slumped to a four-month low of 316, according to Bloomberg—casting doubt on the Energy Information Administration’s forecast of record output in October. Driving the slowdown is inflation, which makes equipment like steel drilling pipes more expensive. Plus, as we’ve pointed out before, US oil companies are opting for capital discipline instead of making expensive investments in growth. And it’s not just the US where oil production is slowing down. Nigeria’s oil output hit a 23-year low last month, beset by theft and underinvestment. None of this is good news for global supply, especially in a tight market.

There is some silver lining. China, the world’s top oil importer, may see its oil demand shrink for the first time since 2002 as COVID-19 disruptions curb economic activity (though the International Energy Agency forecasts a sharp rebound next year). And as oil prices dip, the US government will reportedly look to buy oil at 80 USD per barrel to refill its depleted strategic petroleum reserve. With this signal that it won’t let prices collapse, the government should, theoretically, encourage production.

Railroad crisis averted, but the clock is still ticking

The US has narrowly avoided a crippling freight railroad shutdown—for now. A last-minute, tentative resolution brokered by President Joe Biden and White House officials helped to break a stalemate between unions and major freight railroad companies. The stakes were high: If the talks had collapsed, workers could have paralyzed the country’s rail system, on which 28 percent of all freight by ton-miles is transported in the US, costing the nation’s economy an estimated 2 billion USD a day. And the market had braced itself for disruptions. Natural gas futures surged this week, driven in part by fears that a railroad strike would crimp coal supplies and push up natural gas demand. Prices for ethanol, which is transported primarily by rail, also rose.

But while immediate crisis has been averted, the deal is tentative and workers have more demands. They are expected to review and vote on the White House-brokered contract next week. A rejected contract would make workers legally able to strike following another “cooling off period.” Meanwhile, there’s a new potential disruptor on the horizon: Port workers on the West Coast are in negotiations for a new contract after the last one expired in June.