Washington announces another release from the Strategic Petroleum Reserve – against the backdrop of dropping US crude production and a tightening Russia-China-Saudi Arabia oil giant nexus. Meanwhile, a new supply shock looms in the form of Europe’s pending sanctions on Russian oil and the bloc’s LNG problem endures. Plus, false flag in copper prices, expanding Chinese infrastructure, a skittish yen, and rising food concerns.

The US is in a crude pickle

The White House this week announced another release from the Strategic Petroleum Reserve (SPR), this time of 15 million barrels to complete the 180-million-barrel drawdown announced in the spring. The administration says the action will “strengthen US energy security, encourage production, and bring down costs” – and that this timing has nothing to do with the upcoming midterms. (No indicator has more reliably predicted President Biden’s approval ratings over recent months than gas prices).

Regardless, the effectiveness of the SPR release is undermined by a failure to incentivize oil production. As we’ve previously noted, the government has devised a buyback plan to refill the SPR that uses fixed-price forward contracts in an attempt to encourage production.  That buyback plan sounds great in theory. But it hasn’t succeeded in spurring enough production. In fact, crude production is ramping down and remains far below pre-pandemic levels.  Last week, the Energy Information Administration forecast US crude production to be at 11.7 million daily barrels this year and 12.4 million barrels in 2023. That’s down from its estimates in April—when the SPR releases started—of 12 million and 13 million daily barrels, respectively. “As a result, a significant slice of the 1 million barrel-a-day cushion is being cannibalized by weaker domestic production,” Bloomberg’s David Fickling wrote this week. Moreover, once SPR withdrawals are done, the US risks being more in the hole than when these started – and without any band-aid arsenal.

Meanwhile, the US is also losing its grip (if it has any grip left) on international oil markets. Saudi Arabia and China held talks this week on ways to “work together to support the stability of the international oil market.” That looks like a direct snub of Washington – and comes right on the heels of the Saudi-led OPEC+’s announcement of output cuts earlier this month in an explicit show of support for Moscow. And it puts three of the world’s largest oil producers in strategic alignment as they maneuver to maximize control over global oil prices.

US crude production: actual and forecast 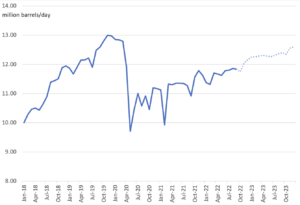 And a new oil shock looms

As the US struggles to increase domestic oil supply, a new supply shock lurks around the corner: Stranded Russian oil. Sweeping EU sanctions on Russian oil will take effect on December 5, barring seaborne imports of Russian crude to member countries and their companies from shipping, insuring and financing shipments. Craig Kennedy, an energy and finance analyst, estimates that as many as 3 million barrels a day of Russian export oil will be stranded under the imminent sanctions.

This cliff has been on the horizon since the EU agreed to the sanctions plan in June. It’s the threat that has catalyzed US-led efforts to establish an international price cap on Russian oil – a perhaps counterintuitive ambition to avoid the consequences of an all-out ban while still limiting Russian revenue or, alternatively, to backtrack on a sanctions plan more ambitious than popular resolve and capacity in the West.

Moscow could theoretically try to get around Europe’s sanctions by using its own tankers. But because Russia has long relied on foreign shipping to transport its oil, its capacity to do so on its own is limited. Russian oil exporter Rosneft has now moved into chartering tankers, while there has been a recent buying frenzy for ice-breaking oil tankers. Russian government officials estimate they’d need to grow the national tanker fleet fourfold to redirect the country’s oil to Asian buyers, according to Kennedy. Plus, there’s the question of whether Russia even wants to evade Europe’s ban: Moscow seems to be reveling in turning the screws on Europe’s energy supply; why switch tacks now?

Plus, a slew of natural-gas problems

It’s been a busy week of natural gas news. First off, China—which had been making handsome profits rerouting US LNG to Europe—is now cutting back on such resales to ensure enough domestic supply for the winter. That will tighten the global LNG market (though perhaps not dramatically, as analysts expect China to stay out of the spot market) just as Europe enters winter with no certainty that it can avoid a severe energy crunch, even with EU natural gas storage levels now above 93%.

And at a time when Europe needs all the energy it can get, bloc-wide natural gas production in the second quarter was down 3% year-on-year, according to the European Commission’s gas market report released this week (pdf, p.9). Production slump aside, there’s another bottleneck: regassification capacity. As Reuters reported this week, dozens of LNG tankers are languishing off Europe’s coasts because they lack slots to unload and regassify the chilled fuel. And that’s not the all of it. EU imports of Russian LNG have risen by 50% in the first nine months of the year, even as piped gas imports have fallen. That means Europe is fueling the Russian war machine with LNG purchases, not producing enough of its own gas, and not building LNG terminals quickly enough to use the gas it has bought.

In an effort to address this matrix of problems, the EU this week unveiled a series of interim measures meant to address gas prices, including a proposed emergency gas price cap on the benchmark Dutch TTF contract that would only be implemented if certain conditions are met. Yet the proposal—which appears to be designed to find a middle ground between the 15 EU countries that want a hard price cap and Germany and the Netherlands, who are opposed to one—may end up pleasing no-one.

Copper prices slip. But should they?

With global macroeconomic activity slowing, copper prices continue to tumble, to the tune of some 30 percent over the past twelve months. For the metal, it’s a perfect storm of concerns about US monetary tightening and a strong USD, China’s Zero COVID economy, and Europe’s energy squeeze. For copper companies, it’s a tough set of Q3 figures: Miner Freeport-McMoRan’s Q3 profits declined over 70 percent compared to last year’s third quarter.

But this drop could be a false flag; a function of market perception not reality. According to the world’s largest publicly-traded copper producer, Freeport, the copper market remains “strikingly tight,” characterized by high demand and shrinking inventories at near-historical lows. If that’s right, the mismatch between markets and reality could threaten future supply: Sliding prices at a time of tight supply would disincentivize necessary in new investments in copper mining, processing, and relevant technologies.

The German government is debating whether to let the Chinese shipping conglomerate COSCO take a 35% stake in Tollerrot, a container port in Hamburg. The economy ministry says the port is “critical infrastructure” and shouldn’t be controlled by foreign rivals; the foreign, defense, and interior ministries are also against the sale. However, Chancellor Olaf Scholz and several ministries want the transaction to go ahead.

This debate’s implications go beyond the future of the Hamburg Port. This is a litmus test for the next act in German governmental attitudes toward China: The past months have seen an unprecedented degree of hawkishness on the part of German leaders vis-à-vis Beijing. Is that all rhetoric? Or is Berlin’s China policy pulling a u-turn?

Elsewhere, China is expanding its global logistics network with a new rail link connecting landlocked western China to Myanmar, opening up a vital overland route to the Indian Ocean. Various projects are currently underway to build or study the possibility of constructing more rail links, including a 330km railway between the Chinese cities of Dali to Ruili, and a railway between the Myanmar town of Muse across the border from Ruili to Mandaly and potentially all the way to Kyaukphyu, a special economic zone on the Indian Ocean. Success is far from guaranteed for these projects. But pulling them off would give China access to a strategic overland route and boost Myanmar’s role as a logistics hub at a time when its military government faces growing international isolation. 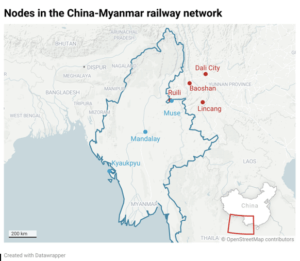 Japan’s currency slid past the key 150 yen per dollar level this week for the first time since 1990—then rebounded as much as 2.7% on Friday on news that the Japanese central bank had intervened in the FX market. But the yen is still down steeply against the soaring dollar this year, and pressure remains on authorities more forcefully to defend the currency. The heavily energy import dependent country is already racking up large bills thanks to the global energy crisis; its rapidly declining currency is only swelling the import bill.

For now, the Bank of Japan is expected maintain its lonely, dovish stance when it meets next week, keeping rates ultra-low in part because policymakers want to see evidence of healthy, sustained inflation. That’s despite inflation having already exceeded the central bank’s 2% target for six straight months: Latest data show Japan’s CPI rising 3% in September from a year earlier to an eight-year high. Still, prime minister Fumio Kishida is determined to stick with his bet on inflation-sparking stimulus. That may end up being the prudent choice, even at the expense of short-term currency pain: An abrupt policy reversal now could shock markets, as the UK learned the hard way. 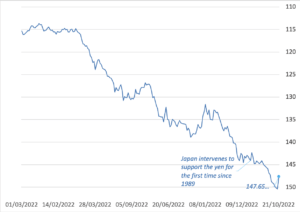 Climate, Covid, and conflict are all exacerbating the global food crisis. The World Food Program estimates that a record 970,000 people are facing “catastrophic” levels of hunger, warning that failure to act now risks creating situations that “outstrip WFP’s or any organization’s ability to respond.” Meanwhile, the IMF noted last month that the world’s food crisis is “at least equal to the 2007–08 crisis that left many countries with severe undersupply of food and caused large suffering and a high number of deaths.”

In addition to supply shocks, the dollar shock is also disrupting food markets. High interest rates and the soaring greenback have crimped import-reliant countries’ abilities to buy food. Ghana, whose currency is the second-worst performing in the world this year against the dollar, has been particularly hard hit. Pakistan is in a tough spot, too: Its currency has sunk some 20% against the dollar this year, just as its import reliance on food has increased due to floods that destroyed domestic crops. And Haiti is perhaps the most urgent case of all, with a humanitarian catastrophe unfurling rapidly, as mass hunger, fuel and water shortages, gang violence, and a cholera outbreak push the country to breaking point.

The lettuce has outlived Liz Truss. (For those less attuned to the intricacies of British politics, the tabloid Daily Star had set up a livestream on Oct. 14 positioned next to a portrait of Truss; as of Oct. 20, Truss’s political career was officially declared to have had a shorter shelf-life than the leafy vegetable.) In the end, firing Kwasi Kwarteng didn’t save her. Nor did executing the mother of all economic U-turns, reversing 32 billion GBP of what would have been 45 billion GBP in unfunded tax cuts.

The next occupant of No. 10 Downing Street—who is set to take office by Oct. 28—will have to contend with the grim reality of high borrowing costs, high energy bills, high inflation, high taxes, and a high-wire act of balancing difficult trade-offs in a bid to rescue the country from prolonged economic misery.