A deep dive into Europe’s energy crisis shows faltering industry and political fault-lines, no end in sight for Moscow’s economic warfare, and Beijing as the real winner – plus Europe intent on doubling down on its own mistakes. In markets, a weak currency could strengthen China’s hand, elsewhere it’s hikes hikes hikes, and will India join a major global bond index?

Up goes gas, down go euros: Whither Europe?

The doomsday scenario that Europe has been bracing for (and we have been warning about) for months, has come to pass: Russia has indefinitely halted gas supplies and Europe is in energy crisis. Benchmark gas futures surged this week, cutting short last week’s retreat. The euro slumped to a 20-year low of 0.988 USD. And even as Gazprom blames pipeline maintenance issues, the Kremlin has made clear that the energy supply cut is retribution against Western sanctions, economic warfare pure and simple. Plus, Moscow has more tricks up its sleeve: The Kremlin said this week it will retaliate over the G7’s price cap on Russian oil by stopping energy exports to Europe and scuttering the UN-brokered grain deal.

Europe’s energy squeeze could leave a whole lot of households cold this winter. And its consequences for industry are already being felt: German chemicals giant BASF has warned that it could further cut back production over uncertain gas supplies and volatile prices. France’s largest aluminum smelter said this week it would cut production by 22 percent as energy costs rise. This industrial belt-tightening risks compounding Europe’s overall supply shortage, and that of the world.

None of this is great news for the political future of the bloc. And Europe has no real response, beyond palliative care. Governments including Germany, Finland, and Sweden have rolled out multi-billion euro relief packages to help households with ballooning power bills; EU energy ministers this week discussed taking dramatic steps to intervene in power markets, including a levy on fossil fuel producers, a cap on excess revenues of power generators using non-gas fuels, a price cap on Russian gas, and sweeping powers over businesses. But all of these are band-aid measures. They cannot address the fundamental issue of dependence on Russian resources. And as long as Europe depends on Russian fuels, Moscow is in the cat bird seat. 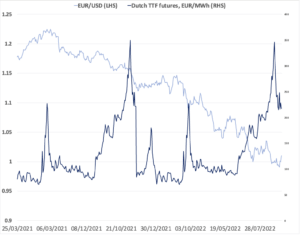 The stakes are high. The energy crunch could spiral into a bloc-wide fracturing—exactly what Putin wants to see. For a hint at that risk, look to the mass protests in the Czech capital of Prague against the government, EU, and NATO. What happens if such discontent escalates? Meanwhile, the real winner in all of this? China. (Read on!)

No pain no gain…for China

If Russia is the direct spoiler, it might be China that stands most to gain from Europe’s pain: Beijing benefits as much as Moscow from a fractured West. Plus, while economic warfare might come at a price for Russia, it’s bringing profit to China: The country’s energy majors are diverting LNG from the domestic market to buyers around the world, including Europe, making handsome profits on the arbitrage and growing their footholds in the EU market. 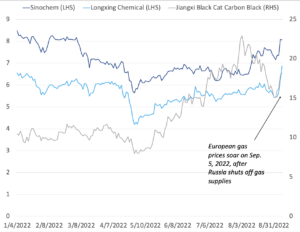 Even as energy squeeze challenges Europe’s future, governments within the bloc seemed not to have learned their lesson. Berlin’s economy minister issued a recommendation this week to stick with its plans to take the country’s three remaining nuclear reactors offline by year end. Of those, two will remain on standby to act as an “emergency reserve” if necessary. This is a curious move considering that Germany is in an emergency now and needs all the energy it can get. But the German economy minister appears intent on solving a supply problem from the demand end: He has said that he sees no need to extend the nuclear plants’ operations, pointing instead to a levy on power producers to redistribute profits and shield consumers from stratospheric power bills.

Germany’s energy quandary is in large part a problem of its own making – or at least compounding. Over recent decades, Germany has gradually increased its reliance on Russian energy while decreasing supply of alternatives, like nuclear. Today’s crisis should be a wake up call. But it seems that some are sound sleepers.

The US soybean lead is dwindling. Up until recently, it was about twice as expensive for China, the world’s top soybean importer, to procure soybeans from Brazil than from the United States. But now, a strong dollar, US logistics issues, and advances in South America’s infrastructure, are eating away at that difference: According to recently released US Department of Agriculture data, it now costs approximately the same amount for a Chinese buyer to transport Brazilian versus US soybeans. This could be the canary in the coal mine of what a strong dollar means for American exports. It is also the latest example of long-term underinvestment in US infrastructure coming to a head – and a compelling counterfactual: The Brazilian federal government has invested some 60 billion USD in roads and maritime gateways since 2008.

Is the US dollar strong or the RMB weak? Yes.

The Chinese RMB has weakened to two-year low, edging ever closer to the 7 USD mark. On Thursday, the RMB hit 6.965 to the dollar, according to Sentieo. In part, this is a function of the strengthening dollar, buoyed by US Fed tightening. For Chinese exporters, a cheaper RMB could be a boon: It makes their goods more price competitive. (Remember that the last time the RMB crossed the 7 USD mark was at the peak of the trade war in 2019.) But a weak RMB also makes Chinese imports of raw materials and commodities more expensive, which will affect new long-term supply contracts. And China’s worsening economic outlook will put further downward pressure on its currency; trade data this week was disappointing, with both exports and imports missing forecasts by a wide margin (though the RMB has so far held up relatively well against a trade-weighted basket of currencies).

The two big questions: First, does Beijing see the China-Russia axis, and access to relatively low-cost commodities that it provides, as a hedge against the import costs imposed by a weaker currency? Second, what are the implications of a soft RMB for emerging markets? Some may be doubly squeezed by the strong dollar—which can add to debt pressures and make imports more expensive—and the weak RMB, which tempers the competitiveness of nations that compete directly with Chinese exports.

Chinese RMB per US dollar 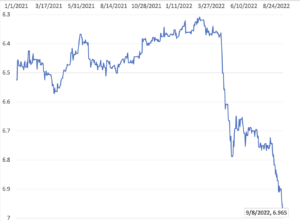 And adding more pressure to the RMB and emerging market economies: Additional hikes. On Wednesday, the Bank of Canada implemented a 75 basis point interest rate hike to bring the benchmark rate to 3.25 percent, its fourth consecutive such move. This makes Canada’s the highest policy rate among major advanced economies. The next day, the European Central Bank made the biggest interest rate hike in its 24-year history, raising key rates by 75 basis points. And US Fed chairman Jerome Powell continued to signal that he is “strongly committed” to taming inflation, pledging on Thursday further to raise rates until prices come down. Analysts now expect the Fed to make another 75-basis-point hike later this month.

Can the US central bank engineer a soft landing? The path is narrow, but Powell thinks there’s still a chance—and so does Goldman Sachs. For the rest of the world, the consequences of a strengthening dollar will take time to play out fully. And those consequences might break with the norm: In a novel pattern, the USD is appreciating more against the units of other rich economies than it is against emerging markets. Why? Generally, when the Fed raises rates, investors pull out of higher risk developing economies. But today, the developed world has its own risks. Think rate hikes across rich economies; energy crises in Europe and Japan; and housing market pressures in Australia, Canada, and New Zealand.

JPMorgan’s emerging markets bond index may soon welcome a new member. With Russia’s exclusion from the index following its invasion of Ukraine, India is expected to take its place, according to Morgan Stanley and Goldman Sachs. That will make it easier for global investors to tap into high-yield Indian sovereign bonds. It could bring inflows of 30 billion USD to the biggest emerging economy bond market. The move would also help diversify the JPMorgan’s Government Bond Index – Emerging Markets Global Diversified (GBI-EM), which Morgan Stanley notes has become less balanced since Russia, previously with a weight of 8 percent in the index, was removed.

With Liz Truss 10 Downing Street’s newest occupant, Britain welcomes its fourth prime minister in the six years since it voted to leave the European Union. (She is also the 15th prime minister the late Queen Elizabeth II appointed during her seven-decade reign.) Truss takes the reins amid a crisis of crises: Double-digit inflation, soaring energy bills that could wipe out tens of thousands of businesses, a possible winter fuel crunch, chronic labor shortages and worker strikes, a plummeting pound sterling, and a slowing economy on the brink of recession. All that means a good dose of pain ahead. Now it’s up to her to decide how to tackle those challenges—and she’s likely to face a full menu of hard choices. Among them: how to square her small-state, free-market stance with the numerous crises that demand big-state actions. 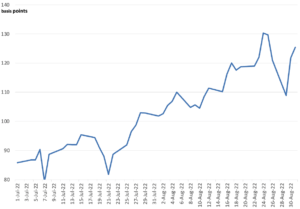 No chill in California…

Strained by days of record high temperatures and a corresponding spike in energy demand as people crank up air conditioners, the California grid only narrowly avoided blackouts on Tuesday thanks to last-minute conservation efforts by citizens prompted by an emergency text alert. But blistering temperatures are continuing to pressure the power grid, highlighting how vulnerable existing infrastructure is to extreme weather as the state transitions to renewable energy. A historic drought is making matters worse by crimping hydroelectric power production and heightening the risk of devastating wildfires. Fortunately, the latter part of the week brought some relief from the heat. But heat waves and cold snaps will only become more frequent and intense, further highlighting the vulnerabilities accumulated from years of underinvestment in modernizing the power sector.

…Or in oil markets, for that matter

It’s not just Europe that’s bringing chaos to the energy table. Wildcards remain in the oil market. On Monday, OPEC+ decided on a small oil production cut of 100,000 barrels per day for October. This was largely a symbolic move: 100,000 barrels is just a small fraction of the 43.8 million the group aims to pump daily. Still, oil prices jumped on Monday before paring back the next day. And there are other wildcards in play, too. The EU’s chief diplomat warned on Monday that the Iran nuclear deal is “in danger;” should negotiations collapse, Iranian crude would continue to be barred from international markets.

2022-09-25T14:20:31-04:00#economic warfare #Energy #Europe #Russia-China |
FacebookTwitterEmailPrint this page
Force Distance Times Dispatch
Subscribe to the Force Distance Times weekly newsletter to keep up to date on our latest commentary
We respect your privacy