The global economy is overheating – and not figuratively. China is facing devastating heatwave and drought. Record-breaking temperatures are forcing factories in Sichuan to shut down in order to save power. Reservoir levels are dropping, crimping electricity generation levels at hydropower plants, just as air conditioning demand is spiking. Factory shutdowns are hitting major firms like CATL and Toyota. Tongwei, the world’s largest polysilicon supplier, has suspended production; key Tesla auto parts suppliers have been hit. Up to a quarter of China’s lithium production capacity could be impacted, according to one estimate. Plus, crops and livestock around the Yangtze River basin are also at risk. And the already weeks-long heatwave is forecast to last at least another two weeks. This is just the latest disruption to China’s manufacturing, and therefore that of the world. On Thursday, Nomura slashed its China growth projection from 3.3 percent to 2.8, citing COVID resurgence and the heat wave. The consequences will reverberate internationally: When the wings of the Chinese economic butterfly flutter, the world shuts down. Right, now, the butterfly has heat stroke.

Plus, China’s not the only one running a high temperature. In Europe, heatwave and drought are further stressing the continent’s already rough economic outlook. Water levels at a key chokepoint on the River Rhine have fallen towards the critically low level of 30cm, disrupting as much as 400,000 barrels a day of oil barge trade. This is the last thing that an energy-squeezed Europe needs. Natural gas prices were already sky high; now, with oil transport disrupted, they are climbing  even higher as users switch fuels. And remember how Germany had turned to coal to replace lost Russian gas? Well, that coal can’t even make it to power plants because of the shallow river waters. The Danube – critical for grain and vegetable oil shipments as Ukraine’s deep water ports remain unpredictable due to Russia’s blockades – is drying up, too, with water levels so low that large vessels can no longer reach river ports. 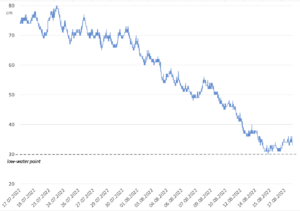 These weather trends are compounding the already-inflationary forces destabilizing the global economy: Low economic output in China stemming from COVID Zero policies and a European energy squeeze stemming from Russia’s invasion of Ukraine. They’ll further dampen economic activity in China, a critical engine of the global economy, and Europe, one of the most vulnerable nodes within it. And in doing all of this, this wave of heat waves will bring new pressure to international energy markets and supply chains.

China unexpectedly cut two key rates this week, barely a week after central bank authorities hinted strongly that monetary easing would not be on the table. Why the sudden about face? Disappointing economic data seems to be the key reason: Retail sales, industrial production, and fixed asset investment for July all missed forecasts, youth unemployment has hit a record 19.9 percent, and home sales were down 28.6 percent. Meanwhile, bank loans for July were less than a quarter of June’s amount, a clear sign of weak domestic demand. More rate cuts are likely; the loan prime rate could be lowered as early as this coming week. Whether looser monetary policy will spur economic growth is another matter. Plus, what will growing divergence between Chinese monetary policy and those of major central banks worldwide—including, most importantly, the US Fed, whose officials are sending mixed signals about a September hike—mean for the RMB and capital flows? 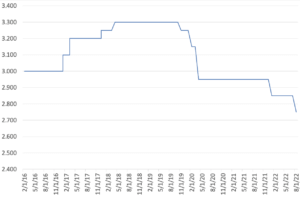 US president Joe Biden signed the Inflation Reduction Act (IRA) into law on Tuesday, precisely one week after he signed the CHIPS Act. The IRA packs in 750 billion USD in health care, tax, and climate measures. Though it is significantly trimmed down from the original 1.75 trillion USD Build Back Better plan, Biden has hailed the package as one of the most significant laws in US history.

Maybe so. The IRA promises a big boost to the renewables sector, announcing America’s grand entrance to the global new energy race—one that up to this point China has been largely running solo. Longer term tax credits for wind and solar should help the domestic industry plan investments with greater certainty. Tax credits for clean hydrogen should spur that sector, too.  But the big question: Will this work? Will it actually encourage development of new, responsible, trusted supply? Or will it feed additional, inflationary capital into shoring up a flawed system of industrial dependence and offshored harm? There are positive indicators, like Manchin’s domestic sourcing requirements for the 7,500 EV tax credit. There are also danger signals: Within hours of the IRA passing with that tax credit, Ford raised the price of its electric F-150 by up to 8,500 USD. Moreover, as we pointed out last week, the government’s 750 billion USD clarion call is just the first step. The private sector, including carmakers and critical minerals players, must respond with proactive investment in domestic production, too.

Is Made in Vietnam the new Made in China? Ask Apple

Nikkei Asia reported this week that Apple is working on shifting some production of Apple Watches and MacBooks to Vietnam for the first time. It’s the latest move by Apple to diversify its production from China, where unpredictable pandemic lockdowns have thrown supply chains into disarray. While Vietnam is already Apple’s most important ex-China production hub, manufacturing watches and laptops would represent a step up in technical and supply chain complexity.

Apple isn’t the only company moving in this direction. Samsung has relocated its Chinese display production to Vietnam; now, it is investing billions of dollars to do the same with semiconductor components. The stakes are high for Vietnam: The company is eager to position itself as a high-tech manufacturing destination for global companies. If it can deliver on the needs of giants like Apple and Samsung, more tech giants will likely follow, propelling Vietnam’s capacity forward. And stakes are high for global firms, too: After so many years of outsourcing manufacturing to China, will they be able meaningfully to diversify while keeping costs and quality in check? Keep in mind, too, that shifting manufacturing out of China is only one part of the equation. Companies continue to rely on China for upstream inputs and midstream processing; this allows Beijing to maintain a vice grip on downstream manufacturing, even as it moves beyond Chinese borders.

The UK’s doom loop of inflation and discontent

Inflation in the UK shows no sign of letting up: It recorded a 40-year high of 10.1 percent in July, exceeding the already blistering paces of CPI increases in the US and across Europe. And worse may still come: Compounding factors are further pushing up natural gas prices; this is likely to drive UK inflation as high as 13.3 percent in October. These soaring costs are threatening the viability of many small businesses. Transport worker strikes on railways, buses, and at ports over a cost-of-living crisis will bring more supply chain disruptions. Both will drive prices up more in a doom loop of inflation and discontent. None of this is helped by the fact that the UK government is essentially in limbo – just as the country faces economic crisis that demands swift and decisive action. 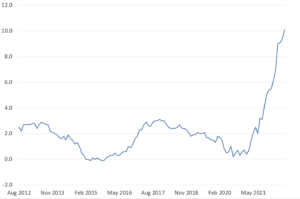 Recent weeks have seen two high-profile takeover bid rejections in the mining industry: Australian copper miner Oz Minerals turned its nose up at BHP’s 5.8 billion USD offer earlier this month, while Canada-listed Turquoise Hill, which holds a majority stake in a Mongolian copper-gold mining project, this week rebuffed Rio Tinto’s 2.7 billion USD buyout offer. Both bids were made amid falling copper prices. Both were rejected as opportunistic. These takeover rejections reflect bullish pricing projection for copper based on its tricky supply prospects and near-guaranteed demand. That calculus is especially sound considering the fact that 51 percent of new copper mine output between 2012 to 2021 came from the Democratic Republic of Congo and Peru – two countries where political risks complicate business plans.

Oil prices dip, but we’re not making any calls

Oil prices dipped earlier this week to six-month lows, thanks in large part to disappointing economic data from China and the US. But prices jumped again on news of a larger-than-expected fall in US gasoline and oil stockpiles, indicating that demand is still robust. A couple factors on the horizon could help ease additional upward pressures on oil prices: First, on August 14, Saudi Aramco said plans to boost its sustainable production capacity. Second, new progress on a potential Iran nuclear deal could ease sanctions on Tehran and allow it to significantly ramp up oil sales. But this is an area where we’re not going to make predictions. If there is one thing we know for sure, it’s that a new wildcard could come into play any day, causing oil prices to surge or plunge.

China’s refinery crude throughput has fallen to its lowest since March 2020, hampered by outages at state-run refineries and decreased operations by independent refiners as margins have narrowed. In parallel, Chinese refined fuel exports are expected to fall to their lowest level in seven years as the government has slashed export quotas to secure domestic supplies. Beijing’s focus on energy security comes at a cost: It means that Chinese producers have been missing out on the record-high margins of a bumper export market. It has also meant that the global market – including countries facing crippling fuel shortages – cannot count on China for any kind of supply relief. The plus side, though: India and South Korea will likely benefit from the decrease in Chinese exports of gasoline, diesel, and jet fuel.

Both Russia and Ukraine are warning about a possible attack on the Zaporizhzhia nuclear power plant in southeastern Ukraine; nearby residents are fleeing as fears of nuclear catastrophe grow. The plant is under Russian control and has been since March. Ukrainian intelligence announced that Russia sent plant workers home on Friday, a sign that it might be planning an imminent attack. This isn’t the first time that alarm bells have been rung over the Zaporizhzhia plant. In March, Russian projectiles set fire to part of the complex. Since then, Ukraine has accused Russia of continuing to bombard the facility – while Putin has accused Ukraine of doing the shelling, part of a “false flag” campaign to stoke fear in the international community.