Beijing plays both sides of today’s energy war, establishing itself as an arbiter in today’s energy markets while at the same time expanding its influence over tomorrow’s. Meanwhile, shipping costs promise new pressure on energy prices; European industry falters and the UK falters, generally; the Fed ups the ante but Beijing and Tokyo continue to sit this round out; and is copper the bargain of the moment?

China is playing both sides of the energy game, and Europe is caught in the middle

While Europe continues to struggle with soaring energy prices, China is snapping up record quantities of Russian energy products – and driving a hard bargain while at it. In August, China spent a record 8.3 billion USD on Russian crude, oil products, gas, and coal, up 68 percent from a year ago, according to Chinese customs data. The increase is particularly striking given China’s muted current energy demand and the reality that these energy purchases are being conducted at discount rates. And the trend is poised only to accelerate: Russia is likely to increase its energy shipments to China in the months ahead as Europe tightens its sanctions.

In short, Beijing is benefiting handsomely from the current energy stand-off between Russia and the West – not only by claiming large quantities of Russian energy resources at relatively low cost, but also, in the process, by positioning itself as an arbiter of today’s global energy market.

Chinese exports of solar panels to the EU, by value 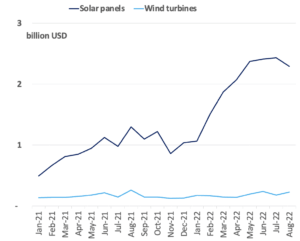 At the same time, Beijing may also be expanding its influence over tomorrow’s energy market: As Europe looks to speed its shift to renewable energy sources, in order to cut reliance on both fossil fuels and Russia, it is turning to Chinese production. China’s exports of solar panels to Europe in the first eight months of this year have more than doubled in value compared to the same period last year. Both EU demand and Chinese supply are poised only to increase moving forward. On the demand side, next week, the bloc is expected to unveil a 565 billion euro (556 billion USD) plan to electrify its grid, including by massively expanding solar panel coverage. On the supply side, Chinese PV manufacturers look ready to ramp up production: Chinese companies Jinko Solar and Tongwei this week signed a 103 billion RMB long-term polysilicon supply deal, reportedly the largest silicon supply deal ever, just weeks after signing a separate major supply contract last month.

Global shipping costs are ballooning. Except this time, the culprit is not container freight rates, but rather  those for shipping essential fuels worldwide. While the benchmark Shanghai-Los Angeles container shipping rate has fallen steeply, tanker freight rates for LNG, diesel, and crude are spiking.

The main culprit is a supply crunch. Thanks to the disruption in the international energy market caused by the Russia-Ukraine war, ships are having to transport fuels a greater distance, keeping them occupied for longer and pushing up rates. First and most obviously, European countries are replacing Russian supplies with more distant ones. Moreover, Russian fuels spurned by Europe now have to be shipped farther to Asian buyers. For example, Gazprom’s first LNG shipment from its new Portovya plant appears to be headed straight for India. Another contributing factor: China’s plans to boost crude refining rates, which will add to global supplies and ease fuel prices, but also push up supertanker freight rates as China imports more crude feedstock from the US Gulf and the Middle East.

This creates a potential energy threat for even those Asian economies that are retaining access to Russian sources: While they may benefit from buying Russian energy supplies at a discount, the tight spot market and the rally in tanker freight rates could put them in a bind if winter turns out to be colder than expected. And Japan is already forecasting a frigid winter, which will further squeeze global LNG supplies.

German industry notched a record rise in producer prices of industrial products, with an increase of 46 percent in August from the same period last year. This spike is driven in large part by energy prices, which are up 139 percent from last year. Factories in the country – and in the bloc more broadly – are being forced to cut production; in an emergency move, Berlin is nationalizing German gas giant Uniper as the energy squeeze threatens to push it out of business. 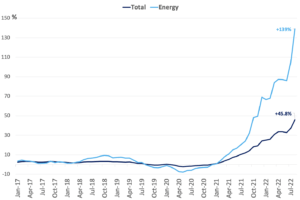 Copper prices have slumped, driven by shrinking demand for the metal in energy-crisis-riven Europe. But don’t let the current blip of sliding prices detract from the enduring reality of a massive copper crunch in coming years, as the global electrification push turbocharges demand for the commodity. In fact, the downturn in prices could stunt much-needed mine investments, worsening the supply shortfall—which, in turn, will eventually drive prices up.

That’s already happening in the red-hot lithium market: According to Benchmark Mineral Intelligence, the global weighted average price of lithium carbonate has more than quadrupled over the last year, driven by China’s booming EV sales and earlier supply disruptions from the heatwave in Sichuan. This will push up EV makers’ input costs – at a time when EV prices are already increasing at a quicker clip than those of conventional automobiles. 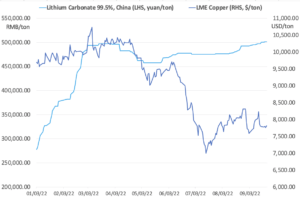 Another rate hike from the US Fed

The US Federal Reserve has raised rates again in the fifth hike this year, and the third consecutive 75 basis point raise. The message from Fed chair Jerome Powell is clear: Inflation must be defeated, and there is no painless way to do it. So much for hopes of a soft landing. Stock markets got the memo, leading to a volatile day of trading on Wednesday and rough week overall.

The consequences of the Fed’s hikes extend well beyond the US. Central banks worldwide are finding themselves forced to protect their currencies against the surging dollar, while battling surging inflation. This week alone, both Sweden and Vietnam announced 100bps increases while Switzerland went for 75 bps and Indonesia, Norway, and the UK opted for 50bps hikes. In Asia, Hong Kong fared particularly badly: The local monetary authority was forced to match the Fed’s 75bps raise to defend its currency’s dollar peg, pummeling the already-weak economy and sending the Hang Seng index to close to its lowest in over a decade.

But Japan and China sit this round out

Two countries are absent from the rate hike trend: Japan and China. In Japan, headline inflation has hit a whopping….3 percent. That’s near an eight-year-high for the country, which has seen chronic deflation for three decades. And the Bank of Japan wants more price increases: Its governor Haruhiko Kuroda says he will only raise rates when there is robust wage growth to underpin sustainable inflation. That explains why the central bank stuck with ultra-low rates this week and says it will continue to do so “for some time,” even as its peers globally embark on aggressive monetary tightening. The divergence has further weakened the yen, which has fallen 20 percent against the dollar this year. That said, Tokyo has drawn a line in the sand: Hours after the Fed’s interest rate decision, the Bank of Japan intervened in the currency market for the first time since 1998, selling dollars and buying yen to stem the currency’s slide. Still, as long as Japan remains a dovish outlier, gravity may yet pull the yen lower.

China is more of a puzzle. The RMB is sitting at its weakest level since the early days of the COVID-19 pandemic, above seven to the USD. But the People’s Bank of China is sitting this round of hikes out, despite an entire arsenal of tools at its disposal. The official explanation: Respect for markets. What’s the real story?

On Friday, Liz Truss’s government in the UK announced a new “plan for growth,” a £220 billion medley of tax cuts, energy subsidies, and deregulation. London called this a means of turbo-charging growth. Markets did not agree. The pound sterling promptly fell below 1.09 USD, its lowest point since 1985. Yields on British government bonds soared by the most in a day in over three decades. Commentators criticized the package as “reckless…fiscally and politically,” “toxic…and…dubious,” “unsustainable,” and “casino economics.”

This stunning market reaction was a vote of no confidence in the UK chancellor. The combination of falling pound and traders pricing in additional interest rates is a reaction generally only seen in emerging market currencies. But if you’re looking for a bright spot amid the gloom, former IMF chief Olivier Blanchard is here for you: “We are lucky that the UK is not in the euro…Otherwise, we would be facing another euro crisis.”

South Korea isn’t pleased with the Inflation Reduction Act, and it’s making its displeasure known. The recently signed US legislation provides tax credits of up to 7,500 USD for electric vehicles that satisfy domestic sourcing rules: At least 40 percent of critical minerals used in EV batteries must be sourced from the US or a free trade partner by 2024, with that figure ramping up progressively to 80 percent by 2027.

This has caused furor in Seoul, whose trade minister says the IRA discriminates against his country’s companies: Hyundai EVs assembled in South Korea will be excluded from the IRA credits. The sting is all the greater because Hyundai announced just months before the passage of the IRA that it would invest 10 billion USD in the US by 2025, including for battery and EV manufacturing. But EVs made at the company’s Georgia plant won’t qualify for IRA credits either, as production there isn’t scheduled to begin until 2025. (Of course, in the immediate term, not many other EV firms will qualify for the credits either, but that seems to be cold comfort for Hyundai.)

South Korea’s president Yoon Suk-yeo managed to speak with Joe Biden very briefly in New York this week, and may have pressed the tax credits issue. But it’s not clear if there’s a quick resolution to the issue, if any at all: The IRA is now law; the White House has limited ability to make changes and exemptions.

Italians head to the polls on Sunday for a parliamentary election that will determine the next national government. So far, polling suggests a strong rightward swing: A coalition between Matteo Salvini’s League and Silvio Berlusconi’s Forza Italia party could net over 60 percent of parliamentary seats, and the far-right Giorgia Meloni of the Brothers of Italy Party (FdI) could become the nation’s first female prime minister since World War II. That said, the League has recently come under intense fire for its close Kremlin ties. It may well underperform what the last pre-blackout poll on September 9 suggests. Much hangs in the balance: the results of the vote will affect the trajectory of the country, the EU, and NATO.