The big headline this week: Inflation figures show rates rising to 8.5 percent for the year, their steepest climb since 1981. Energy in particular is driving the trend, with gas prices up 50 percent year over year. But close on its heels is food. And that’s a global problem — that every indication suggests is only going to get worse: Food prices are setting records across the world as the Russia-Ukraine war roils crop supplies. The UN Food and Agriculture Organization (FAO)’s food price index was up 13% in March vice February, hitting its highest point since the index’s inception in 1990.

The biggest price increases are in cooking oils and cereal: Russia and Ukraine are the world’s second and third largest exporters respectively of cereals, and the seventh and third largest exporters respectively of edible oils. This situation is likely only to worsen. The planting season for the 2023/24 market year starts in September. Even if fighting has ceased by then, Ukrainian farmers will still face numerous hurdles to a successful harvest, including mine-laden fields, destroyed equipment and port facilities, and a shrunk workforce. 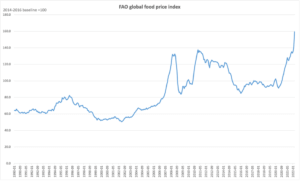 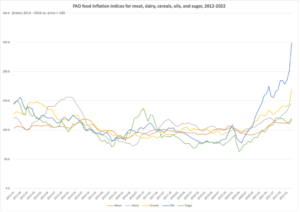 Disruptions in food supply risk catalyzing an escalating set of second and third order effects. Countries and populations where food is already a sizable part of household expenditures will feel the squeeze of rising prices hardest. This risks increasing the likelihood of political and social instability.  Moreover, food and fuel prices are tightly intertwined. Their twin rises are likely to compound each other. Moreover, actions taken to mediate one may exacerbate—or at least leave unsolved—the other. Take for example the White House’s move to temporarily allow the sale of gasoline with a higher ethanol blend. While this might help consumers lower fuel costs, at least at the margins, it could also further inflate grain prices.

Titanium crunch: Where to Go After Russia?

Food is not the only resource being crunched by Russia’s offensive in Ukraine. Critical minerals also face major disruption: Russia accounts for some 14% of the world’s total mineral production — including some 15-20 percent of global titanium output. Titanium is a crucial input for the aerospace industry, as well as for naval purposes, armor, and medical devices. Now, plane makers are facing a reckoning. Boeing has decided to terminate its relationship with Russian titanium supplier VSMPO-Avisma over concerns that sanctions concerns; Airbus is maintaining its relationship to Russia and urging the EU to hold off on sanctioning the industry, but also claims to be looking for alternate suppliers. 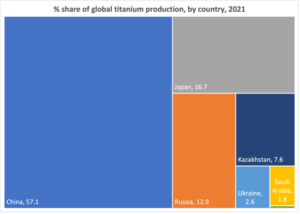 Both plane makers say they have enough titanium supplies – for now. But it’s not just a question of whether they have enough supply, or even of whether they can find alternative suppliers. It’s also a matter of who they turn to. Japan, the world’s second biggest titanium producer, is ramping up output. Yet the world’s largest titanium player, with a 57 percent share of global production, is China. And turning away from Russia hardly makes sense if it means increasing reliance on China: What happens if the F-35 becomes dependent on Chinese titanium?

Elon Musk has had plenty of press attention this week. But very little of it for what could be one of his most consequential recent moves. As lithium carbonate prices soar – to the tune of nearly 500% in the past year – EV makers like Tesla and Nio are raising prices to compensate for lower profit margins. Now, Tesla is signaling it might want to take matters into its own hands, and via at least a semblance of vertical, upstream integration: Musk tweeted last weekend that “Tesla might actually have to get into the mining & refining directly at scale, unless costs improve.” With raw materials now accounting for 80% of the cost of a lithium battery, up from 40% in 2015, Musk is decidedly onto something. That said, investment in upstream assets, including mining assets, is decidedly not the norm for US players. And while this Tweet might be more Musk bravado than action, it signals a real change in how major US companies think about their relationship to upstream supply. That change is clearly driven by the dawning, inescapable reality that in today’s industrial landscape, material batters: Over the past decade, cobalt prices have increased by 3x and lithium prices by a whopping 28x. Car companies simply can’t afford to rely on outsourced supply. Regardless, Tesla’s news was not particularly well received by investors in Chinese lithium miners. Ganfeng Lithium, which has a contract to supply Tesla with lithium products through 2024, slumped as much as 15% on Monday following Musk’s tweet.

2022-09-26T12:42:42-04:00#agriculture #EVs #inflation #titanium |
FacebookTwitterEmailPrint this page
Force Distance Times Dispatch
Subscribe to the Force Distance Times weekly newsletter to keep up to date on our latest commentary
We respect your privacy