Beijing completes its space station and we benchmark the US-China space race – while in markets the US Fed keeps hiking, the rest of the world feels the heat, and Maersk’s warnings add to recession fears. Plus: The Black Sea grain deal falters as Russia continues to weaponize commodities, Canada orders Chinese lithium companies to divest, and is an OPEC for battery minerals on the horizon?

On Monday October 31, the final module docked at China’s Tiangong space station, completing Beijing’s crewed orbital outpost. The New York Times described the development as “the latest step in Beijing’s effort to surpass the United States in space exploration;” Chinese media trumpeted that “the Tiangong Space Station made China a major force in the space race.”

The Tiangong space station has been in the works since May 2020. It reflects Beijing’s larger ambition to become a space super power, one evident in multiple National Key Science and Technology projects – as well as major recent successes like China’s lunar explorer successfully landing on the “dark” side of the moon in 2019. This week, we worked to understand what the competitive balance in the US-China space race actually looks like, through the lens of the two countries’ relative satellite capacity.

As of August 2021, according to the UCS Satellite Database, the US owned or operated almost six times more satellites in orbit than China: 2,520 to 431. However, parsing that picture in more detail reveals asymmetries within the US and Chinese satellite ecosystems that could undermine the apparent US quantitative advantage – or at least the ability of the US to leverage it. US satellites predominately serve commercial uses and are largely owned, operated, and contracted by a fragmented collection of private sector actors. By contrast, not only do most of China’s satellites serve government or military purposes, but they are also owned, operated, and contracted by a far more consolidated set of players, largely part of or controlled by the Chinese government.

In other words, based on an overall count, the commercial space strength of the United States far exceeds China’s. However, the respective powers’ government and military arsenals sit at relative parity.

The US Fed will keep hiking

The US Federal Reserve raised rates by another 0.75 percentage points on Wednesday, its fourth consecutive raise of the magnitude, bringing the central bank’s benchmark federal-funds to between 3.75 and 4 percent. And more raises are coming. Chairman Jerome Powell said that the pace of hikes may slow, but that ultimately rates will be higher than anticipated. He explicitly quashed dovish hopes, saying it’s “very premature to be thinking about pausing” and that there is still “a ways to go” – while at the same time acknowledging that the path to avoid a recession is narrowing. Those remarks led to a sharp fall in US stocks, with the S&P 500 index down 2.5 percent and the Nasdaq Composite more than 3 percent.

Elsewhere, central banks around the world are under pressure to follow the Fed’s lead. The Bank of England on Thursday raised rates by 0.75 percentage points, the most since 1989, and warned that the British economy could see no growth for two years—which would constitute the UK’s longest recession since the 1930s.

Maersk has a downer forecast for the global economy

Meanwhile, the rapidly shrinking window to a soft landing from the Fed’s aggressive inflation fight is borne out in Maersk’s latest earnings report. The global shipping giant warned of “dark clouds on the horizon” for international shipping demand. And while the company’s revenues in the third quarter still grew 37 percent from a year earlier, that’s largely due to contracted freight rates negotiated earlier in 2022 during peak demand. Maersk is now predicting global container demand to fall by 2 to 4 percent this year, a much gloomier prediction than its previous guidance of minus 1 to plus 1 percent. Like those of FedEx, Maersk’s performance and outlook are typically considered a barometer for global trade and the international economy. Warning signals of a bumpy landing are growing clearer by the week.

The yen is down over 22 percent year to date. It might be down even more had the Japanese central bank not spent a record 42.8 trillion USD to prop up the currency in October alone.

Luckily for Tokyo, it still holds a lot of firepower – to the tune of about 1.2 trillion USD in foreign reserves at the end of September, the second biggest after China. The bulk of those are held as foreign reserves in foreign central banks and the Bank of International Settlements, or as US Treasuries, all of which are easily convertible to cash. And given Japan’s continued commitment to keeping interest rates relatively low, downward pressure on the yen will continue, meaning the central bank will likely have to keep intervening to prop up the currency.

Another factor that’s working in Japan’s favor is its reinstatement last month of visa-free travel for dozens of countries; while visitor numbers are off to a slow start, a gradual recovery in tourism revenues should offer the yen some support.

The Black Sea grain deal hangs by a thread

Last weekend, Russia suspended its participation in the UN-brokered Ukrainian grain export deal following a drone attack on its naval fleet in Crimea that Moscow blamed on Kyiv. On Tuesday, Russia said it would only resume the grain deal if it secured “real guarantees” from Kyiv. The next day, Moscow apparently received those: It announced it would rejoin the grain deal after all, following assurances from Ukraine that it wouldn’t use the Black Sea corridor to attack Russia.

All this has made for a dizzying week for wheat prices: The December wheat contract on the Chicago Board of Trade jumped nearly 6 percent on Monday, before falling over 6 percent on Wednesday. More broadly, Moscow’s moves underline its continuing ability – and willingness – to weaponize commodities to achieve political and military aims, despite (and perhaps encouraged by) ongoing global food crisis. 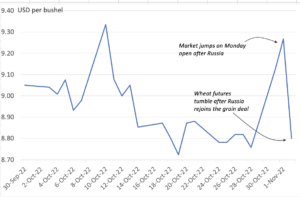 Oil companies are spending on buybacks, not production

After last week’s blockbuster earnings from energy giants including Shell, Exxon, Chevron, and TotalEnergies, BP has followed suit with a bumper 8.2 billion USD profit in the third quarter, doubling from a year earlier and its second highest ever. Investors will be pleased: The company also announced 2.5 billion USD in stock buybacks, which brings total repurchases announced in 2022 to 8.5 billion USD. The White House is less impressed: President Joe Biden this week accused the oil majors of “war profiteering,” and said he wants to impose higher taxes on the companies’ “windfall” profits if they don’t reinvest those earnings in boosting production. Of course, this rhetoric is likely in large part a politically motivated effort to deflect blame for rising energy costs. Regardless, it is unlikely Biden would be able to push a windfall tax through Congress. But the bigger question remains how the government can incentivize more domestic oil production. Stubborn inflation, aggressive Fed rate hikes, and growing fears of a looming recession aren’t helping. Nor is lingering concern that the moment today’s energy crisis calms, the government will once more turn against fossil fuel production.

An OPEC for battery minerals?

Indonesia’s investment minister told the Financial Times this week that his country was looking into setting up an OPEC-style cartel for battery minerals. Those efforts echo discussions in South America, where talk of a “lithium OPEC” among key regional producers like Argentina, Bolivia, and Chile is picking up pace. Telam, Argentina’s national news agency, reported last month that foreign ministers from the three “lithium triangle” countries are in “advanced talks” on a mechanism that would allow them to fix the price of lithium “at a global level.” According to the Brazil’s Rio Times, the foreign ministers believe they could even get Australia on board with the idea.

Whether either of these OPEC emulators will achieve the sort of global pricing influence that the actual OPEC holds is another question. For one, while Argentina, Bolivia, Chile, and Indonesia have significant battery mineral reserves, many of their major projects now depend on investment from Chinese firms. Plus, China holds a 58 percent share of global lithium processing capacity. Does this mean that a lithium OPEC is on the horizon, but it will be under the thumb of Beijing?

This week, signs of brewing political discontent threaten disruption across the international landscape:

In Brazil, a political transition is finally underway as pro-Bolsonaro protests began to fizzle out over his defeat by Luiz Inacio Lula da Silva in the closely contested presidential election. But even as the far-right incumbent Jair Bolsonaro authorized his staff to begin the transition process, he has still not conceded defeat.

In Pakistan, former president Imran Khan was shot in the leg during a political rally, in what his party has called an assassination attempt. Khan himself has accused president Shehbaz Sharif of orchestrating the attack; Sharif led the campaign that ousted Khan from office in April following a vote of no confidence. Pakistan’s political environment is now a powder keg of violence, uncertainty, and instability, all while the economy faces dire challenges: damages from crippling floods, decades-high inflation, and the risk of energy shortages over the winter.

And in Somalia, two car explosions tore through the capital of Mogadishu last Saturday (Oct. 30) in the deadliest terrorist attack the country has seen in five years. The Somali government must now contend with the persistent and perhaps growing threat of the terrorist group Al Shabab, while also dealing with a food and energy crisis.

2022-11-06T08:08:01-05:00#China #critical minerals #oil and gas #space |
FacebookTwitterEmailPrint this page
Force Distance Times Dispatch
Subscribe to the Force Distance Times weekly newsletter to keep up to date on our latest commentary
We respect your privacy