Moscow is playing with the Nord Stream pipeline as its own personal yo-yo: In late July, Russia resumed flows at reduced levels in an apparent concession to Europe – only to halve deliveries again just days later. Then, last week, Moscow announced a full, three-day shutdown of the Nord Stream pipeline to start August 31, ostensibly for “maintenance.” This turbulence and uncertainty have sent European natural gas futures soaring to their highest level since 2008. And the pain is expected to last. The UK regulator has raised the energy price cap – the max that energy companies can charge households for every unit of energy – by 80 percent. The Belgian premier warned this week that Europe faces a decade of tough winters ahead. (Compounding the problem, in oil, the Russia-backed Caspian Pipeline Consortium confirmed on Tuesday that Russian and Kazakh oil exports via its Black Sea terminal will face at least a month’s disruption each due to repairs – another hit to European energy imports.)

This is economic coercion. It is Moscow weaponizing Europe’s dependence on Russian energy to impose costs, even when doing so comes at a non-trivial cost to Russia itself. As such, Moscow’s approach challenges long-held assumptions about geopolitics in a globalized world. The Nord Stream yo-yo game demonstrates the degree to which modern spoilers are willing to extend confrontation to the market space – and, also, to eat economic hardship for the sake of larger strategic objectives. The big question: How willing is the West to do the same?

There’s a China angle to this LNG debacle, too, and it suggests that the answer is not very: With natural gas prices surging, China is beating Europe to securing US LNG cargoes. Why? Because sellers want to ink 15- to 20-year contracts, and that time span is too long for the EU’s energy transition timeline. And, in part due to weak domestic demand, China is now re-selling some of its LNG to Europe – trading short-term relief for longer-term influence over Europe’s energy supply. In other words, China is buying US LNG, then selling it to Europe in exchange for control of the continent’s market, even as the West claims alignment in fighting authoritarian leverage over the international order. 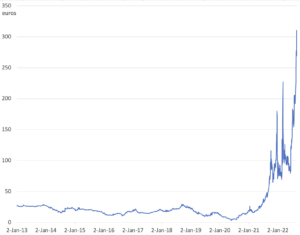 Plus, closer to home: The US has not been spared from the LNG price spike. Gas futures briefly surpassed 10 USD per metric million British thermal units (MMBTU) earlier this week for the first time since 2008. Driving the rally are low gas inventories in the US, increasing LNG exports, rising domestic demand, and only modest growth in shale gas production. These trends run directly contrary to the recent slump in gasoline prices. And the rapid rise in natural gas prices risks crimping any immediate relief in inflation, at least on the energy front – despite the gasoline price drop.

Similar drama holds in the oil market: Last week saw the US withdraw 8.1 million barrels from strategic petroleum reserve, the largest withdrawal since April. This brought the SPR – and, with it, US supply resilience – to its lowest point since 1985. Of course, the resultant vulnerability could be a temporary trend. Last month the Department of Energy announced intentions to conduct SPR buyback via fixed-price forward contracts; to set a price today at which to buy oil from producers tomorrow, effectively shielding producers from price risk. Should it become final, this rule proposal could incentivize production. Already, its prospect has likely contributed to the oil futures curve’s flattening, easing spot prices while raising long-term prices. But in the immediate term, this does not change the reality that even as Russia is flexing its energy muscles, Western resilience risks dwindling.

Meanwhile, in the international oil market, it’s jitters aplenty. Global benchmark Brent crude futures jumped nearly 4 percent on Tuesday on worries that Saudi Arabia would push for OPEC+ production cuts to put a floor on oil price. But futures pulled back the next day as sources from the cartel reassured media that output tightening would not be imminent – and would be timed with the return of Iran to oil markets pending a nuclear deal with Western governments.

Last week, we covered record temperatures shutting down China and squeezing Europe. But this isn’t just a China/Europe matter: Heatwaves and drought are wreaking havoc globally. They are forcing production halts amid power crunches, disrupting transportation logistics, and, in particular, bringing new stress to already-stressed global food supply. In China, the world’s largest grain producer, this year’s grain harvest is at risk. Additional import demand from the world’s biggest food importer would raise prices worldwide. In the US, the world’s third largest agricultural producer, this year’s number of prevented planting acres (read: total area left barren due to various reasons including adverse weather conditions) more than tripled from 2021 to 6.4 million, though levels are still lower than 2020 and 2019. Corn was hit particularly hard, with unplanted corn acres more than quintupling from last year. Unplanted wheat acres nearly quadrupled, and unplanted soybean acres more than tripled.

US prevented planting acres, total and by crop

The tumultuous energy environment promises to compound this problem, too: Soaring energy prices in Europe are forcing major fertilizer plants to shut down, not awesome news for farmers and food manufacturers. On Thursday, Norway-based Yara, the world’s largest fertilizer company, announced that it would cut its ammonia-based urea and nitrogen fertilizer production in Europe by 50 percent. The day before, Britain’s largest fertilizer producer imposed a temporarily halt”of production at its Billingham plant.

Global energy squeeze is bringing new interest to nuclear energy. In markets, uranium stocks are soaring and nuclear power providers outperforming. One of the biggest US nuclear power companies, Constellation Energy, has seen its stock price grow nearly 90 percent this year. On the ground, developments in Japan are bearing this trend out: The Japanese government is planning to restart idled nuclear reactors and extend the lifespans of existing ones, joining a wave of other countries that have renewed interest in nuclear power. This constitutes a major policy turnaround for Tokyo. After the 2011 earthquake- and tsunami-induced Fukushima disaster, Japan idled most of its nuclear plants and ceased constructing new ones. Now, seventeen plants are set to be restarted by next summer as part of a plan to secure energy in the medium- to long-term.

Whether Japan can pull it off is another matter. After years of writing off the nuclear industry, assembling the necessary suppliers and engineering personnel will be a challenge in itself. Still, Japan will need any energy it can produce or procure. Its biggest source of Russian LNG imports, the Sakhalin-2 project, is no sure bet. Mitsubishi and Mitsui are expected to announce that they will continue their investments in the resource development project under a new Russian operator, but there’s little stopping Moscow from changing contractual terms to undermine the two Japanese trading houses’ businesses.

The Jackson Hole forecast: Tight with a chance of pain

The obvious headline that we can’t ignore: Jerome Powell was hawkish and blunt in his Jackson Hole address on Friday, declaring that interest rates must continue rising until the Fed is confident that inflation is under control – no matter the resultant pain. “These are the unfortunate costs of reducing inflation,” Powell said. Markets did not like this. They promptly tanked. The Dow fell three percent, S&P 500 3.4 percent, and Nasdaq Composite 3.9 percent.

Meanwhile, more stimulus in China – and it’s heavy on infrastructure

Meanwhile, Beijing is taking the opposite tack as it grapples with near-opposite economic fortunes, dampened by COVID-19 lockdowns, property crisis, and temperature-induced production halts. The Chinese central bank followed up on last week’s surprise cut of two key benchmark rates (the medium-term lending facility rate and the seven-day reverse repo rate) with a new round of cuts this week – these ones to the one- and five-year loan prime rates. The former is typically used to price corporate loans, and the latter to price mortgages. This move was largely expected. More of a surprise: Beijing also this week rolled out a stimulus package of 19 measures, including 44 billion USD in credit support by policy banks to finance infrastructure projects, plans to launch a new batch of such infrastructure projects, additional agricultural subsidies, relaxation of travel restrictions on business people, and support for private company development and investment. These measures come on top of a package of 33 policies, involving trillions of RMB in economic relief, that Beijing introduced in May. 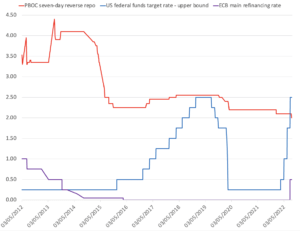 With the landmark 750 billion USD climate, health, and tax bill now officially law, some of the biggest overseas beneficiaries of the legislation are coming more clearly into view. Among them are South Korean businesses, including solar products maker Hanwha Solutions and wind tower manufacturer CS Wind, which are expected to receive hundreds of millions in tax credits. Others are jostling for their piece of the tax credits. Hyundai, for example, is reportedly considering accelerating the start-date for construction of its US EV and battery plant. And Japan’s Panasonic, which supplies batteries to Tesla, appears to be planning an additional 4 billion USD EV battery plant in Oklahoma, on top of another 4 billion USD plant that the company announced plans for last months. Canadian firms are getting a boost, too: This week, Volkswagen and Mercedes-Benz inked deals for Canadian battery materials supplies, in part prompted by the Inflation Reduction act’s sourcing requirements that determine tax credit eligibility.

A big baby step in the US-China audit deal

US and Chinese regulators reached a preliminary agreement on Friday that could avert the mass delisting of some 200 Chinese firms from the New York bourse over Beijing’s objections to Washington’s auditing rules. Under the deal, according to a statement from the US Securities and Exchange Commission, US regulators would be able to inspect the Chinese audit papers in full, without consultation or input from Chinese authorities. But the statement from the Chinese side emphasized that the inspections would be conducted “in accordance with the principle of reciprocity and mutual benefit,” suggesting a degree of Chinese involvement in the process. For now, those inspections are expected to begin taking place in Hong Kong as soon as mid-September, and eventually in mainland China when COVID-19 restrictions are loosened. Whether those inspections can be conducted unobstructed as promised will be the real test. Regardless, this preliminary agreement is unlikely to be the last act in an ongoing saga.

Monday saw a new wave of protests in New Delhi as thousands of Indian farmers gathered to protest what they called empty government promises. This is a sequel not a start: For over a year, from August 2020 to December 2021, Indian farmers held mass protests over a set of farm laws that the government said were intended to deregulate produce markets and farmers said would allow corporations to exploit them. The farmers ended their protests only after the government rolled back the laws in question and agreed to discuss other demands, including guaranteed prices for produce. Now, some five thousand farmers in India are calling the government promises unfulfilled – and on the government to clear their debts and guarantee a minimum support price for all produce. This could be a one-off affair. Or, it could launch another long-term movement, introducing new volatility into the international agricultural market and political landscape.

2022-09-26T09:42:39-04:00#China #drought and heatwave #inflation #natural gas #Russia |
FacebookTwitterEmailPrint this page
Force Distance Times Dispatch
Subscribe to the Force Distance Times weekly newsletter to keep up to date on our latest commentary
We respect your privacy