Like many commodities, wheat has had a wild ride over the past year. Russia’s invasion of Ukraine sent prices of the grain soaring, and they remained significantly above the 10-year average for much of 2022. But US wheat futures for March delivery are now below where they were prior to the war. Relatedly, the UN’s food price index for December is now below where it was last January. Last week’s price slump in wheat was the steepest since August, according to Bloomberg.

There are reasons to believe that the downward pressure on wheat prices may continue: Australia is expected to bring in a bumper crop. Russian wheat exports in the first half of 2023 are set to hit a record. India’s wheat harvest could also jump to a record high thanks to favorable weather and expanded planting in high-yielding areas.

But wildcards remain at play. The UN-brokered Black Sea grain export deal was renewed last November for 120 days. That means an extension is due next month, and Russia could once again refuse to renew it, weaponizing the process in an attempt to secure political and/or military objectives. Major marine insurers’ decision to cease providing war risk coverage in the region has also added to uncertainty. Last week, Ukraine’s seaborne grain flows through the Black Sea corridor fell 35% from the previous week, according to data from the UN’s Joint Coordination Centre for the Black Sea Grain Initiative.

Beyond the Black Sea deal, Russia could also manipulate the global wheat market by restricting exports of the grain through raising export taxes, as the researchers Simon Evenett and Marc-Andreas Muendler point out in a note this week. In their model, if the Kremlin raises export taxes to a level that cuts wheat exports by half, the median wheat importer would pay 9% more for wheat than before the war. As they write: “Conceivably, Russia could stockpile plenty of wheat and then engage in ‘wheat diplomacy’ with countries that are desperate to feed their populations. The Black Sea deal is important but it isn’t the only game in town.” 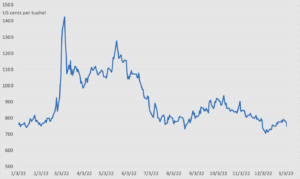 Now, they are preparing a new round of sanctions, this time putting a price cap on Russian refined petroleum products like diesel and fuel oil. The new sanctions are expected to take effect on February 5, the same day the EU will ban the import of Russian oil products.

Together, the stepped-up sanctions and expanded EU embargo will reconfigure trade flows and shake up global markets. The International Energy Agency expects the ramifications to be “significantly more complex than what we have seen already on the crude side.”

Several factors make the new sanctions more complicated than the existing ones on Russian crude. One, Russia has been able to tap a “shadow fleet” of tankers to reroute some (emphasis on some, not all) of its crude to Asia markets; however, the fleet of specialized ships capable of carrying petroleum products is smaller, limiting Russia’s options. Two, India and China are major refiners, so may be unlikely to buy Russian petroleum products shunned by Europe.

A unit of China’s Tianqi Lithium this week made a 94 million USD bid for Australian lithium developer Essential Metals. Tianqi Lithium Energy Australia (TLEA) is a joint venture between the Shenzhen- and Hong Kong-listed Tianqi, with a 51% stake, and Australian miner IGO, with the remaining 49%. Essential owns the early-stage Pioneer Dome lithium deposit in Western Australia, which has an estimated total reserves of around 129,000 tons of the metal.

With Essential’s board supporting the deal, it’s now up to Australian regulators to decide whether to approve a sale of the country’s natural resources to a strategic rival. Through TLEA, Tianqi already has valuable assets in Australia: The JV owns a 51% stake in Greenbushes, one of the world’s biggest lithium mines; it also owns a lithium hydroxide refinery that processes material from Greenbushes. Pioneer Dome is about 600km away from Greenbushes, suggesting Tianqi’s acquisition is driven by a desire to establish a foothold in another lithium region, rather than simply building out the Greenbushes one.

Remarks in November by Australia’s treasurer Jim Chalmers hint at which way the wind is blowing. Australia, he said, needs to be “more assertive about encouraging investment that clearly aligns with our national interest in the longer term.”

More volatility could be in store for the global nickel market. According to Bloomberg, China’s Tsinghan Holding Group is in talks with some Chinese copper plants about rejigging their operations to process nickel into a refined metal. That product currently commands a large premium over the intermediate products that are the mainstay of Tsinghan’s current nickel production mix, namely ferronickel and mixed hydroxide precipitate. Tsingshan’s ability to meet demand for refined nickel metal would be a lucrative opportunity for the company; it would also help Tsingshan better hedge its bets on the London Metal Exchange.

A quick recap: Last March saw a gigantic nickel short squeeze. Tsingshan, unbeknownst to the exchange, had amassed large positions on the price of nickel falling. But the bet coincided with sanctions on major nickel producer Russia, causing prices to surge some 270%. Tsingshan, despite being the world’s largest nickel producer, didn’t produce nickel metal to deliver against LME contracts to mitigate the short squeeze. The LME took the radical step of suspending nickel trading for a week and cancelling billions of dollars’ worth of trades. The exchange has been grappling with the chaotic fallout in the months since.

This week, an independent report on the nickel debacle urged the exchange to strengthen rules and oversight to prevent a similar kind of short-term market distortion from playing out again. The LME has said it largely agrees with the external report’s findings, and it’s expected to outline reforms by the end of the first quarter.

US inflation cools, but risks remain

Good news on the US inflation front: The consumer price index, on an annual basis, has cooled for six straight months. The CPI reading came in at 6.4% year-on-year in December, and fell by 0.1% compared to November. Core inflation readings, which exclude food and energy, also offer reassurances: Core inflation in the fourth quarter of 2022 was 3.1% on an annualized basis, a steep drop from 7.9% in the second quarter.

Slowing inflation plus the healthy labor outlook as reflected in last week’s job report is as good a combination as any for hopes of achieving a “soft landing” of tamed prices while avoiding an economic recession. The market seems to believe the same: Yields on 10-year Treasury bills have fallen sharply over the past two weeks, and investors increasingly believe the Fed could dial down the the pace of its rate tightening.

Still, risk factors remain – including, say, another energy price shock from the expanded Russian oil products sanctions. And input shortages continue to plague manufacturers. The latest ISM Manufacturing report, for instance, indicates that electrical components, electronic components, and semiconductors have been in short supply for 27, 25, and 25 consecutive months respectively. 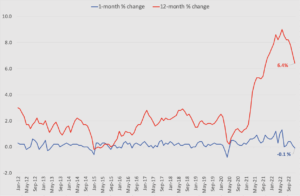 Meanwhile, the IMF has some cautious optimism for the global economy, predicting growth to rebound later this year and a “higher growth trajectory in 2024.” That’s a cheerier note than the World Bank’s steep downgrade of global growth forecasts to 1.7% from its previous projection of 3%. Major US banks are buckling down for a bumpy economic ride ahead: The four largest commercial banks stowed away 2.8 billion USD in the last quarter of 2022, in anticipation of potential loan losses.

A small step towards reindustrialization

The South Korean solar energy firm Q Cells, part of the broader Hanwha conglomerate, this week announced a 2.5 billion USD investment to expand its existing solar panel factory in Georgia, and open a second plant there with production slated for 2024. It’s the largest foreign direct investment in US solar manufacturing, according to fDi Markets. The new factory will make solar panel components not currently produced in the US, including silicon ingots, wafers, and cells.

For Washington, Hanwha’s announcement is a sign that the massive green subsidies, tax credits, and other incentives offered by the Inflation Reduction Act are prompting new investment in the American industrial base. US president Joe Biden touted Hanwha’s investment as a “direct result of my economic plan and the [IRA].” (Note: We ran commentary from Harry Moser this week about the limitations of a subsidy-based approach to reindustrialization.)

Across the Atlantic, the response is less positive. German chancellor Olaf Scholz wants the EU to create new financing tools to compete against Washington’s green subsidies. And Politico scooped on Friday that the French government has pitched a sweeping “Made in Europe” strategy to counter a flood of US subsidies.

And even as Georgia claims victory in attracting Hanwha’s landmark investment, projects elsewhere have been put on pause due to uncertain conditions. According to the Korea Economic Daily, Ford Motor and SK Innovation’s battery unit, confronted by rising global interest rates and weaker EV demand in Europe, this week canceled plans for an EV battery plant in Turkey.

The Swedish state-owned miner LKAB announced this week that it had found Europe’s largest rare earths deposit in the country’s northern Kiruna area. The company says the deposit contains over 1 million tons of rare earth oxides. No rare earths are currently mined in Europe, and with complex permitting processes, it could be 10 to 15 years before operations begin at the Kiruna mine. When commercial mining does commence, the mine could become a significant upstream node for Europe’s rare earth supply chain. LKAB has already taken steps to build the midstream segment: In November, it became the largest investor and owner of Norwegian rare earths processing firm REEtec.

Japan ramps up its security pacts

This week saw a flurry of expanded security initiatives between Japan and its G7 allies, less than a month after Tokyo unveiled its revamped national security strategy. The subtext underlying the new security deals is China: How to deter military aggression from Beijing, and how to counter that aggression if deterrence fails.

Among the most significant announcements is a series of steps to bolster the US-Japan military alliance. This includes an extended security treaty between the two countries: Washington will protect Japanese satellites, help Japan acquire “counterstrike capability” by equipping it with hundreds of long-range missiles, and launch a new deployment arrangement of US Marines in Okinawa.

Tokyo also signed a landmark security deal with the UK, allowing forces to be deployed in one another’s countries. Separately, Japan and Italy upgraded their relationship to a strategic partnership, while Tokyo and Paris agreed to run joint defense exercises and pledged closer cooperation in the Indo-Pacific.

2023-01-15T11:12:16-05:00#inflation #rare earths #sanctions #wheat |
FacebookTwitterEmailPrint this page
Force Distance Times Dispatch
Subscribe to the Force Distance Times weekly newsletter to keep up to date on our latest commentary
We respect your privacy