The EU’s ban on Russian oil products is a mere weeks away, winter looms, US diesel prices rise, and the energy crisis is a global affair – with developing economies on the frontlines. Plus, deflation hits China while the US sees a slight breather in inflation, Xi Jinping prepares to visit Saudi Arabia, competition in major metal exchanges, and the neon market heats up while palm oil cools. Oh and then there’s FTX chaos.

As winter looms, the energy crisis is a global affair

Sweeping EU sanctions on Russian oil are scheduled to take effect on December 5. This will impose new strain on already squeezed international energy markets, right as winter weather kicks in. And it’s not just Europe that will feel the consequences. While the continent has so far borne the brunt of the energy crisis – or at least high-profile narrative attention to it – this is a global market, and corresponding global squeeze.

In particular, developing countries are feeling the pinch, and with potentially tumultuous implications: Colder temperatures are on the horizon and Europe has snapped up much of the available fuel. Suppliers have diverted long-term supplies away from Asia to the lucrative spot market, driving up prices as developing economy buyers compete against richer nations for the fuel. Adding to developing countries’ challenge is the strong dollar, which makes energy imports more expensive and increases their debt burdens. To whit: Pakistan will be forced to ration natural gas supply this winter amid shortages and a foreign exchange crisis.

None of this is unexpected. In fact, as early as March, analysts had warned that “Europe and Asia are heading toward fierce energy competition that will disproportionately hit importers in developing and emerging countries in South Asia and South America.” The question, of course, is what it means: Already, recent months have seen growing political instability in developing economies in response to rising prices and supply shortages. What will happen this winter as the brunt of the squeeze kicks in?

Nor is the developed world, including the US, immune to the present energy shortage. Strong demand and reduced global production are pushing up US diesel costs. That’s adding another source of upward inflationary pressure to the US economy because diesel affects the cost of almost every product: goods moved by truck, rail, and ship, for example, or food products planted and harvested using machinery that run on diesel. For the one in five homes that use diesel for heating, energy bills are forecast to rise 27 percent this winter.

For the first time in nearly two years, Chinese factory gate prices turned negative. The producer price index (PPI) fell 1.3 percent year-on-year in October, reversing a 0.9 percent gain the month prior. Consumer inflation also moderated, with core inflation up 0.6 percent, unchanged from September. Together, the decline in producer prices and easing consumer underlines weakening domestic demand under the triple pressures of Covid lockdowns, the real estate slump, and global recession fears, which will drag on exports. Factory gate prices that notched the steepest falls include prices in coal mining and washing (-16.5 percent), ferrous metal smelting and rolling (-21.1 percent), and construction materials and non-metal materials (-5.1 percent). All this is fueling worries of a deflationary spiral—which, as Japan’s past decades show, can be just as persistent and damaging as an inflation. 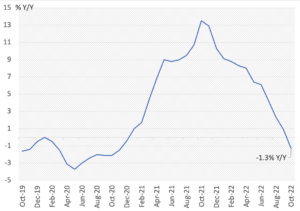 The latest CPI report showed encouraging signs: Consumer prices were up 7.7 percent year-on-year in October, while core inflation (excluding food and energy) is at 6.3 percent over the same period. That’s a substantial moderation compared to previous months, and could be a hopeful indicator that prices may be easing. Investors took note, sending the S&P 500 and Nasdaq up over 5.54 and 7.35 percent respectively on Wednesday in the biggest single day rally since 2020. Investors may also have been reacting to turmoil in the crypto world, plowing money into safe(r) havens.

But remember that encouraging signs do not mean problem solved. Nationwide prices are still at historic highs. And more shocks can emerge to push prices up again – winter, after all, is on the horizon in an increasingly constrained supply environment. Plus, the Federal Reserve has said it needs to see consistent signs of slowing inflation, not a one-month blip. All of which is to say, the inflation relief could prove…transitory. 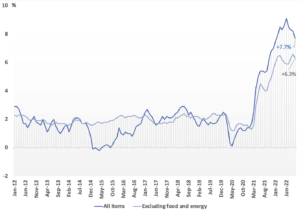 Chinese leader Xi Jinping intends to visit Saudi Arabia before year end, according to the Wall Street Journal. That visit would come five months after US president Joe Biden’s trip to the kingdom, a high-stakes and closely scrutinized trip that ultimately failed to deliver the oil production deal that Washington thought it would secure. Instead, the Saudi-led OPEC+ announced production cuts in October in what looked like explicit support for Russia; two weeks later, Saudi Arabia held talks with Beijing on supporting each other’s energy interests in the global oil market. Contours of the Russia-China-Saudi Arabia oil nexus are coming into clearer focus, and Xi’s upcoming summit with Saudi Crown Prince Mohammed bin Salman will further strengthen the three countries’ emerging strategic alignment.

Could Chicago’s CME Group muscle in on the London Metal Exchange’s turf in global industrial metals trading? CME is certainly trying to do so. While the LME deals with the fallout of this year’s chaotic nickel short squeeze and mulls a potential ban on Russian metals, CME is working to win traders over to its own aluminum and cobalt contracts, and may launch its own nickel contract. It’s already enjoying some early and rapid success: Since the beginning of 2022, open interest in its aluminum and cobalt futures contracts are up over 400 and 500 percent, respectively.

For now, the LME is still the undisputed titan: Open interest in its aluminum contract stands at 14 million tons, versus 30,000 tons for its emergent rival across the Atlantic. Plus, CME will also have to contend with the tricky decision of whether to ban metals from Russian producers. Plus, there’s competition coming from the Singapore Exchange, too, which just launched its own cobalt and lithium contracts in September. All of this could add up to prompt the globalized metals market to splinter into smaller regional ones, eroding the LME’s pricing power.

Two Ukrainian companies make up around 50 percent of global output of semiconductor-grade neon, critical for lasers used to make chips. Russia’s invasion disrupted supplies of the gas. Now, global chip giant TSMC is looking to secure local supplies of neon from Taiwan producers in an effort to better protect its supply chain. South Korean chipmaker SK Hynix also wants to reduce import reliance for neon. Last month, it pledged to procure 100 percent of its neon needs domestically by 2024, up from 40 percent currently.

Weak demand and a cloudy global economic outlook are weighing on another commodity: palm oil, used for everything from cooking and food products to detergents  and cosmetics. Just six months ago, prices of the commodity skyrocketed, prompting Indonesia, the world’s largest palm oil producer, to impose a temporary export ban on the commodity and Malaysia to eye a lucrative opportunity to expand market share. Now, palm oil producers face falling prices and declining demand. Europe wants to phase out palm oil; Chinese imports have plummeted.

This week, in a stunning and swift reversal of fortunes, FTX collapsed and filed bankruptcy. The crypto exchange had been seen as an industry leader and a dependable backstop. Only months ago, its founder, Sam Bankman-Fried, was dubbed “JPEG Morgan” and “crypto’s white knight” as he swooped to bail out other embattled crypto firms.

But in the end, what spelled the rapid demise of other crypto outfits ultimately afflicted FTX, too: A bank run to the tune of six billion dollars in 72 hours after rival exchange Binance decided to sell roughly 530 million dollars worth of FTX’s native FTT tokens – and corresponding liquidity crunch. Binance offered to bail out FTX, only to back away from the deal a day later. That left FTX scrambling in vain to raise billions, before it was forced to file for bankruptcy. As Bankman-Fried said of Binance’s CEO Changpeng Zhao: “well played; you won.”

The full consequences of FTX’s collapse will take time to play out. One effect is already clear, however: Binance’s stature in the crypto industry has been further consolidated—just as new reporting purportedly shows the exchange processed Iranian transactions worth 8 billion USD since 2018 despite US sanctions.